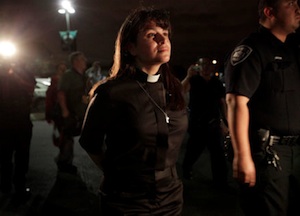 While Texas Gov. Rick Perry and a gaggle of legislators hark back to 19th century glory and introduce proposals to reclaim their state’s “sovereignty” over federal laws this week, long-time political activists in Texas and across the country are recognizing the galvanizing impact of DREAM Act activists and student hunger strikers on the future.

Now bogged down in the lame duck Congress over political maneuvers more than merits, the proposed DREAM Act would provide an opportunity for permanent residency for certain minors who had been brought into the country without documentation after a stringent 10-year waiting period and completion of a 2-year degree or military service.

Despite the growing support of the DREAM Act from university chancellors–and Pentagon officials, among other Obama administration officials–the bill’s prospects look increasingly dim.

“Whether the DREAM ACT passes or fails,” former San Antonio city councilwoman Maria Berriozábal said in a special interview, “the issues of immigration reform and sustainability are not going away. The DREAM Act is the new line in the sand, and when election time comes Democrats and Republicans will be asked which side they were on.”

Facing a shifting electorate in 2012 and beyond, Berriozábal added, “a new generation of activists has been emboldened by this experience.”

Perhaps no other activists in the country have stood out more than the University of Texas-San Antonio student hunger strikers and their allies in San Antonio, who have passed nearly a month in a protest fast.

Inspired by their resiliency and organization, Berriozábal passed a night in jail for the first time in her life alongside 15 other protestors after getting arrested in a nonviolent sit-in at US Sen. Kay Hutchison’s office in San Antonio on Nov. 30th.

“I think the hunger strike started to bring people together from beginning,” Berriozábal said. “If the students hadn’t done this, there wouldn’t have been a public debate in this city or this state.”

“The strike has now grown to 50 people from 4 different states. I have been deeply moved by the inspiration, courage, tenacity and sacrifice that these students have shown and I have decided to join their hunger strike until Congress passes the DREAM Act…
In short, these students have done very well despite all the obstacles they have faced growing up and now they are ready to give back to the United States…if Congress would only let them.

Senator Hutchison, it still is the right thing to do. You and your Republican colleagues have a chance to show that the Republican Party does have compassion by doing the right thing, passing the DREAM Act, and giving these students a chance. Anything less is simply being mean-spirited and un-American.”

Here’s a clip of the students speaking out at the Nov. 30th sit-in:

With over a half century of activism experience, the 69-year-old Berriozábal served on the San Antonio city council for a decade in the 1980s. Founder of Hispanas Unidas teen pregnancy prevention center, and active with the Santuario Sister Farm, she has been a leading political figure in the state on immigration and environmental issues for decades.”We stand on the shoulders of people who have been doing this for years,” Berriozábal said. “I was an elected official. I took care of the jail. I saw that there was mercy. Once I was outside the system, I remained active as a citizen, at public hearings, at city hall or the state legislature. This time the students did it–I followed them.”

Currently at work on a memoir of her family’s 100-year contributions and challenges in the United States, Berriozábal also noted the unique role of Rev. Lorenza Andrade Smith, a United Methodist minister arrested at the sit-in on Nov. 30th, who remains in jail on a hunger strike. Without shoes or socks in the cold jail cell, Andrade Smith’s calmness under pressure affected other prisoners.

“She’s a very powerful person,” Berriozábal said of the Methodist minister. “In a world of macho, punitive methods, she affirmed again the inner power of humans, no matter the situation. She showed me what inner strength, big heart and love does, and that is what we need now amid so much hate in this debate.”

Andrade Smith’s example has electrified DREAM Act activists and citizens across the country. According to Ruben Castilla Herrera, an Ohio organizer for Immigration Reform with the Ohio Action Circle:

“Rev. Andrade is showing us that to profess our faith is only a part of what it is to be a person of faith. It’s really not enough. When it pertains to “liberty and justice for all”, one must take direct action and many times this is civil disobedience. Justice and the law are like cousins, they are related but not always always aligned and in agreement. As an immigration reform organizer and activist and a person of faith, she is witnessing real risk taking faith. Most just talk about it, she is acting on it. “

While the fate of the student hunger strikers remains as precarious as the DREAM Act itself, Berriozábal noted that their future as political and social leaders–and American citizens– was inevitable.

“Win or lose,” she said, “something has happened to San Antonio, and the nation.”