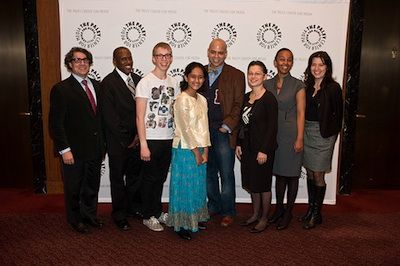 Several young filmmakers were honored on Nov. 12 at the 2010 PLURAL + Youth Video Festival Awards Ceremony. The festival, organized by the International Organization for Migration (IOM) and the U.N. Alliance of Civilizations, called on youth from around the globe to submit short films about migration and diversity. The winning films were screened at the ceremony, which took place at the Paley Media Center in Midtown.

George “Rithm” Martinez, founder of Global Block and U.S. Cultural Envoy, hosted the ceremony. Martinez pointed out that efforts to confront migration issues need more traction in the United States, which is home to approximately one-fifth of the world’s migrant population, and stressed the importance of youth involvement. According to the IOM, approximately 16 percent of international migrants — over 35 million people — are between the ages of 15 and 24. Sometimes the percentage is much higher — for example, over half of the 900,000 Mexicans who migrated to the United States in 2009 fell into this age range.

The winning films approached the subject in different ways. Ten-year-old Aarohi Mehendale used everyday footage from her hometown of Bangalore, India in her film Just Let Differences Be, which won for the 9-12 age category. The footage presented a vision of the different communities of Bangalore interacting in both spectacular and mundane ways. “Forget about the differences,” she said, “and be happy that we have a real diverse world.”

Martina Hudorovic used a more personal approach in her film Young Ladies, which won for the 13-17 age category. Martina interviewed two Roma girls in her home country of Slovenia. The girls expressed both pride in their Roma heritage and frustration with the prejudice they face, but Martina strove to show that their primary concerns and preoccupations — school, friends, family — were identical to youth in other parts of the world.

Sebastian Kraner, a university student from Vienna, Austria, won the 18-25 age category for his film, Nine Months, a reflection on his alternative service; Sebastian chose to spend nine months helping in a home for asylum-seeking youth rather than six months in the military. Sebastian used the film to contrast the fears young migrants have about exclusion and deportation with the fears some Austrians have about immigrants.

Ryan Tan Chuan Min was honored with the Paley Center Media Education Award for his film, Unity, Peace, and Tolerance, a humorous take on diversity in his home country of Malaysia.  “Do not always focus on the weaknesses of others,” he said, “we are all imperfect!”  Several other films — including two from the United States — also received recognition from the competition’s sponsors.

The wide range of entries reflected the appeal to diversity in the festival’s mission. But while the United Nations may be making progress in raising awareness, the level of international migration remains as high as ever, and cultural tensions are heating up in many parts of the world.  If the films had a common message, it was that solving world migration issues does not only require viable institutions and policies, but also demands that we confront prejudices and paranoia about foreign communities.

“There are some borders in the thinking of the people,” said Sebastian Kraner, “and they must be broken down.”

For more information, and to view the winning videos, go to: unaoc.org/pluralplus.