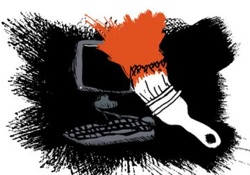 This article was originally posted on CommonDreams.org from Truthdig.com.

One of President Barack Obama’s signature campaign promises was to protect the freedom of the Internet. He said, in November 2007, “I will take a back seat to no one in my commitment to network neutrality, because once providers start to privilege some applications or websites over others, then the smaller voices get squeezed out and we all lose.”

Jump ahead to December 2010, where Obama is clearly in the back seat, being driven by Internet giants like AT&T, Verizon and Comcast. With him is his appointed chairman of the Federal Communications Commission, Julius Genachowski, his Harvard Law School classmate and basketball pal who just pushed through a rule on network neutrality that Internet activists consider disastrous.

Free Press Managing Director Craig Aaron told me, “This proposal appears to be riddled with loopholes that would open the door to all kinds of future abuses, allowing companies like AT&T, Comcast, Verizon, the big Internet service providers, to decide which websites are going to work, which aren’t, and which are going to be able to get special treatment.”

For comedian-turned-senator Al Franken, D-Minn., the new rules on Net neutrality are no joke. He offered this example, writing: “Verizon could prevent you from accessing Google Maps on your phone, forcing you to use their own mapping program, Verizon Navigator, even if it costs money to use and isn’t nearly as good. Or a mobile provider with a political agenda could prevent you from downloading an app that connects you with the Obama campaign (or, for that matter, a tea party group in your area).”

AT&T is one of the conglomerates that activists say practically wrote the FCC rules that Genachowski pushed through. We’ve seen this flip-flop before. Weeks before his 2007 net neutrality pledge, then-Sen. Obama took on AT&T, which was exposed for engaging in warrantless wiretapping of U.S. citizens at the request of the Bush administration. AT&T wanted retroactive immunity from prosecution. Obama campaign spokesman Bill Burton told Talking Points Memo: “To be clear: Barack will support a filibuster of any bill that includes retroactive immunity for telecommunications companies.”

But by July 2008, a month before the Democratic National Convention, with Obama the presumptive presidential nominee, he not only didn’t filibuster, but voted for a bill that granted telecoms retroactive immunity from prosecution. AT&T had gotten its way, and showed its appreciation quickly. The official tote bag issued to every DNC delegate was emblazoned with a large AT&T logo. AT&T threw an opening-night bash for delegates that was closed to the press, celebrating the Democratic Party for its get-out-of-jail-free card.

AT&T, Verizon, cable giant Comcast and other corporations have expressed support for the new FCC rule. Genachowski’s Democratic Party allies on the commission, Michael Copps and Mignon Clyburn (the daughter of House Majority Whip James Clyburn), according to Aaron, “tried to improve these rules, but the chairman refused to budge, apparently because he had already reached an agreement with AT&T and the cable lobbyists about how far these rules were going to go.” Clyburn noted that the rules could allow mobile Internet providers to discriminate, and that poor communities, particularly African-American and Latino, rely on mobile Internet services more than wired connections.

Aaron laments the power of the telecom and cable industry lobbyists in Washington, D.C.: “In recent years, they’ve deployed 500 lobbyists, basically one for every member of Congress, and that’s just what they report. AT&T is the biggest campaign giver in the history of campaign giving, as long as we have been tracking it. So they have really entrenched themselves. And Comcast, Verizon, the other big companies, are not far behind.”

Aaron added: “When AT&T wants to get together all of their lobbyists, there’s no room big enough. They had to rent out a movie theater. People from the public interest who are fighting for the free and open Internet here in D.C. can still share a cab.”

Campaign money is now more than ever the lifeblood of U.S. politicians, and you can be sure that Obama and his advisers are looking to the 2012 election, which will likely be the costliest in U.S. history. Vigorous and innovative use of the Internet and mobile technologies is credited with helping Obama secure his victory in 2008. As the open Internet becomes increasingly stifled in the U.S., and the corporations that control the Internet become more powerful, we may not see such democratic participation for much longer.

Amy Goodman is the host of “Democracy Now!,” a daily international TV/radio news hour airing on more than 800 stations in North America. She is the author of “Breaking the Sound Barrier,” recently released in paperback and now a New York Times best-seller.