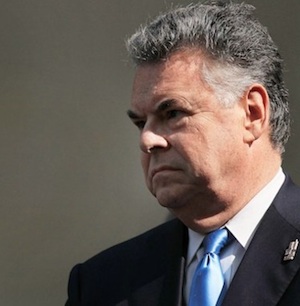 Get ready, because it’s coming. The race-baiting of this year’s election will become the business of the House of Representatives beginning in January. There will surely be hearings on the Constitution’s birthright citizenship clause. And New York Rep. Peter King, who will chair the Homeland Security Committee, vows in today’s Newsday that he will hold hearings on the “radicalization” of American Muslims.

The great majority of Muslims in our country are hardworking, dedicated Americans. Yet a Pew Poll showed that 15 percent of Muslim Americans between 18 and 29 say suicide bombing is justified. I also know of imams instructing members of their mosques not to cooperate with law enforcement officials investigating the recruiting of young men in their mosques as suicide bombers. We need to find the reasons for this alienation.

There’s a disconnect between outstanding Muslims who contribute so much to the future of our country and those leaders who – for whatever reason – acquiesce in terror or ignore the threat. It is this disconnect that threatens the security of us all.

As chairman of the Homeland Security Committee, I will do all I can to break down the wall of political correctness and drive the public debate on Islamic radicalization. These hearings will be a step in that direction. It’s what democracy is all about.

King is unapologetic to critics that he’s launching a witch hunt. Indeed, his Newsday op-ed is a full-throated rejoinder to that paper’s critical editorial board. He writes that he still has “anger and outrage” about “prominent Long Island Muslim leaders” who questioned whether terrorists were truly responsible for the 9/11 attacks.

“Even more troubling is that to this day, no Muslim leader has denounced those vile remarks,” he writes. “Nor did Newsday say a word about these slanders—no moral outrage or condemnation. … As I became more immersed in attempting to unravel the radical Islamic threat to our nation and our civilization, it became more and more obvious to me that the moral myopia of Long Island’s Muslim leaders and their apologists in the media was the rule—and that there were few exceptions.”

So now it’s payback time, apparently. King’s got ahold of the gavel and the mic, and American Muslim leaders will have to come before him to answer for themselves and their community. It will be an ugly business, to be sure. And it will not be singular in the 112th Congress.