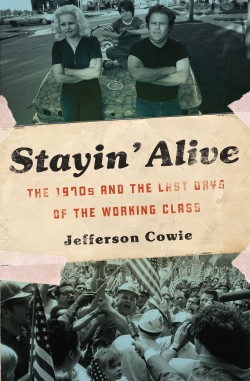 The 1970s are the Rodney Dangerfield of decades—they get no respect. Maybe it’s because those were the years in which I grew up and I am overly sensitive, but I doubt it’s just me. For so long, the ’70s were the forgotten years between two eventful decades, the ’60s and ’80s, decades that had obvious political and social meaning. We know they mattered. But the ’70s are more complicated. They should not be ignored as mere prelude or epilogue, and should not be so easily dismissed with a joke.

In recent years, there has been a new interest in the ’70s, as scholarly books by Alice Echols (on disco and gender), Judith Stein (on political economy) and now Jefferson Cowie (on working-class culture) have joined others in redefining what we must now see as a pivotal decade. Cowie and others—including the various authors of Rebel Rank and File: Labor Militancy and Revolt From Below During the Long 1970s, reviewed on this site last week—are reclaiming the ’70s, reminding us we have much to learn from the decade that gave us the hustle and “Sweat Home Alabama.”

Cowie’s Stayin’ Alive: The 1970s and the Last Days of the Working Class seeks to turn our understanding of the decade on its head. Combining an astute cultural reading of the times with one eye always turned to politics, Cowie unravels how America went from a nation with a strong union core, a luke-warm liberal consensus and a growing economy to a nation of rising unemployment, staggering inflation and de-industrialization.

In short, he asks: How did we get here from there?

The standard understanding of the 20th Century is to see it through the lens of what has been called the New Deal Order. Cowie reminds readers that the New Deal may not be the natural political state or norm we have come to believe. We must stop comparing every political moment to it in the hopes of imagining a new New Deal. If New Deal was the product of a specific set of historical circumstances, it ain’t coming back.

Cowie is at his best, however, when writing about the working-class culture of the ’70s. From Bruce Springsteen and Merle Haggard, to Saturday Night Fever and Dog Day Afternoon, to Archie Bunker, he explores the transformation of the working class as presented and represented in the mass media. We see working-class anger against unions and bosses and we see the claustrophobia of working-class life.

That seems to be the major theme Cowie finds in articles, books, working class voices and popular culture. There is a loss that seems so all-embracing that escape is the only option.

Cowie reminds us that the mass exodus of white working-class voters did not happen in 1980, but happened first in 1972. Labor, after all, did everything it could to help defeat McGovern in 1972 and many on the left never forgot. Nixon found a way to speak to the white working class in ways the Democrats had forgotten. The politics of culture and representation are central to understanding the decade. “Class, always a fragile concept in American civic life, died the death of a thousand cuts in the 1970s…,” political, cultural and economic.

There are several turning points in this book, and plenty of blame to go around. One surprising section of the book deals with the movie Saturday Night Fever, a film I have always loathed. But Cowie’s keen analytical eye dissects the film exposing its larger cultural meaning. The movie’s theme is, as he writes, that “Class is neither a community nor a culture nor occupation nor power but a mere affect that the select few, the chosen ones, can drop.”

He continues that class is “some distant geographic or temporal past.” The metaphors that are critical for the decade are the loss of opportunity and the hope of escape. The heros of working-class culture, the Rockys and Tony Maneros, get out while they still can. They leave the working class behind.

Stayin’ Alive is an important book that needs to be read carefully by political activists, liberals, progressives and unionists. There are lessons that need to be learned about the power of culture that we cannot afford to ignore.