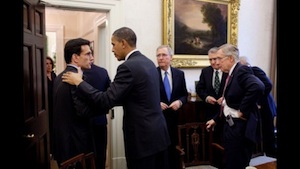 President Barack Obama’s Grand Compromise to extend tax cuts for the super-rich for two years and extend unemployment compensation for 13 months has uncapped a long-smoldering, furious response from frustrated labor and congressional progressives who had been reluctant to publicly fight with the president.

In the words of Congressman Anthony Weiner (D-NY), Obama has been too often “punting on third down” rather than battling to the end to extract the best possible deal from the stonewalling Republicans. Sen. Bernie Sanders flatly called it a “bad, bad deal” and expressed a willingness to stage a filibuster against passage of the plan.

Even the centrist New York Times editorialists called the deal “a win for the Republicans and their strategy of obstructionism and a disappointing retreat by the White House.”

‘WE WANT HIM TO FIGHT’

United Steelworkers President Leo Gerard stated emphatically, “He didn’t get the deal he should have gotten. We want him [Obama] to fight.” Gerard remains deeply concerned that the sacrifice of tax revenues from the hyper-wealthy will deprive the government of funds needed for a successful escape from the lingering Greater Recession.

“We need to take the money they [the ultra-rich] would save and put it into job creation,” Gerard told MSNBC host Ed Schultz Monday night.

The progressive reaction was ignited by the tax-enemployment compensation compromise, but doubts about Obama’s timid leadership had been intensifying in the wake of the president’s premature capitulations to the Republicans and Corporate America since the Nov. 2 electoral massacre.

These include a self-defeating shift in focus from job creation to deficit reduction and promoting a new, NAFTA-style trade deal with South Korea that Jane Hamsher labeled “a suicide mission for the 2012 election” with 86% of voters worrying about the export of US jobs.

The Obama administration’s bargaining skills—providing 13 months of extended unemployment benefits, coupled with a temporary payroll tax reduction for workers, in exchange for a two-year extension of the Bush year tax cuts for those millionaires and billionaires—produced precisely no change in the Republicans’ typically intransigent position, as Rep. Alan Grayson (D-Fla.) pointed out.

Moreover, the Republicans walked away with a major concession: an exemption of fortunes under $5 million from any inheritance taxes

Obama defended his strategy as preventing the jobless—with about a million families already cut off as of Dec. 1—from becoming “collateral damage.” But  Obama had already undercut his own bargaining position by signaling through David Axelrod weeks ago that he was willing to cut a deal along the lines of yesterday’s pact.

White House strategy behind the unemployment compensation angle of the compromise remains murky. Republicans had adopted a highly unpopular  position of very visibly going all-out for the very richest Americans with no concern for the $1 trillion cost of extending the Bush tax cuts ($700 billion plus $300 billion in interest) for another 10 years.

Yet they hypocritically applied, for the first time in history with unemployment so high at 9.8%, a Scrooge-like standard on jobless families.

The Republicans had demanded that every penny of the much smaller $26 billon in the final cost of extended UC benefits be covered by offsetting cuts in domestic spending.

In doing so, the Republicans not only revealed their double standard, but also stated their commitment to eventually providing extended benefits. Obama and his team could have used this to box the Republicans in.

Thus, Obama and his team could have  waged a fight spotlighting the GOP’s preoccupation with the ever-prospering super-rich while barely concealing their indifference to jobless families facing Christmas without any money.

Rep. Weiner pointed out that Republicans, while holding the nation’s unemployed hostage until a tax windfall for the rich was granted, also face their own constituents demanding extended benefits.

Meanwhile, Democratic consultants had been insisting, as Sam Stein reported, that “Democrats, indeed, are going into the last week or so of debate fully aware that they are moving against the tide of public opinion. And they are doing it despite the private warnings of their own advisers.” The consultants had urged the Dems to take on this fight that would clarify the basic loyalties of each party: “[T]he party cannot afford to put it off—or let it slip away.”

Letting the battle “slip away” to 2012 merely puts the Democrats on much less favorable terrain at that point. The two-year extension of the tax cuts for the richest 2% will mean that Democrats—already badly shaken by the earthshaking loss of at least 63 House and six Senate seats—will be facing the very same choice on the super-rich tax-cut extension two years from now, with 2012 elections hanging over the decision.

That would seem to increase the likelihood of a huge long-term increase in the deficit, as Paul Krugman argues, adding to the momentum behind the senseless push to attack Social Security and Medicare as proposed by the thoroughly reactionary Simpson-Bowles commission on deficit reform.

The newly-unveiled tax cuts for the rich-UC extension for the jobless has deepened worries that Obama is compounding the Democrats’ fatal problem with its very identity, already evident on Nov. 2.

Even voters who placed primary blame for the economy on Wall Street bankers and hedge funds went decisively Republican: “Wall-Street-blaming voters supported Republicans by 56 to 42 percent. The Obama administration’s association with bailing out Wall Street bankers apparently had a negative effect on Democratic performance,” according to a summary of findings by Democratic strategists Ruy Texeira and  John Halpin.

As Joan Walsh of Salon.com stated last night, “Now people really don’t know what the Democrats stand for. Once again, the Democrats didn’t deliver for their base.”

Regardless of whether Democrats in Congress can stop this tainted compromise from being enacted, the wide split between Obama and his most ardent backers of 2008 is obvious.

In the words of long-time organizer Marshall Ganz, Obama had campaigned as a transformational candidate, but governed as a “transactional” president fixated on cutting deals that delivered only limited visible change without regard to a broader vision of change or continually winning over his base.
But Obama’s lack of rootedness is only part of the problem facing labor and progressives. Virtually all the intense pressure on Obama has been coming from the Right, observed strategist and author Prof. Frances Fox Piven last year.

No, Obama has not been the reincarnation of FDR for whom we had hoped.

But somehow, neither have we been able to generate the “street heat” that the CIO and the bold progressive organizations did in the 1930s that enabled FDR to look moderate by comprison.