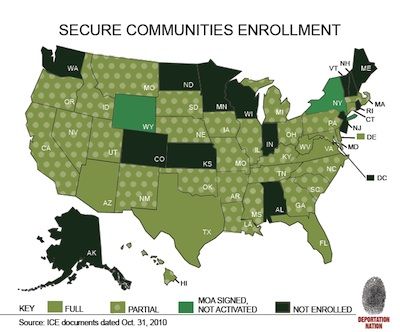 Since it began in the final months of the Bush administration, Secure Communities has quickly spread. Thirty-four states now use the program to share arrest data from local law enforcement agencies with federal immigration agents.

That leaves more than a dozen hold-outs. Last week Washington’s State Patrol declined to sign an agreement with Immigration and Custom’s Enforcement (ICE) to activate the controversial program.

“We are a state law-enforcement agency, and we don’t want to go down the road of being an immigration agency,” Patrol spokesman Bob Calkins told the Seattle Times.

But while they may not participate in Secure Communities, police in many of these states have actively sought to participate in immigration enforcement, and the results have often been troubling.

Smith recalled a March 2010 Enterprise Ledger article that highlighted how four immigrants had been transferred to ICE custody from Coffee County Jail in the last two days.

“If we suspect they are an illegal alien, we contact ICE and they transport them to Montgomery to verify and deport them from this country,” said Richard Moss, Coffee County Jail Administrator.

Some of the relationship between Alabama police and ICE stems from previous 287(g) agreements that deputized local police with the power to enforce immigration. The state police signed up in September 2003, second only to Florida, along with several counties. When those agreements expired, only the state’s was renewed by ICE in October 2009.

Many of these agreements have already yielded problems. In Rhode Island, the ACLU has asked the Justice Department to investigate whether police are providing proper translation services for immigrants they often transfer to ICE custody.

“Given the state police … interest of expanding their role in having contact with people with limited English proficiency, we thought it was worth examining how well they were complying with federal requirements dealing with services to [limited-English-speaking] individuals,” RI/ACLU Executive Director Steven Brown told the Providence Journal.

In New Jersey, a 2007 statewide directive requiring police to inquire about immigration status has led to concerns that people are being targeted for their race, not because they pose a threat to public safety. When researchers at Seton Hall University Law School’s Center for Social Justice surveyed 68 immigrants who had been transferred to ICE by local police, 49 said they had been arrested for minor traffic offenses, and 19 for other minor offenses.

“We really want to be ready and see if we can stop it from happening here,” said Amy Gottlieb, Immigrant Rights Director for the American Friends Service Committee’s New York metropolitan region.

She said the first step is informing the public about Secure Communities.

“The fundamental assumption that deportation is the answer or is required when somebody has a criminal conviction is something we need to question,” said Gottlieb. “Rather than make our community safer it tears apart families and weakens what are already fragile structures.”

This Friday the New Jersey ACLU is hosting a forum on “Relations Between Immigrants and Police.” The AFSC is hosting an all-day conference on Dec. 18 that will feature Sunita Patel, an attorney with the Center for Constitutional Rights who has sued ICE to release information about how to opt-out of Secure Communities.

Oral arguments on an emergency injunction to make these documents public is scheduled for this Thursday in the Southern District of New York.

New York is also in the middle of a push-back against Secure Communities. It is one of two states, along with Wyoming, that have signed up for the program but have no counties participating. Now immigrant rights advocates are asking Gov. David Paterson to rescind the agreement.

“We’re going to give him a chance to fix the situation,” said Chung-Wha Hong, Executive Director of the New York Immigrant Coalition, which includes more than 200 organizations statewide.

The group among dozens of co-sponsors for a “Say No to Secure Communities” rally also set to take place this Thursday in front of Paterson’s office in midtown Manhattan.

This article was originally posted on DeportationNation.org.