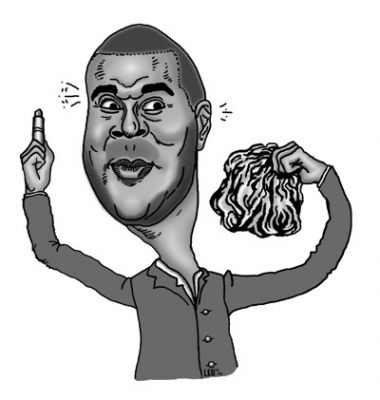 When I first heard about Tyler Perry’s plan to direct a film version of ntozake shange’s For Colored Girls Who Have Considered Suicide When the Rainbow Is Enuf, I considered committing homicide.

Allow me to explain. shange wrote these poems, infused them with dance and wove them into a cohesive performance of black American womanhood in the 1970s. It was, quite literally, poetry in motion — a self-described choreopoem. In it, she boldly declared a new liberation, free from shame and victimhood, healing the pain of black women by exposing it — giving it a voice through monologues dealing with poverty, abuse, sexuality and the fight for respect. And in this rainbow of self-affirmation, there was infinite room for the many shades of blackness and the varied hues of feminism.

As a black woman, I can say that my life was profoundly touched and, I daresay, shaped by the beautiful rainbow she painted.

And then along comes Tyler Perry. This is the man whose canon includes such blockbusters as Diary of a Mad Black Woman and Why Did I Get Married — whose most salient commentary on black womanhood thus far has been a man in a dress.

When I saw the billboard for the movie, I had a glimmer of hope. For Colored Girls has a beautiful cast. Well respected. Immensely talented. Thandie Newton (Beloved) could act out the phonebook. Anika Noni Rose’s (Dreamgirls) voice is captivatingly melodic. Phylicia Rashad (The Cosby Show) could bring grace to a catfight. But none of that was enuf.

After viewing the film, I do not believe that Perry was motivated by any benevolent desire to empower black women, as shange intended. He deviates from the original text at whim. He creates one new female character (the lady in White, played by Whoopie Goldberg), rearranges poems and, perhaps worst of all, introduces male characters.

About halfway in, I figured out his goal: humanize black men, no matter what the cost to their female counterparts. To do this, he introduces the usual lineup of black men, all made of such thin cardboard: the “good brother,” the “crazy nigga,” the “down-low brother,” the “low-down nigga.” To bring flesh to these cliché bones, Perry offers shange’s vision as a sacrifice.

Perhaps the most out of place was the fiercely closeted, self-hating bisexual husband, Frank (played by Omari Hardwick). But then again, I’m not sure if that title applies, since Perry goes out of his way to emphasize Frank’s struggle to assert himself in his marriage to the all-too-common cold, emasculating black bitch. The story of his wife, Jo, played by Janet Jackson, is rendered immaterial, so much so that when she contracts HIV (of course), the audience can’t help but think that some of the blame rests with her.

Indeed, blaming the victim proves to be Perry’s strategy of choice in his attempt to “reclaim” this story for black men. Throughout the over-performance of a mother’s story of domestic violence, Perry strips the mother of all her agency. He omits the part in shange’s original play where Crystal (played by Kimberly Elise) kicks out the father of her children, Beau Willie, and gets a restraining order. She exists only as his victim, but she loves him anyway.

By the time the father, played by Michael Ealy, finally murders the children by dropping them from the fifth-floor window, the blame has even spread beyond the mother. The social worker, Kelly, played by Kerry Washington, is complicit because she failed to rescue the kids in time; Gilda (Phylicia Rashad) the neighbor and babysitter, should not have allowed the kids to go back home.

After fighting tooth and nail to save her children and surviving a suicide attempt, this grief-stricken woman is told that she “has to take some responsibility.” If ever there was a moment in which Rashad should have got¬ten the taste slapped out of her mouth, it was when she delivered those lines.

It was heartbreakingly disempowering to hear shange’s poetry in male voices. It was especially bitter to hear the “good brother” police officer, played by Hill Harper, recounting the experience of rape as he takes his victim’s statement. He was also taking her voice. The whole spectacle of For Colored Girls felt like literary rape. I found myself waiting for Juanita, played by Loretta Devine (Waiting to Exhale), to speak. Not that her character was free from cliché, but because she seemed to have most of the poetry that was still mixed schizophrenically into the script. I had never noticed how rhythmic her voice was before. I could actually believe her when she exclaimed, “Somebody almost walked off wid alla my stuff….My stuff is the anonymous ripped-off treasure of the year! Did you know somebody almost got away wid me?”

Maybe that was because I was watching Tyler Perry walk off wid alla my stuff.