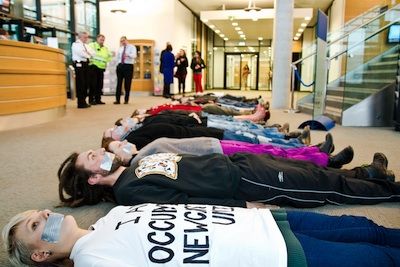 A wave of protest swept Britain during November, as students walked out of their schools and colleges and took to the streets to resist the government’s planned cuts to education.

Since taking office in May, the government has implemented a ‘public spending review’ calling for reductions in public spending across all departments in order to decrease the budget deficit of around 70 percent of GDP.

For higher education, the government has proposed a 40 percent budget cut as well as a trebling of course charges to £9,000 per year. Before 1998 higher education in the UK was free at the point of use and funded by general taxation. Because the cuts package favors business friendly courses as well as science, arts, humanities and social sciences could be devastated.

High school students from poorer backgrounds who have been used to receiving an ‘Educational Maintenance Allowance’ –a weekly grant to help them financially through their further education- are facing it being taken away.

A particular cause of anger amongst students has been the position of the Liberal Democrats, who entered a coalition government with the Conservative Party following the May election.

Prior to the election they had pledged to fight against any rise in tuition fees – the most student friendly position of the three main parties- and signed pledges to that effect when asked by the National Union of Students (NUS), but they are now backing the funding cuts and fee rise. Nick Clegg, Deputy Prime Minister and Liberal Democrat leader has insisted that the policy does not conflict with his aim; “to encourage people from poorer backgrounds to go to university”.

On Nov. 10, a national demonstration called by the NUS in London took an unexpected turn as demonstrators deviated from the planned route of the March and occupied the headquarters of the Conservative Party, damaging property and smashing windows.

Further protest followed with a national day of action on Nov. 24, during which heavy handed policing of the London demonstration led to young school children being contained for hours in temperatures close to zero.

Further direct action followed as several colleges went into occupation after a national day of action on Nov. 24, typically issuing demand that the university management release a statement against the funding cuts. As I write, over ten universities remain in occupation, including Cambridge, SOAS (London), University College London, Newcastle and Leeds.

Yet another day of action on Nov. 30 saw yet another wave of protests across in cities the UK. The sheer number of protests organized in such a short period of time gives an indication of the protestors’ determination.

So far, the grassroots student movement has been taking the initiative, with NUS President Aaron Porter having to apologize for his “spineless dithering.”

There is also a feeling that the students have become the vanguard for resistance to the governments’ austerity agenda as a whole, with trade unionists planning to join forces with the students.

Tony Woodley, general secretary of Unite, Britain’s biggest trade Union, commented that, “the anger and passion” reflected the feeling in the Trade Union movement, while Bob Crow, head of the RMT, a large transport workers’ union, added, “Our immediate challenge is to link up all the different groups at the sharp end of the government austerity measures.”

It remains to be seen what affect these student actions will have, but it could well be that their efficacy depends on their ability to link up with the wider anti-cuts movement. They are certainly a powerful reminder of people power, encapsulated by one of the slogans chanted by students on the march; “This is what democracy looks like!”

For more on the protests, visit: ncluniocc.blogspot.com.

For Indypendent coverage of recent CUNY student protests, check out: