In June of 1981, the Centers for Disease Control and Prevention (CDC) disclosed a baffling rare pneumonia in five gay men in Los Angeles—the first recorded cases of what would eventually become known as AIDS. Since then, 1.7 million Americans have become infected with HIV. More than 1 million Americans currently live with the virus, including some 500,000 black Americans, who have been infected disproportionately since the onset. African Americans continue to account for nearly half of all new infections today, despite representing just 13 percent of the population. (Scroll down for infographics with more data about the epidemic.)

The U.S. Centers for Disease Control and Prevention believes the most significant driver of those new infections is unprotected sex between people who do not know they are at risk. The agency estimates one in five HIV-positive Americans do not know they carry the virus; studies suggest that number is higher among black Americans and young gay and bisexual men. Studies also show that, once people know they are HIV positive, they are unlikely to transmit the virus to others. In other words, the epidemic is still being driven by what we don’t know.

We mark World AIDS Day by acknowledging that our nation is approaching AIDS’ 30th birthday, a dark commemoration that will induce many people to assess their unsentimental journey through the pandemic. Here, three black Americans reflect on their experiences with misunderstanding.

A Strong Painkiller of Silence

“In 1985 I was incarcerated in South Carolina Women’s Correctional Institution,” says Pat Kelly. Her offense—writing bad checks—cost her only a short time behind bars. Yet Kelly recalls almost four weeks of isolation in lockdown awaiting results of a compulsory blood analysis. Finally a doctor was standing before her. “He was wearing a mask, gloves and a gown,” Kelly recalls. “He just said I had AIDS and was going to die.”

The doctor then prescribed a strong painkiller: silence. He warned Kelly to tell nobody or else nobody would go near her.

Kelly was released about nine months later, knowing little about HIV/AIDS. “Only what I had seen on TV,” she says, including a report that people with AIDS would be dead within three years.

“Every time I got a cold,” Kelly says, “I thought it was time for me to go.” And thinking she was going to die, Kelly lived in the fast lane: “I was just like, if I’m going out, I’m going out with a bang.”

Kelly’s one early attempt at counseling included only one companion, another woman, whose tales of social stigma and the adverse effects of treatment terrified her. “She told me about how her hair fell out,” Kelly recalls. “Just hearing her horror stories, I was like, oh no! I ain’t never taking that medicine.” And so, resigned to dying, Kelly waited for AIDS to summon her.

Today Kelly has prevailed over her doctor’s grim prognosis and her worst fears of 25 years ago. “It took me nine years before I joined a support group,” admits Kelly, who says that she came around to taking medication in 1998. She now directs Life After the Sign, an HIV/AIDS support group in Orangeburg, S.C., where her survival and hard-won expertise enable her to counsel women who are going through what she did.

While Kelly needed time to rally, others fought back almost immediately. 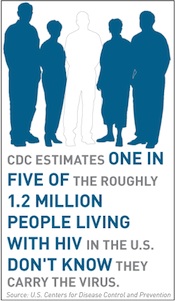 “I don’t know if you remember that the CDC had identified people at risk as the ‘four Hs,’ ” says Jean Claude Compas, a Haitian family-practice physician in Brooklyn, N.Y. “It stood for Haitians, hemophiliacs, homosexuals and heroin addicts.”

“Scientifically, it didn’t make any sense,” Compas says of the ban. Despite New York City health officials lifting Haitians from its own 4H high-risk group in 1983, federal agencies continued to bar them from blood drives for eight more years.

On April 20, 1990, when the U.S. ban was up for review, about 70,000 Haitian New Yorkers marched across the Brooklyn Bridge into lower Manhattan to protest what Compas calls the “terrible stigma” that was demonizing Haitian blood.

“The protest was very important for us,” says Compas, who was a key organizer of the march. Today, he finds, “the stigma of AIDS is less, but still there,” so the task of educating his community about prevention and treatment remains urgent.

Of course, one of the 4Hs was homosexuals. While a teenager in Topeka, Kan., Tod Roulette struggled with his budding sexuality and, like most youths, tried to express himself in other ways.

Roulette had his heart set on going to a journalism camp, “but my mother was married to a fundamentalist Pentecostal preacher, who thought it wouldn’t serve any purpose,” he recalls.

When Roulette’s parents refused to let him go, another Pentecostal preacher—seemingly more open-minded and accepting than Roulette’s parents—admonished them not to stand in the way of the boy’s future. “This pastor really took it upon himself,” Roulette remembers. At last, he thought, he had found someone he could confide in about his sexuality.

During a car ride with the pastor, Roulette was just about to share his secret that he was gay when the preacher reached over and tuned in to National Public Radio. “This was 1984,” Roulette says, “and NPR had on a segment about ‘gay cancer,’ ” as AIDS was sometimes referred to back then. Suddenly his seemingly liberal benefactor blurted out, “All those homosexuals are going to die and go to hell.”

Roulette rode out the rest of the trip in silence.

He felt as if the preacher’s blanket curse was still hanging over him when he was diagnosed as HIV positive eight years later, in 1992. So he worked on breaking its spell by writing publicly about his status.

Today Roulette concedes that the devastating impact of the 30-year AIDS crisis on the black community has cooled the burning coals that many fundamentalist preachers used to hurl from the pulpit. But he still believes that their anti-gay ire is misdirected.

When churches spend their energies and resources opposing issues like same-sex marriage and gay adoption, they miss the opportunity to rally together to help people, says Roulette, who today is a churchgoing (now Episcopal) adoptive parent living in Harlem, N.Y.

Despite the pandemic’s bleak history, even its unresolved future is brighter. “Now I’m 43, but I didn’t think I’d live past 35,” says Roulette, who became an art dealer. “Hopefully we’re not going to have a 60-year anniversary of AIDS.” 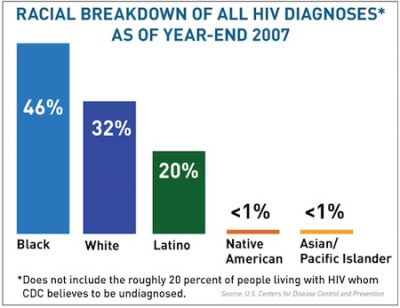