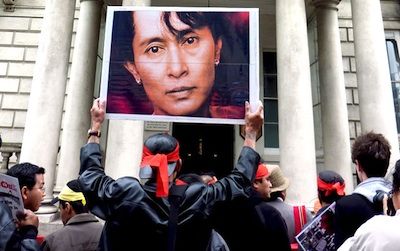 A few weeks ago, Burma’s most eminent pro-Democracy advocate emerged from captivity after spending most of the last 21 years under house arrest. In December, a Chinese activist will miss his Nobel Peace Prize award ceremony to serve out the rest of his 11-year prison sentence. In freedom and captivity, Liu Xiaobo and Daw Aung San Suu Kyi are being honored around the world as indefatigable dissidents. The core of their resistance, however, draws from broader social movements, as well as our collective response to their symbolism.

In reality, Suu Kyi is just one of more than 2,000 imprisoned dissidents in Burma, according to Amnesty International, “most of them for exercising their right to freedom of expression, assembly and association.” Human Rights Watch reports that recently jailed dissidents, from bloggers to monks, have been “mainly charged under provisions from Burma’s archaic Penal Code that criminalizes free expression, peaceful demonstrations, and forming organizations.” The Economist has compiled a table of prisoners of conscience living under house arrest. In sum, there are many more political prisoners in Burma than there are media campaigns to rescue them.

(Suu Kyi herself was guarded in her remarks upon release from house arrest, calling on her followers to remain within the “rule of law”—one indicator that, in the wake of sham elections, her freedom is precarious.)

This is not to diminish the triumph of the Nelson Mandelas and Liu Xiaobos of the world, of which there are too few examples. The high-profile prisoners understand better than anyone that their narrative is not singular but plural, and use their leadership to serve a broader movement. As Suu Kyi reminded her followers, “Either we’re all free together or we are all not free together.”

So here are a couple of reasons, out of thousands of examples, to feel less free today:

Journalists Annakurban Amanklychev and Sapardurdy Khadzhiev have been held incommunicado in Turkmenistan since mid-2006. According to the advocacy campaign Freedom Now, the authorities have accused them of “trying to collect defamatory information about Turkmenistan and cause discontent among people,” and illegal weapons possession. A trial lasting roughly 10 minutes put them behind bars for seven years.

In Peru, Dr. Luis Williams Pollo Rivera was jailed for allegedly rendering medical services to members of the Shining Path, a Marxist reel movement that has waged insurgency campaigns over the past three decades. At the trial, according to Freedom Now:

The only evidence presented was statements by Shining Path members, obtained under interrogation, that Dr. Pollo provided them with medical treatment between 1989-1991. Dr. Pollo strenuously denied these claims and several witnesses backed his version of events.

Of course, that defense is beside the point:

The act of providing medical treatment does not violate Peruvian or international law. On the contrary, doctors have an obligation to help the injured, regardless of their patients’ political affiliation, beliefs, or actions.

But such paradoxes are common in the ethical universe political prisoners inhabit: people who are criminalized for their beliefs quickly learn they can’t act on their ethics without consciously breaking the law.

Prisoners of conscience aren’t incompatible with democratic government, either. Equipped with the world’s largest prison system, the U.S. holds its share of folks who are considered political prisoners. Many are elders of 60s and 70s radical movements like American Indian activist Leonard Peltier, leftist journalist Mumia Abu-Jamal, and a handful of Puerto Rican Independistas.

In a report submitted to the United Nations Human Rights Council, the U.S. Human Rights Network argues that “[political prisoners/prisoners of war] receive excessive sentences and are routinely denied parole,” despite plain evidence of “advancing age, deteriorating health, significant release plans and good prison records of these aging PP/POWs.” These aging revolutionaries probably won’t take up arms again anytime soon, but at this point, the government’s fear is not insurrection, but the political currency of release: to free them would be to suggest their incarceration was never legitimate in the first place.

Moreover, the line between political prisoners and ordinary ones is blurring, as politics and criminalization collude in the post-9/11 counter-terrorist hysteria. Activists warn of a resurgence in the use of surveillance, informants, racial profiling and arbitrary detention that is reminiscent of the J. Edgar Hoover days. Human rights researcher Matt Easton recently wrote on how a culture of surveillance and fear enables authorities to harass, suppress, and even kill human rights defenders, whose activism earns them labels like “guerrillas, communists, or terrorists.”

As a recent “Democracy Now!” investigation revealed, the use of informants and legal entrapment in counterterrorism gives the FBI perverse incentives to manipulate evidence to score an easy conviction and boost their terror-fighting credentials. In a more overtly political crackdown, recent FBI raids reported by antiwar and pro-Palestinian activists appear to be aimed at unearthing links to foreign political groups. In the absence of a Burma-like autocracy, the U.S. manages to justify suppression of dissent as a boon for freedom.

Media images of political dissidents appear to us as distant characters in a political drama: morally unassailable, romanticized victims. But the circumstances that produce political prisoners are rarely a clear-cut good-vs.-evil battle; and the politics of imprisonment aren’t necessarily about ideology or a few iconic leaders. Prison as an instrument of social control exploits the mental crawl space between fear and obedience, corroding the divide between freedom and captivity itself. Sometimes it’s not the imprisoned who most need emancipation; even on the outside we’re less free than we think.