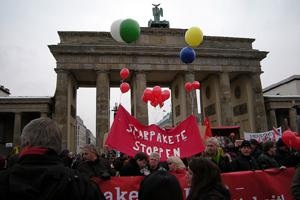 Protests against the gloom of budget austerity in Europe have gripped the continent for months. Hundreds of thousands in Greece and millions in France have marched, struck, and blocked roads. Last week, tens of thousands of Portugese and Irish unionists turned out to voice opposition to big cuts planned for public workers and wages. Thousands of British students have left class to protest giant fee hikes.

But in Germany, the heart of the push for austerity in Europe, the response from unions and others has been muted. Why?

German activists tried to catch the wave of European unrest last week. Thousands gathered on Friday outside the German parliament, which 300 activists briefly blocked while parliament members inside discussed a national budget proposal that includes a heavy package of cuts, including raising the public pension age and forcing workers to pay more into the national health system.

Responding to a “terror warning,” thousands of police massed outside the parliament and pulled activists out of the street after less than an hour.

A coalition government under the sway of conservatives had spent billions bailing out banks last year, but Chancelor Angela Merkel announced in June that cuts to public budgets would continue until 2014.

“First the Merkel government rescued banks and stock owners, now they will make the poorest sections of the population pay for these gifts,” says Michael Prütz, a member of the Berlin-based alliance “We Do Not Pay for Your Crisis,” which organized Friday’s protest.

“Conservatives and center-right legislators have set in motion a huge redistribution from the bottom up to the top,“ Prütz said, noting that $26 billion could be taken from the unemployed in one way or another.

The Friday events looked like a defeat compared with the mass strikes in Greece, Portugal, and France. Union leaders failed to launch a campaign to mobilize members.

The chairman of the national union federation DGB, Michael Sommer, had announced that politicians would face a “Hot Fall” after the government presented its proposal last summer.

“But almost nothing happened,” Prütz said. “It was a disaster.”

Although on paper the German unions are very critical of the government’s “reform agenda,” only a tiny minority of official union sections or institutions supported the attempt to blockade parliament.

DGB chose a different way. In October and November its unions organized informational rallies inside plants and demonstrations in several cities over the proposed cuts. Even without serious mobilization efforts, more than 100,000 came out in support.

For Jakob Schäfer, who belongs to a cross-union group linking activists, these numbers were far from a success. In 2004, unions put 500,000 people in the streets against cuts to unemployment benefits and a bid to ease hiring of temporary workers. (Still, some of these measures passed.)

Helmut Born, a workers council chairman in retail, said one problem this time was creating a feeling among members that “we really wanted to stop them, and we could.”

“Often I couldn’t explain to co-workers how a few demonstrations on weekends could change anything,” Schäfer said.

Why is a direct confrontation with the government over the cutbacks not on union leaders’ agenda?

Prütz says it’s partly because the core of the German working class does not yet feel affected by the crisis. The unemployment rate is even declining, though the new jobs are mostly temporary, low-wage, or short-time.

Mighty unions like the German Metal Workers (IG Metall) have not had to face mass layoffs. Hence a more cooperative strategy with government and employers.

But that is only one side of the story. Prütz argues that upcoming federal elections in 2013 are coloring unions’ reactions, too, making them less demanding. Union leaders are placing their hopes in the Social Democrats and Greens, who they think could bring improved policies if they win the next ballot.

Seasoned observers of German politics say this is wishful thinking. The deepest cuts in the social safety net were carried out by Social Democrats and Greens between 2002 and 2005.

Bernd Riexinger thinks there is still light. He’s chairman of the Service Employees Union in the city of Stuttgart and a leader of the “We Don’t Pay for Your Crisis” alliance.

He thinks the unions cut the action off before it had a chance to grow. The unions in Stuttgart, for example, organized actions at 60 plants, but the momentum fizzled, with no common message that resonated and no hints of willingness to test the powerful.

Organizing across unions, regions, and social-movement groups is a hopeful sign, he said. Tens of thousands of people—especially youth—poured into the streets in October and November to protest nuclear energy.

Riexinger points to the the cross-union network’s plan to fight to alter the balance of forces within the unions as another beacon.

“What we now would have to do is transform strong support for our positions into a real movement for political change, ” Riexinger said. “In order to do so we would need an alliance with social movements and the guts for civil disobedience.”

Thomas Goes is a PhD Student in Industrial Relations at the University of Jena in Germany. He is also an active member of the Service Employee Union (Ver.di). He has been interning with Labor Notes in New York.