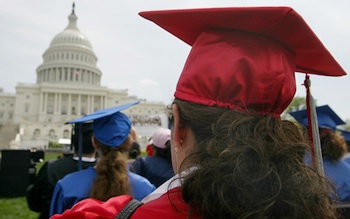 UPDATE 4:42pm ET: Roll Call’s Jennifer Bendery reported via Twitter that Senate Majority Leader Harry Reid announced he plans to file for cloture on the DREAM Act by end of day Tuesday. If Reid does file by today, Thursday would be the earliest day the bill could come up for a vote.

The White House is taking a high-profile, public role in the effort to pass the DREAM Act in the remaining days of the lame-duck Congress, before the more conservative incoming legislators arrive and greatly reduce the bill’s chances without another electoral shift.

Yesterday, the White House hosted a Web chat on the DREAM Act with Cecilia Munoz, the director of Intergovernmental Affairs, in which Munoz took public questions for half an hour on the bill. The DREAM Act would allow undocumented youth who’ve lived in the country for more than five years with a clean criminal record to qualify for permanent residency if they commit two years to the military or higher education, thereby creating a path to citizenship.

“It’s kind of an all hands on deck moment here in the administration, involving multiple agencies,” Munoz said. “The president himself is engaged.”

“We’re going to do everything we can to lay the groundwork and create the space for people who know this population of students to do what they know is the right thing to do.”

The flurry of White House activity continues this week with more public events in which Secretary of Labor Hilda Solis and Munoz will discuss the bill. Many congressional watchers see the next four weeks as a crucial time for the DREAM Act, before a Republican majority moves into the House and Republicans take up a half dozen seats in the Senate. In the decade that advocates have spent trying to pass the DREAM Act, it’s enjoyed a long list of supporters from both parties. But many balk today at signing onto the bill in the current anti-immigrant climate.

“It’s not just DREAM Act students who are victimized by inaction,” Munoz said during yesterday’s Web chat. “As a country when we don’t act, we end up falling further behind because we deprive ourselves of the talents of these extraordinary people.”

Will the White House support be enough to sway those who are still sitting on the fence? It’s hard to tell. For the entirety of President Obama’s tenure, skittish Democrats and obstinate Republicans have been disinclined to support anything but the most punitive immigration bills that concentrate only on enforcement. Members of Congress still undecided on the DREAM Act are likely weighing how much the support of the immigrant community will mean to their political futures—or gambling on anti-immigrant fear mongering to buoy their campaigns in 2012.

If the White House support means little, Congress may be swayed by the op-ed pages of the Economist and the Wall Street Journal, which have both come out in support in support of the bill in recent days.

Or they may be taking notice of the DREAM Act activists, who are rolling up their sleeves for another round of public actions and civil disobedience. Fifteen activists were arrested in San Antonio, Texas, yesterday while trying to pressure Sen. Kay Bailey Hutchison, who once supported the bill. Dozens of Texas undocumented youth and their allies are going on their third straight week of a hunger strike to get Hutchison’s attention. She has said, though, she will vote against the bill when it comes up for a vote.

This article was originally published on ColorLines on Nov. 29.