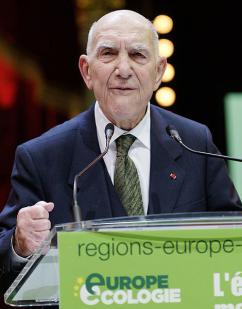 Perhaps it shouldn’t have come as such a surprise. After the social and political turmoil that rocked France in September and October of last year, the political and media pundits shouldn’t have been unprepared for the runaway success of the bestseller Indignez-vous! (Get Angry!), a political tract written by a 93-year-old activist and former member of the French Resistance against the German occupation of the Second World War.

Not only has Stephane Hessel’s 30-page pamphlet taken over the number-one spot on the French bestseller list–nearly 600,000 copies have been sold since its release on October 20–it has also captured the imagination of the entire country and sparked a public debate over the extent and meaning of the “affaire Hessel.”

For anyone who followed the street protests and strikes that threatened to shut down the French economy last fall, however, the causes of the success of Hessel’s book should be fairly self-evident. As in a growing number of countries in Europe, the austerity measures forced through by the government created a groundswell of popular revolt, and the strikes called by French unions in protest against an increase in the retirement age were supported by over 70 percent of the population.

Though the social movement lost the political battle–the law raising the retirement age was passed, despite protests that drew millions into the streets for several days of action–the indignation remains a bitter memory for much of the French population.

From the press coverage of the book, however, it appears that political establishment and the media elites were expecting the anger over French President Nicolas Sarkozy’s unpopular measures to have died down before the end of the year. By Christmas–or so the received wisdom among the elites went–the French people would have moved on to other things.

Yet as one bookstore employee told the French newspaper Le Monde, “In 40 years as a bookseller, I’ve never seen such a phenomenon. It’s crazy. On December 24, some customers bought five or six copies to give them as gifts. I thought things were going to calm down after Christmas, but no–we’re still selling over 400 per day!”

Hessel’s pamphlet appears to have touched on a dissatisfaction that runs even deeper than the battles over the retirement age or pension benefits. His call for a “peaceful insurrection” may owe its success to more than the public’s exasperation at Sarkozy and his disregard for the huge social movement of last fall. The anger to which Hessel’s book gives voice is aimed at a number of systemic problems in contemporary French society, as Hessel explains:

The incredible success of Hessel’s book shows that much of France shares his anger at a whole host of social and political issues: the continued assaults on social welfare programs in the name of free markets and bank bailouts; the scapegoating of religious and ethnic minorities by right-wing groups, the extension of private control of public media and social services, the Israeli occupation in Palestine, and so on.

In its last issue of 2010, Le Monde invited a number of intellectuals, politicians, scientists and writers to follow Hessel’s example and weigh in on what made them angry in the world.

The bulk of the grievances expressed by these people were against economic and political injustices in France that required collective action: injustices against women, the threats of expulsion of foreigners, the destruction of natural resources, the mental and physical sufferings of workers, the lies told by the banking and financial elites, the lack of a strong collective movement to fight against the extremes of the financial system.

Rather than the narcissism and self-interest that has characterized much of the discourse around the Tea Party in the U.S, Hessel’s book points its readers to the collective nature that the solution to these problems must take. And his readers appear to share his desire for common struggle to build alternatives to the political and economic system.

As a call to arms, however, Indignez-vous falls somewhat short. Beyond a gesture towards the necessity of “working in a network,” and “taking advantage of modern methods of communication,” Hessel offers little in terms of concrete analysis or a political program.Much like the call last month by former soccer star Eric Cantona for the citizens of France to bring down the banking system by withdrawing their savings, the success of Indignez-vous shows that the spark for rebellion is still very much alive in France, but that political outlets for channeling the political force are not yet in place.

The broad appeal of Hessel’s criticism is therefore also its greatest limitation. He argues in simple terms for the necessity of a “radical rupture” with the current ideology of increased production and consumption, but does little to point out organizational solutions that might challenge the elites.

In an interview with the French newspaper L’Humanité, for example, Hessel rejected the electoral system that he sees as part of the problem: “We can no longer rely on the existing powers. Citizens must mobilize around non-governmental organizations that take on more and more international forms.” He sees grassroots organizations such as the World Social Forum or a return to the original spirit of the UN’s Universal Declaration of Human Rights as offering the only hope for real change.

Yet the greatest value of Hessel’s tract might not be in the depth of his prognosis of current events, nor even his ability to arouse anger in a larger number of French citizens, but as a rallying point showing people that the fight will continue to reverberate throughout 2011.

Because of the relatively cheap price of the pamphlet–three euros–and its place next to the counter of nearly every bookstore in France just before the Christmas season, copies of Indignez-vous can be seen not only on desks and nightstands, but also on street corners, and in busses and subway stations throughout the country.

Hessel’s cri de coeur has shown a good many people that they are not alone in their sentiments. Indignez-vous may be for France what the occupation of the Tory headquarters by student protesters in November was for England: A popular expression of revolt against a political system that has ceased to function for the majority of the population.

It remains to be seen whether this energy and anger can be further harnessed and shaped into real political alternative to the major French political parties. The battle lines between the right and the left will become more pronounced in 2011, the year before the presidential elections in 2012.

What is clear from Hessel’s book is that the French–like the Irish, the Portuguese, the Greeks, the Italians and the English–are very angry. The real question that must be posed now is: “Et après?”