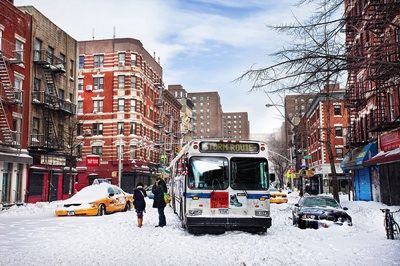 “Welcome to the New Normal.”

Those words should be displayed at New York’s airports as a welcome to bedraggled travelers during the Northeast’s latest “snowpocalypse.” Why? Because the Big Apple’s much-lamented paralysis this week is a critical cautionary tale for everyone. The episode warns us about the kind of thing that’s likely coming to the rest of America as we now willfully mix three toxic problems.

The first of those is global climate change. Though no single mega-storm is the fault of climate change, scientists agree that weather—including snow patterns—will become more intense as the planet’s ecosystem is transformed by human-produced pollution. So while New York’s near-record snowstorm may not be the direct result of unbridled carbon emissions, powerful storms like it will undoubtedly be more frequent thanks to our head-in-the-sand attitude toward the environment.

This might be slightly less alarming if our country were making investments to mitigate climate change’s worst effects. But that gets to the second problem that the New York snowstorm epitomizes: America is still being eviscerated by conservatives’ anti-tax, budget-cutting religion—a religion whose high priest is New York Mayor Michael Bloomberg.

Like so many wealth-worshiping politicians across the land, Bloomberg spent the last few years focused on two priorities: He campaigned against proposals to replenish depleted public coffers via slightly higher taxes on Wall Streeters, all while citing those depleted coffers as a rationale for massive municipal layoffs. Those job cuts, which were particularly acute at New York’s snow-removing sanitation department, have now predictably translated into an immobilized metropolis.

Bloomberg and other politicians who champion this pervasive tax-cut/budget-cut ideology will certainly employ rhetorical spin to distract from this cause-and-effect story. But with New York still resembling the ice planet Hoth, it’s clear Mother Nature can’t be spun, and even more clear that conservative economic ideology will probably deliver similar results all over America during future weather-related catastrophes.

But, then, how can such a bankrupt ideology persist in the face of such terrible consequences? Welcome to the third problem highlighted by the New York snowstorm: plutocracy.

We all know that American politics is dominated by money. The U.S. Senate is a millionaires’ club, and the politicians who aren’t personally rich are typically bankrolled by corporate interests. Billionaire Mayor Bloomberg personifies this plutocratic order—and his declaration that “the city is going fine” during the blizzard because “Broadway shows were full” demonstrates what plutocracy means in practice. It means that when an emergency does not hurt the Blooombergs of the world, our government does not see any emergency at all.

Yes, as long as the Bloombergs’ streets are plowed (as the mayor’s was), as long as the all-important rich are enjoying their theater engagements, the plutocrats think everything is A-OK. They don’t care that, say, an outer-borough newborn died because EMTs couldn’t get to the baby’s home for nine hours. They don’t care that another outer-borough woman had to wait 30 hours for an ambulance after breaking her ankle. And those plutocrats certainly aren’t about to change the conservative economic policies that help make these crises so horrific for the non-rich.

Again, this triple threat of climate change, economic conservatism and plutocracy is not limited to New York. It’s the new ubiquitous normal in America, which is why the Big Apple’s blizzard experience is so significant.

A real-time counter to demagogues’ more sensational predictions of our doomsday, New York’s winter trouble presents the nation’s gloomy future in more banal — but equally troubling — terms. The blizzard suggests that America’s decline will not look like an Armageddon-ish explosion in Washington. It will look like a traffic-snarling snowdrift in Queens.