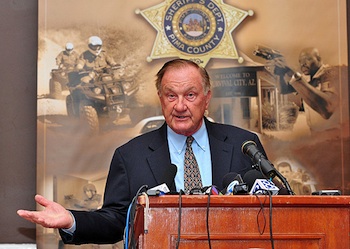 The Tucson massacre that left six dead and 14 injured, including Rep. Gabrielle Giffords, brought into sharp public focus the local sheriff, Clarence Dupnik. He’s been the sheriff of Pima County, which includes Tucson, Arizona’s second-largest city, for 30 years. For the 20 years before that, he was a police officer. Dupnik has gained attention this week for linking the shooting to the vitriolic political climate in the U.S., and in particular, Arizona.

Speaking at a press conference shortly after the shooting, Sheriff Dupnik said: “The anger, the hatred, the bigotry that goes on in this country is getting to be outrageous. And unfortunately, Arizona, I think, has become the capital. We have become the mecca for prejudice and bigotry.”

Arizona is one of three states in the country that allow people to carry concealed weapons without a permit. When asked about the law, the sheriff was emphatic: “We are the Tombstone of the United States of America…. I have never been a proponent of letting everybody in this state carry weapons under any circumstances that they want. And that’s almost where we are.” He also decried a proposed Arizona bill that would allow students and professors to carry guns on campus.

The suspected shooter, 22-year-old Jared Loughner, by most accounts suffers from some form of mental illness. Yet he was able to buy a semi-automatic pistol, along with extended-capacity magazines to hold more bullets. He bought the bullets the same morning as the attack.

When I interviewed Dupnik, he called Arizona’s gun laws “insane,” and reaffirmed the link he made between political rhetoric and the shooting: “I think that there are a lot of people in the radio industry, especially, and some in the TV industry, who make millions of dollars off of inflaming the public, purveying hate against the government, and distrust. In my judgment, people who are mentally unstable are very susceptible to the kind of rhetoric that’s going on in our country.”

One of those whose rhetoric has attracted attention is Sarah Palin. She published a map of the United States on her political action committee’s website that listed 20 congressional seats held by Democrats whom she was “targeting” in the 2010 elections, including Gabrielle Giffords. The map marked each district with the cross hairs of a gun. More controversially, she linked to the cross hairs map through a tweet that read, “Don’t Retreat, Instead-RELOAD!”

Giffords spoke directly to Palin’s use of the cross hairs when they first appeared, noting that “When people do that … there are consequences to that action.” Giffords’ opponent in the midterm elections, the tea-party-backed Iraq veteran Jesse Kelly, held an event advertised with the words: “Get on Target for Victory in November. Help remove Gabrielle Giffords from office. Shoot a fully automatic M16 with Jesse Kelly.”

As Giffords’ father rushed to her hospital bedside, he was asked if she had any enemies. “Yeah,” he said, “The whole tea party.”

As direct and offensive as Palin’s campaign was, it was a small part of the political vitriol that has consumed Arizona in recent years. Republican Gov. Jan Brewer gained national notoriety when she signed into law the controversial immigration bill SB 1070, which Dupnik fiercely opposed: “Every Hispanic in this country, especially in Arizona, must have awakened the next day to feel like they’ve been kicked in the teeth, like they are now second-class citizens, they have a target on their back, because when they leave the house, they’re going to have to take papers with them and prepare to be stopped and questioned.”

Contrast Dupnik with the sheriff of nearby Maricopa County, Joe Arpaio. He is notorious for the harsh conditions in which he jails people, using canvas tents in the searing summer heat. He has pledged to expand his tent city to accommodate the expected influx of detained immigrants. He is the subject of a U.S. Justice Department federal civil-rights lawsuit focusing on his treatment of prisoners and immigrants, and on abuse of power.

The Arizona Republic reports that Jared Loughner, charged in federal court for the murders and attacks, normally would have been remanded to the Maricopa County Jail, but “given the high profile of the case and Maricopa County Sheriff Joe Arpaio’s penchant for publicity, they moved Loughner instead to [a] federal facility.”

As the country unites against the terror in Tucson, let’s take the targets off the backs of all innocent civilians, and hope the humanity of Sheriff Dupnik prevails over the cruel vitriol of Arpaio and his ilk.

Amy Goodman is the host of “Democracy Now!,” a daily international TV/radio news hour airing on 800 stations in North America. She was awarded the 2008 Right Livelihood Award, dubbed the “Alternative Nobel” prize, and received the award in the Swedish Parliament in December.