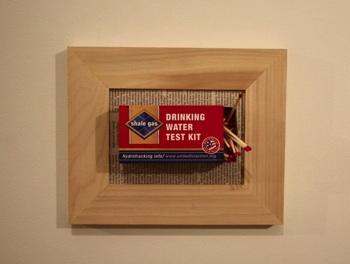 “FRACKING: Art and Activism Against the Drill”
Exit Art
Through Feb. 5

Alice Zinnes’ What We Will Be When We Are Not doesn’t really look like a political painting. Inspired by the landscape surrounding Zinnes’ studio in rural Northeastern Pennsylvania, it’s an abstract, brooding piece featuring a dark, muted palette. Zinnes’ painting captures the impact of one of the most serious environmental threats facing the Northeast— hydraulic fracturing.

This drilling practice, which involves breaking apart subterranean rock by pumping chemical-laced water into the earth to extract natural gas, is the subject of “Fracking: Art and Activism Against the Drill”— a small, dense exhibition in Exit Art’s basement gallery. The show is a project of SEA (Social Environmental Aesthetics), a unique effort that assembles artists, activists and scholars to address social and environmental concerns.

Intended to illustrate the grave environmental ramifications of fracking (which include polluted water, increased cancer rates and dead wildlife), this is an appreciably modest, homespun show. There are posters with statistics, bare-bones documentary videos, political cartoons and other pointedly polemicized pieces; but the marrow of the exhibit is in the little things — the small, friendly works of art, mainly by artists who seem to have found a communality with nature and take threats to the environment personally. Zinnes’ painting is one example; there’s also Rifka Miller’s chunky blue-green river painting and Paul Lloyd Sargent’s upstate New York snapshots. Robin Jane Solvang presents a tiny color photo of a fire alarm with an associated artist’s statement on the dangers of fracking — the statement takes up more wall space than the photo. There are simple digital collages and poems tacked to the wall. There are also postcards contributed by the public, featuring original artwork on one side, and a written statement about fracking on the other. Perhaps the most ostentatious yet understated work is Linda DiGusta’s small drawing of a fish, with the line “Fracking kills fish and it will kill us, too,” written on the artist’s statement next to the piece.

In the end, it’s hard to sum up the impact of this exhibit. It doesn’t feel like a beacon or like a catalog of activist approaches, and it’s not quite a battle cry, either. It’s more like an honest, insistent voice of concern. While fracking poses a serious threat to the entire planet, the consequences can be as real — and as small — as your own backyard.