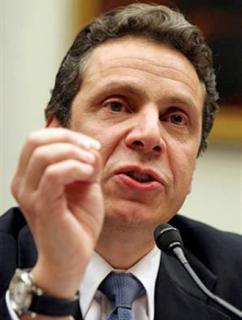 Attacks on teachers and a new round of school closures are two fronts in a broad attack on the public sector, orchestrated at the state level by newly elected Gov. Andrew Cuomo and in New York City by Mayor Michael Bloomberg, who has announced 26 more school closures, primarily in Black and Latino neighborhoods.

Cuomo has come to office as the austerity governor, calling for drastic budget cuts across the board, a freeze on new taxes and demonizing the state’s public-sector unions as “holding hostage” the corrupt state government in Albany.

“We’ve seen the same play run for 10 years,” Cuomo told the New York Times. “The governor announces the budget, unions come together, put $10 million in a bank account, run television ads against the governor. The governor’s popularity drops; the governor’s knees weaken; the governor falls to one knee, collapses, makes a deal.”

Left unmentioned by the governor is the $10 million dollars raised for his campaign by the Committee to Save New York, a self-appointed board of financial elites, real-estate powerhouses and business leaders.

This committee is modeled on the Municipal Assistance Corporation (MAC) that was assembled to address New York City’s fiscal crisis of the 1970s. The MAC was a board of prominent business elites who orchestrated the rescue of the state’s finances through attacks on the city’s most progressive institutions, including its powerful unions, free public university system, welfare system and Medicaid programs.

Coupled with these budget cuts were attacks on the pensions of the state’s powerful public-sector unions. Municipal unions like District Council 37 (DC 37) and the United Federation of Teachers (UFT) allowed their pension funds to be used to buy city bonds in order to bail out the city.

The fiscal crisis of the 1970s is frequently cited as a template for the current austerity regime. Cuomo recently mailed copies of The Man Who Saved New York, a book about former New York Gov. Hugh Carey, to union leaders in the state. Carey oversaw the pension raid during the fiscal crisis. Today, reductions in pensions, as well as layoffs and an extended workday, are all possibilities lifted directly from the playbook of the 1970s.

While the governor has been calling for open confrontation with the public-sector unions, the New York City Department of Education has identified 26 schools to be closed, some to be replaced by privately run charter schools. In many cases, the schools to be closed are located in low-income Black and Latino neighborhoods and would involve the displacement of thousands of students.

Attempts at massive school closures have a recent history. Last February, former Chancellor Joel Klein and the Panel for Educational Policy (PEP), a fake school board stacked with business people and controlled by Bloomberg, held a hearing to close 19 schools in predominantly Black and Latino neighborhoods.

After hours of testimony and raucous protest against the closures, the PEP voted the proposal through. The closures were halted by a lawsuit by the UFT and NAACP on procedural grounds. However, many of these same schools are on the chopping block again this year, exposing the limits of the union’s strategy of relying on the courts alone to defend public education.

While the UFT continues its losing strategy of fighting closures in the courts, activist groups like the Grassroots Education Movement (GEM) have taken the fight against school closures to the streets–from Harlem to Brooklyn.

GEM has organized a number of visible demonstrations against charter school co-locations and school closures as well as a demonstration outside of the teacher-bashing film Waiting for “Superman”. These actions have attracted media coverage and won GEM a reputation as a stalwart defender of public education.

The Ad Hoc Committee to Stop School Closings and Charter Takeovers is another formation that has been mobilizing. The committee has issued a call for a demonstration against school closures on January 27 as well as a call for demonstrations at PEP meetings in the coming months. Several disparate forces united to form the Ad Hoc Committee, which hopes to forge a more cohesive resistance from the traditionally fractured left wing of the movement to defend public education in New York.

The memories of last year’s battles are recent, and the higher level of organization on the part of teachers and students means that this round will not end without a fight.

One example of this is the struggle over the co-location of an elite “Millennium” school in John Jay High School in Brooklyn. Students and teachers argue that Millennium will displace the mostly Black and Latino student body in order to create a first-tier school for mostly white and Asian students. Fifty students and teachers demonstrated outside the building on January 11 to demand integrated schools, equal funding and the removal of metal detectors that stigmatize students of color as criminals.

“We’ve been set up to fail from the very beginning,” said John Yanno, a UFT chapter leader at John Jay. “They’ve created a virtual police state inside the school, where no Park Slope parent would send their children. Instead of a ‘separate-but-equal school,’ give us resources that will make our school one that all students, whether from Red Hook or Park Slope, would be proud to call their own.”

The PEP will vote on school closures at four meetings in the next six weeks. These events will be an early test for Cathie Black, who has replaced Klein as chancellor. While the attacks on public schools are severe, they also provide activists with an opportunity to build a stronger coalition against the attacks on public education.

The fight around school closures and the call to “integrate, not segregate” are just two examples of how it’s possible to build bridges between parents and teachers, a historic weakness in New York. Given the scale and pace of the attacks, a strong community alliance that can overcome historic divisions is necessary to defend the right to a quality education for all students.