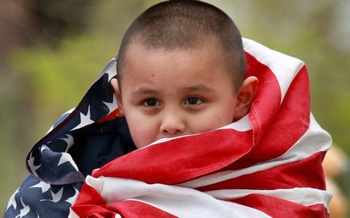 “Those two companion bills have one purpose,” Kavanagh told Colorlines. “We want to trigger a Supreme Court review of the phrase ‘subject to jurisdiction thereof’ which is contained in the 14th Amendment.”

Kavanagh said he believed that statements from the 14th Amendment’s authors and initial Supreme Court decisions reveal that the amendment was never intended to grant citizenship to the children of undocumented immigrants.

“We believe the current interpretation is wrong,” he said.

One of the House bills seeks to amend the state constitution to create a new category of Arizona state citizenship. Kavanagh’s bill says that in order to be granted state citizenship, a child born in the U.S. would need to have at least one parent who is a legal permanent resident or a U.S. citizen. The bill’s language is tricky. It interprets the 14th amendment to mean that only the children of “at least one parent who owes no allegiance to any foreign sovereignty, or a child without citizenship or nationality in any foreign country” are eligible for state citizenship.

Immigration rights advocates and legal scholars who oppose the bill insist that this is unconstitutional.

“These bills seem to try to manufacture a novel definition of state citizenship which really contravenes the understanding and well-established principle of citizenship that the 14th amendment brought and codified almost 150 years ago,” Vivek Malhotra, an attorney with the American Civil Liberties Union, said on a press call last week, before the bills were delivered.

The ACLU and a host of other civil and immigrant rights organizations joined together earlier this year to form a coalition called Americans for Constitutional Citizenship to protect the current interpretation of the 14th Amendment.

“These legislators want to pass state laws that would create two tiers of citizens—a modern-day caste system—with potentially millions of natural-born Americans being treated as somehow less than entitled to the equal protection of the laws that our nation has struggled so hard to guarantee,” Wade Henderson, president of the Leadership Conference on Civil and Human Rights and a member of the ACC, said on the day of the coalition’s launch.

Those who oppose the birthright citizenship bills point to the 14th Amendment which says, “All persons born or naturalized in the U.S. are subject to the jurisdiction thereof.” There is no mention about the immigration status of a child’s parents. The sentence ends abruptly. They argue that very next line of the U.S. Constitution precludes Kavanagh and Gould’s efforts: “No state shall make or enforce any law which shall abridge the privileges or immunities of citizens of the U.S.”

Kavanagh welcomes the opposing arguments. “I’m glad they think that,” he said. “Let us go to court and we’ll have the U.S. Supreme Court eventually decide because that’s the way we settle disputes in this country.”

The second bill seeks to initiate a state compact that would need other states’ commitment and eventually Congressional approval. If Congress authorizes the compact it would, in effect become federal law. It’s a convenient avenue to try to attack the Constitution without having to go through the laborious process of actually amending it.

Under the bill, member states would join together in their new interpretations of state citizenship.

While legal scholars are confident that that the bills are unconstitutional, these bills undoubtedly affect the political climate in Arizona, which is still reeling from the anti-immigration bill SB 1070 which was just signed into law last year. Parts of SB 1070 were enjoined and that fight is winding its way through the courts right now, but portions of the law are still in effect. “This divisive legislation is appalling and shameful,” said Jennifer Allen, executive director of the Tucson human rights group Border Action Network. “Our legislature already dragged our state’s name through the mud with SB1070 and by driving our economy and services into the ground. They need to stop with these divisive, counter-productive and uncivil attacks on Arizonans and our nation as a whole.”

“We’re not going to sit by and allow these attacks to go on,” said Salvador Reza, an immigrant rights activist and organizer who was on his way to the Arizona State Capitol to protest the new bills this morning. “We will organize, and we will do whatever we need to to fight these attacks.”

“The hate and the animosity that they have created and that is spreading throughout the rest of the country, it’s out of control.”

Kavanagh could offer no immediate details about when the bill will move to committee or hearing. He and other Arizona legislators like Russell Pearce have faced criticism for pushing ahead with immigration bills when the state is mired in difficult budget conversations and facing an unprecedented deficit. He said he would wait until the budget was settled before bringing his bills to the floor. “The budget is very important,” Kavanagh said. “But we can do more than one thing at once.”

“If we get the correct court decision…we will not be dispensing citizenship like a door prize,” Kavanagh said. “Especially not for those whose parents snuck into this country illegally through the back door.