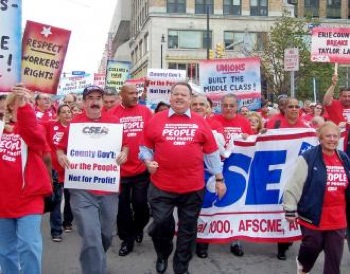 Turns out that the bankers who scored trillions of dollars in government bailout money aren’t responsible for the federal budget deficit in any way.

Neither are the super-rich who will continue to enjoy an immensely lucrative tax breaks enacted during the Bush administration thanks to a bipartisan deal brokered late last year.

And don’t point the finger at the Pentagon. The brass have accepted a $78 billion cut over the next five years–though they still want a budget-blowing $708 billion just next year to fund the endless wars in Iraq and Afghanistan and maintain a military machine that spends more than all its rivals combined.

No, the cause of the U.S. government’s record budget deficits is that greedy public-sector retiree who pulls in an outrageous $19,000-a-year pension.

That’s what America’s political leaders want you to believe, anyway. Thus, the Republican governor of Indiana calls public-sector employees a “new privileged class,” and his fellow GOP counterpart in New Jersey has been bashing teachers unions for the past year. And the newly elected Republican governors of Wisconsin and Ohio are out to turn those historic labor bastions into “right-to-work” states, with laws restricting or even banning public-sector unions.

It’s not just Republicans, either. Newly elected Democratic governors in New York and California have also targeted the wages and pensions of public-sector workers for further cuts, as a means of balancing the budget. And in Washington, as he was arriving at a deal with Republicans late last year to extend the Bush tax cuts for the wealthy, Barack Obama told federal workers they would be the ones to sacrifice–he announced a two-year wage freeze for all nonmilitary personnel.

It’s the kind of bipartisanship only a boss could love.

In their war on public-sector employees, these politicians are taking their marching orders from people like real estate and publishing mogul Mort Zuckerman, who has been pounding away at public-sector unions for months:

Millions of public workers have become a kind of privileged new class–a new elite, who live better than their private-sector counterparts. Public servants have become the public’s masters. No wonder the public is upset.

It’s a wonder that Zuckerman, who has a net worth of just $1.5 billion, doesn’t just give it all up and get a job as a social worker or teacher, where he can make some real money.

The corporate media have been working overtime to make the case for the billionaires. The latest salvo came from the CBS news show 60 Minutes, typically derided by the right wing as part of the “liberal media”:

Not all of the problems that Illinois and other states are facing right now can be traced to the recession. But the precipitous drop in tax revenues did expose decades of financial irresponsibility, reckless spending, unrealistic benefit packages for public employees, and the use of political gimmicks to cover up hidden deficits. It’s forcing state governors and the public to confront some harsh realities.

So in the view of 60 Minutes, the recession–the worst since the Great Depression of the 1930s–isn’t the main problem with state government budgets. The Wall Street crash caused by financial speculation merely “exposed” the “unrealistic” compensation of public-sector employees–as opposed to those richly deserved and eminently practical Wall Street bonuses, which will total nearly $90 billion for last year at just the five biggest U.S. banks.

In a sane society, the obvious starting point for closing the budget gap would be to tax the wealthy. And according to a recent opinion poll, nearly two-thirds of people in the U.S. favor doing exactly that, as opposed to slashing spending or laying off workers.

Instead, of course, we got a deal between Obama and the Republicans for a two-year extension of the Bush tax cuts for the wealthy. And as a consequence, the people who will have to pay for the crisis aren’t the superrich hedge fund managers or politically connected CEOs, but public employees who collect our trash, teach our kids, and provide what is often the only means of support for the most vulnerable in our society.

The truth is that public-sector workers’ compensation isn’t outstripping that of private-sector workers. The opposite is the case. According to a recent report commissioned by the Center for State and Local Government Excellence and the National Institute on Retirement Security:

Wages and salaries of state and local employees are lower than those for private-sector employees with comparable earnings determinants such as education and work experience. State workers typically earn 11 percent less and local workers 12 percent less.

During the last 15 years, the pay gap has grown–earnings for state and local workers have generally declined relative to comparable private sector employees.

Wages and salaries of state and local employees are lower than those for private sector employees with comparable earnings determinants, such as education and work experience. State workers typically earn 11 percent less and local workers 12 percent less.

Thus, the charge that public-sector workers are an “elite” should be seen for what it is–the latest broadside in Corporate America’s war on unions. Public-sector unions are among the few remaining strongholds of organized labor, and the budget gap provides business and politicians with a pretext to try to decisively weaken them–or destroy them entirely. As former Labor Secretary Robert Reich wrote recently:

Public servants are convenient scapegoats. Republicans would rather deflect attention from corporate executive pay that continues to rise as corporate profits soar, even as corporations refuse to hire more workers. They don’t want stories about Wall Street bonuses, now higher than before taxpayers bailed out the Street. And they’d like to avoid a spotlight on the billions raked in by hedge-fund and private-equity managers whose income is treated as capital gains and subject to only a 15 percent tax, due to a loophole in the tax laws designed specifically for them.

So now that the traditional union-bashers of the Republican Party have been joined by Democrats in preaching that pensions and benefits built up over decades have to be forked over to big capital, what’s next? How can labor fight back–and win the support of the public that’s being encouraged to see them as an enemy?

The country’s largest public employees union, the American Federation of State, County and Municipal Employees (AFSCME), is trying to counter the attacks with a new “Stop the Lies” campaign. And AFSCME President Gerald McEntee responded to the 60 Minutes hit job on the unions with a strong statement: “The fact is, hundreds of thousands of public employees, just like private-sector employees, have been laid off, and taken pay and benefit cuts–even as Wall Street executives lined their pockets with taxpayer money and took home huge bonuses.”

So far, so good. But McEntee goes on to say add that “public employees stand ready to help state and local governments get through the economic storm.” That implies the union will accept concessions for public employees who are already taking a pounding.

As the Economist magazine notes, “The immediate battle will be over benefits, not pay…America’s states have as much as $5 trillion in unfunded pension liabilities.” If the politicians have their way, AFSCME retirees, who on average receive just $19,000 per year, will have to make do with less.

Extracting concessions from public-sector workers, moreover, will harm working people generally. In the name of “fiscal responsibility,” workers will be told to expect larger class sizes for their children, shuttered libraries and parks and limited access to urgently needed social services.

The offensive against public-sector workers is a classic divide-and-conquer strategy–concessions won from public workers will put even more pressure on private-sector workers who have been hammered by corporations taking advantage of high unemployment to force those who still have jobs to work harder for less.

The only way to defeat a divide-and-conquer strategy is to not let our rulers divide us. Whoever signs their paychecks, workers an interest in organizing together to defend and improve their living standards–and challenging their common enemy, the corporate bosses and Wall Street bankers, and the bipartisan establishment that serves the elite.

Public-sector workers and their unions are under an enormous assault, and need our support and solidarity. The unions can and should call on that support–and launch an unapologetic defense of social services and a campaign to tax the wealthy to pay for them.

This article was originally published as an editorial on SocialistWorker.org.