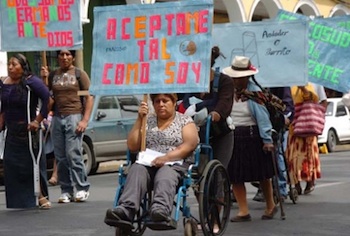 On Monday, shots rang out in the air. Chants followed. The intersection of Heroinas and Ayacuchu, Cochabamba’s central thoroughfare, was completely shut down by a circle of people—many in wheelchairs, with walkers or crutches—demanding rights for people with disabilities. Their central demand was for a bono, or a monetary form of social security, paid as a monthly stipend.

“Many countries have a bono. Bolivia is one of the few countries who has nothing,” said Juana Illianez, standing strong on her walker while blocking traffic on Ayacucho. “A year ago, Evo promised a bono, housing support, and job training. But where is it?” Juana, along with over 100 more members of the Association of Fraudis Perdis, traveled from San Carlos to participate in the mobilization.

Another member of the same organization, a man going by Lupa Zancan, pointed out that rights for people with disabilities are intricately linked to class. “El Linera”, he said, pointing to the Vice President of Bolivia, “he had an operation because of back problems. If he could not have paid for that, he would be out here with us today.” But, Vice-President Linera was not present, and the group of 200 strong had begun at the mayor’s office and then marched and wheeled to they busiest intersection in Cochabamba, demanding to speak to the Governor.

“It´s my first march,” said Miguel Alejo, sitting in his wheelchair in the middle of the street, with obvious excitement on his face. “We will be here until our demands are met.”

In addition to hundreds of adults with disabilities, there was also substantial participation from mothers who are caretakers of children with disabilities. Celia Mirasola Calle Sanchez is one of those women, and like many others she is a single mother. “His father left because he is special,” she said, as she pointed to her 8-year-old son who she identified as being autistic. “My whole family has turned their back on us. We have no home right now, I can’t take him to school, I sell lottery tickets in the market to make money, but it is not enough.” A Program of Housing for People with Disabilities has been announced by the Morales government, but it has yet to be realized in any tangible sense.

Ms. Calle Sanchez ran off to grab a hold of her 8-year-old, with her other arm cradling a toddler, and then she turned back, “Discrimination, that’s the problem,” she said with a sigh, “that is why we are here.” Her words were echoed by many other single mothers.

“I am here because our children face a lot of discrimination in the public schools. They push them to the corner, and they don´t help them,” lamented Dementaria Herida Valdivia. Her son has repeated the same grade three times, but has not received any special support in the public schools. Ms. Valdivia has joined together with other mothers and people with disabilities to form the Association of Disabled Peoples of Tuquipaya.

Another mother, Elisabeth Carca Ladymartis, said that none of the public schools in Izqaypata would accept her son. For years she traveled 30 minutes, each way—in both the morning and afternoon—to take and pick up her son from a school in Quilacollo. And even then, “he was discriminated against,” she said. The trip became too costly and time-consuming and so, she has taken him out of school.

While there was not a fixed amount being demanded at this mobilization, most people agreed that it might be comparable to the 200 Bolivianos, or less than $30 USD, that seniors receive monthly. When asked why people need the bono and what they might spend it on, everyone’s answer was consistent: food, medicine, doctors visits, repairs on wheelchairs or other medical equipment, and physical therapy.

There are also similar actions taking place throughout Bolivia this week. Other demands in addition to the bono included, housing support, job training and placement reforms in the public schools, an end to discrimination and dignity for people with disabilities.

The new Bolivian constitution contains provisions that protect the human rights and freedoms of all citizens, and prohibit discrimination on various grounds, including disability. And the most important legislation framing issues of disability in the country, Law 1678 (1995) prohibits disability-related discrimination in employment, education, health and social services, both public and private. Despite these laws being in place, the reality that people with disabilities face in the country is not being addressed, while the existing laws are not being enforced.

Olga Coca of Nuevo Amanacer in Cochabamba spoke to the politicians, “They do not see the realities. They don’t understand our reality, the reality of transportation, the reality of the roads being to rough for my wheelchair, the question of who will care for the children at every moment of the day.” She then propped her child on her lap, sitting in her wheelchair, still blocking traffic. “Yes, we want the bono, but we want our rights and we want dignity too, we are human beings and we demand dignity.”

Olga is one of the lucky ones who has and is able to work a paid job; she works as a secretary in an office. Despite promises in the new constitution of creating more job opportunities for those with disabilities, participants at the mobilization were critical of the government and felt that they could be doing more to help with job training and placement. Article 56 of the new Bolivian Constitution offers economic incentives to employers who contract people with disabilities. “We want the job training, yes, but of course, some of us will not be able to work jobs and sadly, in Bolivia, they don’t recognize the different work and capacities of each person,” Olga added.

The energy was high on the streets with march leaders asking, “What do we want?”, and the participants responding, “a bono.” “For what?”, they asked, “to live”, the participants replied. As the rain started pouring down, and the military stood in formation by the blocked intersection, the protesters began to disperse. They had held the intersection for more than three hours—and continue to hold on to their dignity.