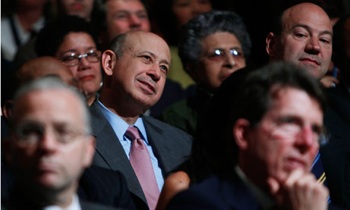 So, now we know about the $15bn-plus 2010 pay package for Goldman Sachs partners and employees. The top rungs will get their many millions each, with lesser and lesser amounts going down the GS hierarchy. The mass of its more than 35,000 employees will, as usual, get much, much less than the top. In addition, the appreciation of Goldman’s share prices likewise adds billions to employees who got stock options, which were likewise distributed very unequally throughout the firm. The unequal division of rewards within Goldman Sachs mirrors and mocks the far larger social divide it feeds.

While vast wealth flows for the tops of finance, austerity is the watchword across the United States. Every one of the 50 state governments and nearly all of the thousands of city and town governments are sharply reducing their citizens’ economic wellbeing. Their debates concern the mix of raised taxes and reduced public payrolls and services to impose on a citizenry already reeling from the continuing economic crisis conditions: high unemployment, home foreclosures, job insecurities and benefit reductions.

US capitalism continues to dole out wealth for a few and austerity for the mass. Economic and social divisions helped bring on the crisis. Wage stagnation since the 1970s had enabled profits to boom, but it also provoked family debts and financial speculation that spiraled to the far side of sustainability. As the crisis deepened, rising unemployment turned wage stagnation into wage and job benefits declines. Home-ownership for millions deteriorated into a mass of empty homes confronting stunned ex-homeowners. Economic and social divisions deepened and hardened.

Now, in the next act of an accumulating social tragedy, the governments’ responses – austerity – drive yet another degree of separation between the 10 % at the top of the nation’s corporate pyramid, and of its income and wealth distributions, and everyone else.

Just like speculation in credit default swaps and “jumbo” mortgages for people without jumbo incomes, deepening economic divisions will prove unsustainable. Clearly, Goldman Sachs, JP Morgan Chase, and the other financial giants either do not see or do not care about that deepening. In any case, they take no responsibility for producing or preventing or offsetting it.

Meanwhile, deprived of all but a few, weak organisations to articulate a clear, critical analysis of what is happening, the mass of US citizens watch, demoralised, and fume. Millions of former supporters turn away from a president as his promises of “hope and change” fade from memory or become objects of bitter humour. The space is cleared for the Tea Party movement to displace anger over deepening economic divisions as epitomised in big banks’ pay packages onto politicians in general and Democrats in particular. Offering only another variant of austerity, the Republicans guarantee that they, too, take no responsibility to change the basic direction of this society’s trajectory. Economic and social divisions will keep deepening.

The new governor of California announced last week that he proposed to cut about $1.5bn from the largest and arguably the best state system of higher education in the country. Such a cut will further damage the quantity and quality of the skilled and hi-tech workforce on which the nation’s economic future depends. Governor Brown also proposed over $1bn in cuts to the Medicare program providing healthcare to hundreds of thousands of California’s poorest residents.

Meanwhile, Goldman Sachs pays out $15bn, alongside the other big banks’ comparable payouts. More than yet another glaring contribution to social division, these contrasts represent stages on the path to self-destructive social implosion.

This article was originally published by The Guardian/UK.