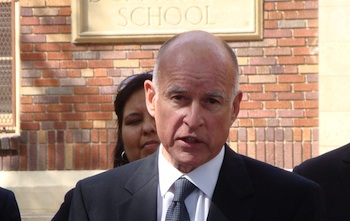 The DREAM Act is back, in California at least. Today Assemblyman Gil Cedillo re-introduced the DREAM Act which would allow undocumented youth who are accepted to college the ability to apply for institutional financial aid and state grants from the state’s public universities, state and community colleges.

Cedillo’s new strategy is to split the bill in two. The San Jose Mercury News reports that one bill would allow undocumented immigrant students who are California residents to apply for Cal Grants, a state student aid program for low-income students who are accepted by state community colleges or the University of California. The second bill will allow undocumented immigrant students to apply for fee waivers from public institutions that they are accepted by.

The California DREAM Act was first introduced in 2006 and passed the California state legislature but was vetoed three times by the former Gov. Arnold Schwarzenegger.

California’s new governor Jerry Brown supports the California version. “Yes to the California Dream Act,” Brown said during a debate with Whitman last year. “I would have signed that bill.” If passed, California would become the third state after New Mexico and Texas to allow undocumented immigrant students to access public student financial aid.

The federal DREAM Act would have granted undocumented youth with a clean criminal record who commit two years to higher education or the military and clear myriad other hurdles a chance to become citizens. A version of it passed the House late last year but failed to clear a cloture vote in the Senate.