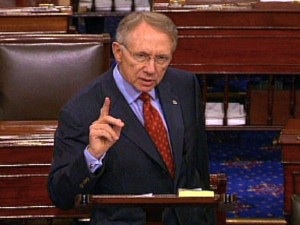 That is the question that supporters of Social Security should be asking as we brace for President Obama’s State of the Union address next week. Specifically, the question is whether Senate Majority Leader Harry Reid will keep up his spirited defense of Social Security or whether he will buckle to the pressure from the financial industry and the Washington insiders.

For those who missed it, Senator Reid distinguished himself by saying the obvious on one of the Sunday talk shows two weeks ago. He said that Social Security is not contributing to the deficit and that the shortfall it faces is still distant and relatively minor. He said he was tired of people picking on this program, which is vital to the financial security of tens of millions of retirees and disabled workers and their families.

Truth is rare in Washington, so Senator Reid’s comments really stood out. If the Senator is prepared to hold his ground, he can save the program.

There is no doubt that the forces arrayed against Social Security are enormously powerful. The wealthy hate the idea of government money going to anyone but them, and since the vast majority of Social Security benefits are going to low and middle-income families, the program is an outrage to their sensibilities.

The financial industry also knows a cash cow when they see one. It would take more than $10 trillion in private accounts to generate the same amount of money as Social Security pays out each year in benefits. If the financial industry collected just 1.0 percent of this sum in fees each year, it would mean another $100 billion a year into the coffers of the Merrill Lynch set.

And, for anti-government conservatives, Social Security is the worst nightmare imaginable: a government program that really works. Its administrative costs are less than one-tenth as high as they are for financial industry. There is minimal fraud and the program does exactly what it was supposed to do: provide a core retirement income and protect workers and their families against disability and early death.

For these reasons, it is inevitable that powerful forces would be looking to ax Social Security. Much of the media, led by the Washington Post (a.k.a. Fox on 15th Street), have abandoned rules of objectivity in their quest to paint Social Security as a basket case.

Peter Peterson, everyone’s favorite Wall Street billionaire, has committed much of his fortune to gutting the program. He is buying everything in sight to advance this goal. This includes setting up a new foundation, paying for scary anti-Social Security documentaries, setting up a fake news service (the “Fiscal Times”), sponsoring rigged public forums (America Speaks), and even playing silly games on the mall.

Can Senator Reid stand up to this massive push?

Well, Mr. Reid has two things on his side: public opinion and the truth. As far as public opinion, there is no doubt that Social Security is a hugely popular program. Everyone loves the security that it provides them, their parents, or their grandparents, and their children. Its sky-high approval rating is across the board with all demographic groups and spans the political spectrum from progressive Democrats to Tea Party Republicans.

The truth is also on Reid’s side. One only has to read the Social Security Trustees Report to see that the program will be fully funded for the next 27 years even with no changes at all. After that date, it would still be able to pay almost 80 percent of scheduled benefits indefinitely, even if nothing were ever done. Furthermore, it is not difficult to find progressive ways to make up the remaining shortfall. Just raising the payroll tax cap to where the Greenspan commission set it in 1983 makes up more than one-fourth of the projected shortfall.

The fixes proposed by the Social Security cutters would involve real pain, some of it longer term and some of it very immediate. Most notable is their proposal to reduce the annual cost of living by 0.3 percentage points. After ten years, this would reduce retirees’ benefits by close to 3 percent, after 20 years the reduction would be 6 percent. This would be a big hit to many seniors who are surviving on less than $20,000 a year.

The longer-term plans call for making the program more “progressive.” This generally means cuts for people who earned $50,000 or $60,000 a year in their working lifetime. That’s better than the typical worker, but it doesn’t fit most people’s conception of rich.

What is so frustrating in this story is that we are not a poor country and are not getting poorer. There is plenty of money out there, if our politicians ever had the courage to confront the rich and powerful. We could easily raise more than $150 billion a year from taxing Wall Street with a financial speculation tax.

We could save as much on prescription drugs if we started having them sold in a competitive market and adopted a more efficient mechanism for financing drug research. And, we could have the Federal Reserve Board hold the bonds it is now buying so that taxpayers are not burdened with hundreds of billions a year in additional interest payments to the wealthy in future decades.

These are items that we would be discussing if the political system were not so dominated by moneyed interests. So, in this context does Senator Reid have a chance?

Actually he has a very good chance. There is an important precedent for Senator Reid’s defense of Social Security. In 1997, President Clinton had reached a deal with Trent Lott, then the majority leader in the Senate, to reduce the annual cost-of-living adjustment for Social Security. Their deal would have lowered the adjustment by about 1 percentage point annually. After 10 years this would mean that benefits would be almost 10 percent lower and after 20 years they would be close to 20 percent lower.

This plan might have gone through, except for the opposition of Richard Gephardt. At the time, Gephardt was the leader of the Democrats in the House. Even though the Democrats were a minority, everyone knew that if Gephardt spoke out forcefully against this deal, it would create too much political heat to carry it through.

This saved the day. As President Clinton said at one of the Peter Peterson deficit fests last spring: “I wanted to cut Social Security, but they wouldn’t let me.”