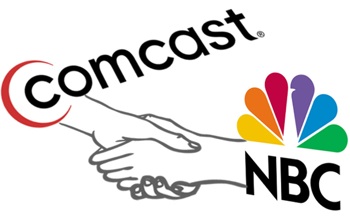 The Federal Communications Commission and Department of Justice have given the green light to a merger between Comcast and NBC. Reportedly worth $30 billion, the deal has stoked new concerns among liberal watchers that a marriage between the nation’s largest TV network and one of the biggest broadband service providers could make it harder for independent artists and communities of color to reach broader audiences.

This week’s decision to approve the deal capped over a year-long review. As Eliza Krigman writes at Politico, the move brings together two media giants that will now own popular content — including popular shows “The Office” and “30 Rock” — along with the platform to distribute it. And that massive aggregation of power has many concerned.

“The potential for walled gardens, toll booths, content prioritization, access fees to reach end users, and a stake in the heart of independent content production is now very real,” FCC Commissioner Michael Copps, a Democrat, wrote in his dissent, according to Politico.

“You don’t have to believe in conspiracy theories or sinister moguls, it’s just rational business behavior that Comcast will favor its own content,” Lowell Peterson, executive director of the Writer’s Guild of America, told Politico. “The Internet realm is what we’re most excited about because it is open. Writers can create stuff by themselves or with a couple of colleagues and they don’t have to go through they do not have to go through NBC-U or Time-Warner.

“We’re concerned that a deal like Comcast will throttle that openness as they push their own stuff and our opportunity will go away.”

Assessing how committed Comcast and NBC are to diversity goes beyond examining their contributions, donations or community service projects to aid nonprofit, community and church groups. While those initiatives are important, today’s hearing was about understanding how diversity, programming, management, ownership and consumer prices could be impacted by a merger of this size. In addition, we must evaluate whether the merger of the nation’s largest cable and Internet company with one of the nation’s major network news and content providers is anti-competitive, unfairly dominating the market and thereby squeezing out alternative outlets for diverse voices and cultures.

This is just the latest part in the saga over telecommunication and Web rights in communities of color. In December the FCC approved a set of lackluster net neutrality rules that are meant to maintain an equal playing field on the Web. Yet those rules have left some gaping holes, some of which service providers are already exploiting. Metro PCS, the nation’s fifth largest mobile provider, was recently accused of blocking content on some of its new data plans.