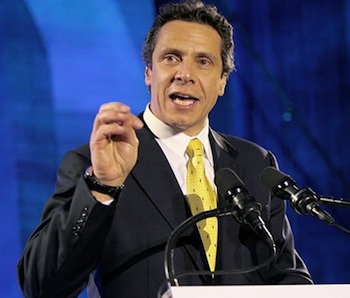 In his State of the State address January 5, newly elected New York Gov. Andrew Cuomo outlined the deep state budget cuts he plans to make to close a $10 billion deficit projected by April 1.

Two days before his address, Cuomo struck a posture of shared sacrifice by announcing a 5 percent cut to his $179,000 annual salary, a gesture he then used to justify a salary freeze for all New York state employees.

He also allowed to stand a layoff of 900 state workers, including prison chaplains and motor vehicle clerks, ordered by Cuomo’s predecessor David Paterson. The layoffs were retaliation against the public employee unions for refusing to contribute $250 million in concessions requested by the governor last year.

In addition to the salary freeze, Cuomo will seek $2 billion in cuts to Medicaid spending to be determined by a Medicaid Design Team that he’s appointed. When these are added with the loss of federal matching funds, the cuts will cost New York Medicaid recipients $4 billion, almost twice the cuts proposed by former Gov. Elliot Spitzer in 2007.

Since most of the Medicaid program has already been brought under managed care, the cuts will focus on revamping coverage of one of the highest-cost categories of Medicaid patients–beneficiaries suffering from severe mental illnesses such as schizophrenia and bipolar disorders, chronic drug problems or both. Home health care is also slated for cuts.

In keeping with his campaign pledge “No new taxes, period,” Cuomo is also seeking a cap on property taxes at 2 percent, or the rate of inflation. These taxes, levied by school district and local governments outside of New York City, are used to finance schools, municipal services and pensions. In addition to having devastating effects on local schools and services, these tax caps could lead to an increase in municipal bankruptcies and pension defaults, following the recent examples in Hamtramck, Mich. and Prichard, Ala. (New York City relies on a city income tax to fund services).

Cuomo is also seeking to introduce competitive measures that would emulate at the state level the federal Race to the Top program introduced by President Barack Obama and Education Secretary Arne Duncan. School districts that are most successful at raising academic performance would be awarded money from a $250 million fund. A second fund of equal size would reward school districts that win a competition for reducing administration expenses.

Of course, as Race to the Top has shown, the “winners” of the rewards sweepstakes will be those school districts that mount the most aggressive attacks on teachers unions, with all-too-familiar results: erosion or elimination of tenure and seniority rights, larger classroom size, staff and teacher layoffs, schools closed and reopened as charter schools, increased privatization, elimination of “enrichment” (i.e. everything besides math and reading), higher teacher turnover and greater teaching to the test.

Students, parents and teachers in these “winning” districts will be losers, not winners.

With the dramatic statement that “an incarceration program is not an employment program!” Cuomo also seeks to close upstate juvenile penal facilities that cost $200,000 per year per juvenile. While this is to be welcomed on one the hand as a shrinking of the penal system, it is worth pointing out that Cuomo is emptying prisons built by his father Mario, a former New York governor. What the Cuomo dynasty hath given, it is also taking away.

Most significantly, at a time when, according to a recent 60 Minutes/Vanity Fair poll, 61 percent of Americans favor raising taxes on the rich, Cuomo will also allow the retirement of a temporary tax increase on households making over $200,000 annually.

Cuomo’s pretext is that allowing it to stand would violate his no new taxes campaign pledge–even though the “millionaire’s tax” raises $1 billion annually, and isn’t a new tax at all. The end of this tax comes on top of the extension of the federal tax cuts passed under George Bush, creating a windfall for New York’s wealthy. This from a governor who campaigned with ads of multiracial working class New Yorkers saying “Andrew Cuomo works for me.”

These cuts make it clear that Cuomo plans to make working New Yorkers pay for the economic crisis, which had its origins in the state’s own Wall Street, while the wealthiest New Yorkers, and their businesses enjoy greater and greater immunity from taxation.

According to Cuomo, “We have the worst business tax climate in the nation, period. Our taxes are 66 percent higher than the national average.” But according to an article by Richard Wolff in Monthly Review, a closer look at the state’s tax revenues shows a different picture: From 2000-2010, New York state personal income taxes increased 50 percent, while the state’s business taxes rose only 20 percent.

In fact, freezing state employee salaries is only expected to save between $200 million to 400 million–compared to $1 billion with the extension of the millionaire’s tax.

Also, raising business taxes by 50 percent–a proposal commensurate with the personal tax increases of the past decade–would put the New York state treasury in a much better fiscal position. Such a move would be widely supported by the millions of New Yorkers who elected Cuomo, and would avoid further penalizing New Yorkers for an economic crisis they didn’t create.

Even though Cuomo made his pro-business and anti-labor plans quite clear from the outset of his campaign, labor leaders gave his campaign millions of dollars. Incredibly, the United Federation of Teachers (UFT) spent a total of $6.3 million on Albany lobbyists and campaign contributions in 2010, with part of that going to Cuomo’s campaign, despite the fact that the union didn’t endorse him. By June 2010, organized labor had already contributed $1.3 million to Cuomo’s war chest.

Union members found their dues being used to support a gubernatorial candidate who cloaks his attacks on their jobs and unions with rhetoric of shared sacrifice.

Yet despite the brutality of Cuomo’s plans for workers, as of January 11, the Web site of 1199 Service Employees International Union, the biggest health care union in the state, has no response to the cuts, even though the Medicaid reductions are expected to hit hard at home health care, one of the industries where SEIU has experienced its highest levels of membership growth in recent years.

Richard Ianuzzi, president of New York State United Teachers, said in response: “There are many ill-conceived property tax cap proposals being promoted and we are clearly opposed to them.”

But he then acquiesced to Cuomo’s tone of shared sacrifice by saying, “We need to figure out how to meet the economic needs of this state without jeopardizing essential public services, especially providing the quality public education and health care that working New Yorkers depend on. We anticipate working closely with the governor–and the Assembly and Senate–on just how to do that.”

The United Federation of Teachers, which represents 80,000 members in New York City, is also silent on the Cuomo cuts, even though it stands to lose $300 to 400 million in school monies if the cuts go through.

If the unions are quiet about Cuomo’s tax plans, other parties are positively enthusiastic–Republican state Sen. Ken Lavalle said, “Listening to the [governor’s address] today, I could have sworn he was a Republican. Property tax and spending caps, smaller government and less regulation, these are the things everyone wants.”

Republican Assemblyman Dan Losquadro is also excited about Cuomo’s proposed cuts: “I look forward to working with Governor Cuomo to enact a property tax cap and state spending cap in the months ahead. By capping property taxes and state spending, lawmakers will be providing Long Island homeowners with real relief from skyrocketing property taxes while putting into place a budgetary safeguard to end the tax and spend mentality that has brought state government to the financial brink.”

To resist the assault on their standard of living and social safety net, New Yorkers must organize to:

— Reject the rhetoric of shared sacrifice, and instead call for putting the tax burden squarely where it belongs: on wealthy individuals and businesses;

— Reject Medicaid cuts that target the most vulnerable sections of the population and threaten to revive policies that put thousands of mentally ill people on the streets decades ago;

— Reject lobbying strategies in light of the UFT’s $6.3 million giveaway to Albany that has earned it nothing but more attacks.

The model for such a fightback can be seen in the work done by the Grassroots Education Movement (GEM) in New York City. GEM is a coalition of parents, students and teachers that has mobilized against charter school expansions and school closings, and has pressured the UFT to mobilize its members against the cuts.

New Yorkers must be clear: “rewards” that pit school district against school district are just ways to dilute what is already very thin gruel. These rewards go hand in hand with punitive assaults on worker rights that are driven by pitting worker against worker.