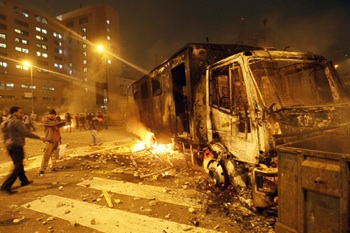 Every US administration has its mouthpiece in Washington’s think tank world, its courtier that will slavishly praise its every utterance. For the blessedly bygone Bush administration, that echo chamber was the American Enterprise Institute and the neo-conservative broadsheets in its orbit. For the Obama administration, it is the National Security Network, an operation founded in 2006 to bring “strategic focus to the progressive national security community.”

With one US-backed Arab despot dislodged and dodging Interpol, and another facing an intifada of historic proportions, many eyes looked to Washington, hopeful that President Barack Obama might reprise his ballyhooed Cairo speech of June 2009, showing the restive Arab masses that he felt and, perhaps, really understood their pain. Instead, Arab populations have heard a variation on Washington’s long-standing theme: “The Obama administration seeks to encourage political reforms without destabilizing the region.” That sentence, taken from the National Security Network’s January 27 press release, says it all: Democracy is great in theory, but if it will cause any disruption to business as usual, Washington prefers dictatorship.

And so it was no surprise, though a deep and indelible blot upon Obama and his “progressive” entourage, when the president took a White House lectern on the evening of January 28 — Egypt’s “Friday of Rage” — and announced his continued backing for the indefensible regime of President Husni Mubarak. In so doing, he ensured that the Arab fury of the winter of 2011 would be directed increasingly toward the United States as well as its regional vassals.

January 28 in Egypt was a rollercoaster of a day. The mass demonstrations following up on the January 25 Police Day uprising turned out to be larger and more vehement than even optimistic observers expected. Police stations and ruling National Democratic Party (NDP) headquarters burned to the ground in the middle-class Cairo neighborhoods of al-Azbakiyya and Sayyida Zaynab, as well as in poorer quarters, in Alexandria, Suez, Port Said, Damietta and Damanhour as well as in Upper Egypt and the Sinai. The NDP’s home base in Cairo’s main Tahrir Square itself went up in flames. Alexandria, Egypt’s second city, was overrun by protesters who had overwhelmed the riot police. Tanks rolled in to the cities; a curfew was declared; but the crowds ignored it and the army (for the most part) did not shoot at them.

On Al Jazeera, whose live feeds in both English and Arabic have riveted world audiences, the anchors did not quite know what narrative frame to employ, so rapid was the pace of events and so contradictory were the signals coming from the corridors of power. In Washington, outgoing White House Press Secretary Robert Gibbs held a special briefing to discuss Egypt and, to a direct question, said that Obama had not spoken to Mubarak. Gibbs continued that US aid to Egypt, recipient of the second-largest annual packages since 1979, would be placed “under review.” A Pentagon spokesman added that the Egyptian army’s chief of staff, in Washington for consultations, had cut his trip short and returned home. Had the Obama team abandoned the Egyptian dictator to fate? In Cairo, as midnight approached, the speaker of the Egyptian parliament, Fathi Surour, said that he would have an “important announcement” soon. By the Egyptian constitution, like the Tunisian one, the speaker of Parliament is custodian of state in the case of a vacant presidency. Was Mubarak boarding a plane for exile? On the Arabic-language channel, several of the reporters, commentators and analysts could barely contain their jubilation. Not only did it seem that Mubarak would decamp exactly as Tunisian President Zine El Abidine Ben Ali had done; he would do so with Egyptian protesters having died in fewer numbers than Tunisians.

Then the 82-year old Mubarak appeared on Egyptian state television himself. Egyptians must have felt as if they had traveled back in time, to the moment of any minor hiccup in the regime’s 30-year reign: Claiming to carry the protesters’ grievances in his heart, Mubarak vowed to speed up his program of political and economic reforms. Clearly, judging by the scenes in the streets, he had chosen the wrong team of ministers to implement the grand vision. That cabinet would be dismissed and a fresh one empaneled, all under his wise executive guidance, of course. In the meantime, he warned, “setting fires in the streets” was not the way to engage in dialogue with his government. The forces of law and order would prevail.

To this fossil of an oration, this half-debased, half-delusional assurance that all was normal as the capital burned in the wee hours of the morning, Egyptian opposition figures had an immediate, unequivocal response. Amin Iskandar of the Karama Party, a splinter of the Nasserist movement, predicted that Mubarak had delivered his last speech, for the uprising would continue unabated on the morrow. “The Egyptian people will not be fooled again” by droning repetition of past promises unfulfilled, he declared. ‘Isam Sultan, Al Jazeera’s next guest, one-upped Iskandar by saying that the demonstrators would press on without sleep until Mubarak was gone for good. Such, after all, has been the crystal-clear demand of the protests on Police Day and subsequently.

But apparently the Obama administration did not care to listen. Obama strode to the podium just minutes after Mubarak had finished his remarks, leaving little doubt that the timing of the two speeches had been coordinated in advance. First evincing concern to avoid further bloodshed, he then tacitly equated the heavily armed, habitually brutal Egyptian security forces with the weaponless, repeatedly wounded protesters, calling upon the latter as well to “express themselves peacefully.” He echoed the condescension of Mubarak himself in saying of the protesters that “violence and destruction will not lead to the reforms they seek.” He then added injury to insult, clarifying that America’s “close partnership” with Egypt was in fact with Mubarak, who had “pledged a better democracy” and now must “give meaning” to his words.

By all means, the unrest across the region has been occasion for Washington to scold its Arab allies for their unaccountable neglect of the aspirations of youth and their unseemly embezzlement of treasuries. At the Forum for the Future in Doha, Qatar, held on January 13, Secretary of State Hillary Clinton exhorted her audience of Arab elites to “build a future that your young people will believe in, stay for and defend.” Invest in vocational education, she urged. Create jobs. Root out corruption. Hold elections whose outcome is uncertain. Drop the reflexive hostility to civic engagement by regular folks. But the regimes remain the political address of record for her administration; having created the present crises through decades of avarice and contempt for the people they rule, they are now to be trusted to resolve the impasse. Vice President Joe Biden was typically clumsy, but most assuredly not off-message when, in response to a direct question from PBS host Jim Lehrer, he declined to label Mubarak a dictator, saying instead: “I think the time has come for President Mubarak…to be more responsive to some of the needs of the people out there.”

No, as the Tunisian example showed, and as the Egyptian experience may yet drive home, the US will stand by its favored authoritarian Arab states until the bitter end. From the January 28 performance on the Potomac, it is not clear that the US can even imagine an alternative course.

The reasons for this stance have changed little over the decades since the US became the superpower in the Middle East. Strategic interest number one is the flow of oil from the Persian Gulf to the world economy, unimpeded by a rival hegemon or a regional upstart that might raise prices dramatically or deploy the oil weapon to extract political concessions from the West. Number two is the security of Israel. But third — not to be confused with tertiary — is the stability of satrapies that Washington can trust to safeguard its other interests and initiatives, whether the US-sponsored “peace process” between Israel and the Palestinians (and the blockade upon Hamas that Egypt helps to enforce) or the campaign to curtail Islamist movements for which Tunisia’s Ben Ali so eagerly signed up. The US rewards its clients with cash and copious armaments, with scant regard for their records on democratization or human rights. After the Yemeni regime canceled elections in 2009, its aid package was quintupled. There have always been numerous dissenters within the US foreign policy apparatus who know the damage that is being done, but they are resolutely kept out of positions of real authority.

That roguish Bush administration, as the National Security Network flacks are fond of repeating, “destabilized” the Middle Eastern order, not just with its rash invasion of Iraq but also its swashbuckling talk of “freedom on the march” through the thickets of US-approved autocracy. The “progressive national security community,” like those to its right on Washington’s narrow political spectrum, is keen to be taken seriously by power, and so generally restricts its judgments of policy ventures to the impact on the US interest. The catastrophic loss of Iraqi life is rarely mentioned as a point against the invasion, for instance, and the sincerity of the Bush administration’s “democracy doctrine” is usually granted arguendo, civility being far more important to American politicos than accountability or, for that matter, decency.

Amidst the hand wringing in the mainstream media over Obama’s “limited options” in Egypt, through whose Suez Canal cruise oil tankers and the warships of the US Fifth Fleet, the truth is that the entire debate over democracy promotion in the Arab world and greater Middle East has been one long, bitterly unfunny joke. The issue has never been whether the US should promote democracy; it has been when the US will stop trying to suppress it. The bargains with tyrants lay a “commitment trap” for Washington, which must solemnly swear allegiance to each strongman lest others in the club have second thoughts about holding up their end. The despots, in turn, assume that the Marines or their equivalents will swoop in to the rescue if need be. Most, like Ben Ali, are mistaken, if nothing else because an ambitious underling is often waiting in the wings. Meanwhile, just as Iranians have not forgotten the Carter administration’s eleventh-hour loyalty to the Shah some 32 years later, neither will Pakistanis soon forgive the US for standing by Gen. Pervez Musharraf.

In the aftermath of the September 11, 2001 terrorist attacks, Americans wondered why their country had been targeted. Many, of course, settled upon the solipsistic, emotionally comforting explanation that “they hate us for our values” or resorted to conspiracy theory about Islam and world conquest. Saner sorts looked to the US history of support for Israel in its colonization of Palestine or coziness with certain kingdoms sitting atop vast pools of petroleum. But these factors have never been the whole answer. All who continue to wonder about the rest should ponder this day, January 28, 2011. The words of Obama and his chorus of apologists say it all: When it comes to the aspirations of ordinary Arabs for genuinely participatory politics and true self-determination, those vaunted American values are suspended, even when “special relationships” and hydrocarbon riches are not directly at issue. And the anti-democratic sentiment is bipartisan: On this question, there is less than a dime’s worth of difference between “progressive” Democrats and Republican xenophobes, between pinstriped State Department Arabists and flannel-clad Christian fundamentalists, between oil-first “realists” and Israel-first neo-conservatives. There is none.

This article was originally published on MERIP.org.