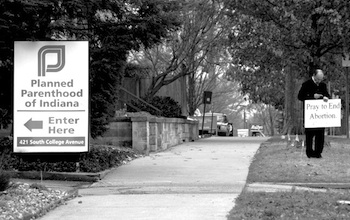 Anti-abortion activists seem to be taking a page out of James O’Keefe’s handbook in their latest attempts to take down Planned Parenthood. O’Keefe is the conservative activist who dressed up as a pimp and ignited a viral firestorm that eventually brought down ACORN. This week the AP reported that Planned Parenthood has notified the FBI about a man who’s purporting to be a sex trafficker and trying to entrap clinic employees. If proved true, the allegations mark the latest in a conversation that’s overwhelmingly about poor women of color, who are in the most danger when abortions are harder to access.

Planned Parenthood has long been a target of the anti-abortion movement for providing abortions. According to the report, the man has visited several clinics this month and requested information about services for sex workers, some of whom he said are under 18 and may be undocumented. While the FBI’s investigation is just beginning, an internal inquiry done by the organization itself linked the unidentified man to Live Action, an anti-abortion group that’s targeted Planned Parenthood in the past.

The accusations were all but confirmed by Live Action founder and president Lila Rose, who called the assertion “very interesting,” according to a report in the Washington Post. Rose also noted that while she couldn’t confirm or deny the claims, a videotape project was in the works.

“The story that speaks loudest will be in the evidence,” she said. “I can’t comment until we release the visual evidence,” Rose told the Post.

The visits happened between January 11 and 15 at clinics in New Jersey, New York, Virginia, Indiana, Washington, D.C., and Arizona.

Planned Parenthood Federation of America president Cecile Richards wrote to Attorney General Eric Holder that even if the whole situation isn’t a hoax, it’s evidence of a multistate sex trafficking ring. But for Richards, the proof of a takedown plot is hard to deny.

“Once inside, these people have recorded `undercover’ videos of their conversations with our clinic staff and then selectively and maliciously edited the videos,” she wrote, according to the Post. “This may be happening once again. If so, this kind of activity should be firmly condemned.”

Reports of the FBI’s investigation surfaced on Monday, the same day that anti-abortion advocates held their annual March for Life in Washington, D.C. to mark the anniversary of Roe. v. Wade, the Supreme Court’s landmark ruling that legalized abortion in 1973. This latest incident marks the most recent attack on abortion, a conversation that’s really about poor women of color, who are the ones left most in danger when abortions are harder to access. Michelle Chen has written on relatively new findings on how entwined abortion has become with poverty. A Guttmacher Institute study found that abortion patients are disproportionately poor, and overwhelmingly black or Latina. Chen noted:

Now we know that the link between poverty and abortion is deepening, just as state lawmakers are pushing laws to limit access to abortion, and while some in Washington have worked to tighten abortion restrictions through health care reform. Maybe there’s a conspiracy at work here after all: a convergence of political agendas that quietly seek to maintain America’s medical apartheid.