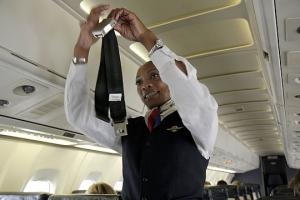 Delta flight attendants have submitted more than 150 reports to the government that they were coerced, intimidated, or influenced by Delta Airlines during their recent union election. They are asking for a re-vote.

Delta “coerced and intimidated Flight Attendants through a relentless campaign that seeped into every facet of the…workplace and regularly reached into Flight Attendants’ homes,” the flight attendants union (AFA-CWA) wrote in a November appeal to the National Mediation Board, which conducts airline union elections.

The airline used company computers as voting machines and rewrote the NMB’s voting instructions, the union’s motion states. The brief also charges that Delta conditioned raises on the defeat of the union.

The Machinists (IAM), which sought to represent 30,000 ticket agents and baggage handlers, estimates that Delta spent as much as $38 million in its successful anti-union campaign. They have also appealed to the board.

When the vote was counted, those flight attendants who had a union contract immediately lost its protection. Only pilots and flight dispatchers are now organized at Delta.

The NMB calls for “laboratory conditions” from the time an employer is aware of an organizing drive until the representational dispute has been settled. Laboratory conditions have been described by board members as the conditions necessary to ensure employee free choice—free of coercion, intimidation, and influence.

As a Delta flight attendant I can personally attest to the accuracy of many of the charges mentioned in the AFA-CWA brief.

The experience began at the employee parking lot, where signs on employee buses read: “Decision 2010, you must vote to be counted.” At first this slogan doesn’t come across as intimidating or coercive, but it was just a small piece of the puzzle.

Once flight attendants arrived in the lounge, they were welcomed by managers wearing black polo shirts with the “Decision 2010” slogan. Inside, a dozen signs and posters awaited you, one banner so big it barely fit the wall. The signs gave incorrect statements about NMB decertification procedures and flight attendant pay comparisons, and said we “don’t need a third party.” The union-busting playbook was deployed full force.

WHO RAN THIS ELECTION?

Once you logged in to the company website to clock in, check your company email and schedule, or look at your paycheck, you were again bombarded.

First, a pop-up came on the screen reminding you to vote. When you clicked on the message, it didn’t simply take you to the NMB website to vote. Instead you were directed to a page dedicated to convincing flight attendants to vote no.

Daily emails from management (probably written by the union-busting law firm Ford & Harrison) were also sent to the accounts we check for important work-related information.

Delta sent a total of 11 mailers to our homes, some cleverly made to look like important employee benefit enrollment information so we would open them.

Most flight attendants also received management calls at home; some reported as many as three calls.

Surveillance on the job became so extreme that I began counting how many times management walked by when I was speaking to other employees about the benefits of union representation. In an employee lounge, a supervisor walked by 50 times in a three-hour period.

I also heard first-hand accounts from co-workers who didn’t have the courage to report incidents. These included one-on-one meetings behind closed doors about union representation and being treated differently because they were union supporters.

Delta’s response to the allegations is due December 21.

There’s some hope for a remedy: the NMB unanimously ruled earlier this year that similar tactics Delta deployed against simulator technicians required a re-run election.