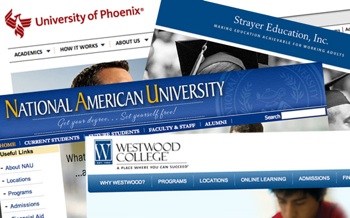 On Friday the Association of Private Sector Colleges and Universities, a for-profit school group representing 1,500 for-profit institutions, took the federal government to court to stop the Department of Education from implementing regulations designed to rein in the industry.

Reuters reports that APSCU asked the DOE to “voluntarily withdraw” three rules in particular that are slated to go live on July 1. The rules the group opposes include one that forbids schools from making use of deceptive advertising; a rule that bars for-profit schools’ admissions officers (who are really dressed up sales people) from collecting commission based on the number of students they enroll; and a third rule that requires states to okay the post-secondary schools from which students are to receive federal student loans from.

An APSCU spokesperson said that the rule barring deceptive advertising practices was too broad and would not be able to differentiate between intentional deception and inadvertent “misstatements” from employees. What is far more likely is that the industry is uninterested in reforming its business practices.

Last summer a former Westwood College admissions officer named Joshua Pruyn testified before the Senate about sales techniques that were rampant across the industry, and which upper management fully condoned. They involved understating the full cost of Westwood’s programs or only telling prospective students the cost of their programs per term and not correcting students when they assumed that the for-profit schools system operated on a standard three-term schedule like most colleges. Westwood in fact has five terms per year.

These are the things the Department of Education wants to curb, and the very sorts of “misstatements” APSCU says its sales representatives might be prone to make and therefore should not be punished for.

The most highly anticipated regulation hasn’t even arrived yet. The so-called “gainful employment” regulation could bar for-profit schools from being able to access students’ federal student loans if they sent students away with too much debt they were unable to pay. This long-awaited rule is the most controversial; more than one in four for-profit schools get 80 percent of their revenue from their students’ federal student aid money, which they can pocket even if a student doesn’t graduate from their program or complete their course of study.

The new regulations were prompted by a Government Accountability Office investigation from last year that found that fifteen out of fifteen randomly chosen for-profit school recruiters intentionally misled students about business practices and program costs. In some cases investigators who posed as students were encouraged to lie about financial aid forms or to claim extra dependents in order to qualify for more financial aid—which the school would pocket.

As if the shady business practices were not enough, for-profit schools have also gained a reputation for sending students away from programs saddled with debt that they are unable to repay. While higher education costs are increasing across the board, no matter where students enroll, students at for-profit schools in particular often graduate with much more debt—$31,190 was the median for for-profit school undergrads.