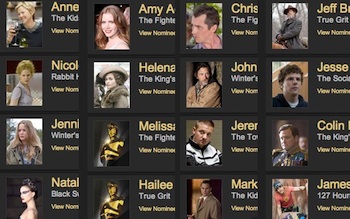 Oscar nominations are out, and this year’s list of nominees show that the entertainment industry’s most prominent awards ceremony will be the whitest it’s been in ten years. But the news begs an important question: What will it take to change Hollywood’s studios and executives?

Last September the Hollywood Reporter guessed as much when it published a story titled “Whitest Oscars in 10 years,” warning everyone that no actors of color were being considered for this year’s top prizes. This year’s awards does include one person of color, Javier Bardem from Spain who starred in “Biutiful.”

But it’s still a bit shocking, especially considering that the last year’s Oscars included many actors of color, largely thanks to “Precious.” Gabourey Sidibe and Mo’Nique were nominated as best actress and best supporting actress, with Mo’Nique taking home the prize. Geoffrey Fletcher became the first black winner of a screenplay Oscar. And Lee Daniels was the second black director ever to earn a directing nom. Morgan Freeman also picked up his fifth nomination for playing Nelson Mandela in “Invictus.”

“It’s more difficult than ever to get a picture made with any serious subject matter — let alone an ethnic-themed one,” John Singleton, an Academy member and two-time Oscar nominee for 1991’s “Boyz N the Hood,” said of the current filmmaking environment to the Hollywood Reporter.

But this issue isn’t really about the Oscars or the academy. Ultimately, it comes down to the studios and executives.

“It feels kind of circumstantial,” one member of Hollywood’s black community told the Hollywood Reporter about this year’s lack of black contenders. “Maybe you could get some studio people to address it, but then there are no black studio executives, which is another story.”

It’s been a long, arduous road for actors of color in the first place. Now it’s a matter of holding Hollywood’s power brokers accountable to their viewers.