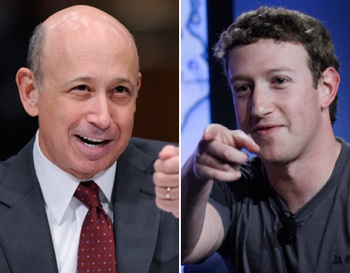 Facebook and Goldman Sachs unleashed a tech investing mania this week compared far and wide with the euphoric 1990s dot-com run-up. By arranging a $500 million private investment, at a staggering $50 billion valuation, Goldman at once delayed a Facebook public offering (now expected in 2012), prompted a likely LinkedIn IPO, and thrilled its clients, who clamored for a piece of Mark Zuckerberg’s behemoth.

But for all the nostalgia for pre-IPO “friends and family” stock in Pets.com, the dot-com era comparisons are off base. Instead, Goldman’s Facebook deal mirrors the subprime collateralized debt obligation deals that blew up entire companies, as well as crater-size hole in our economy. In fact, what Goldman just engineered might well be worse.

Let me explain. When I joined Goldman as a Managing Director in early 2000, right after the dot-com bubble burst, the hot new profit area was credit derivatives and CDOs. In fact, one of my jobs was managing a team that worked on the analytics of that business. At the time, CDOs were mostly stuffed with relatively solid high yield corporate loans and bonds, and sometimes credit default swaps. I left the firm, and banking business, in 2002, before they began recklessly stuffing subprime assets into that pipeline. No matter, as the game remained the same: get the business, rake in the fees—and pawn off the overpriced goods on the clients (even the “shitty deals” so Goldman’s not holding the bag. That dirty formula cost Goldman a $550 million fine less than six months ago.

Yet the Facebook phenomenon shows us that nothing has changed. Goldman again moved aggressively to get the business—investing $75 million into Facebook early, at a low valuation, through one of its hedge funds, in the same way it used to get CDOs rolling—again will rake in the fees (to the tune of $60 million—upfront) and again will pawn off the overvalued results to its clamoring clients, who don’t have nearly as much information as Goldman.

If you’re one of those investors, here’s the deal in a nutshell: You get to buy shares, forking over 5 percent of any possible gains, on top of a 4 percent placement fee and a 0.5 percent expense reserve fee (so you’re down 10 percent before the game starts) in a private company that doesn’t have to disclose any pertinent financial information to you or any regulator for 15 months. For the privilege, Goldman gets its eight-digit windfall.

Forget their fees for a moment, though. Recall that what killed the CDO market, aside from the crappy deals, crappy collateral and overall shadiness: lack of liquidity. Investors stopped buying CDO pieces, and trading desks stopped making markets in them. Game over. That’s why this deal, albeit in something with more potential than a basket of subprime assets, is worse than a CDO: Investor illiquidity begins on day one. The rich Goldman clients who must pony up a minimum $2 million investment aren’t allowed out until 2013. No exceptions. Ditto Facebook employees (although they were allowed to cash out about $100 million last year). But Goldman is. Whenever it wants “without notice to the fund or investors in the fund.”

CDOs were private, unregulated, overvalued, disclosure-lite, fee-intensive deals. The Facebook deal is private, unregulated, overvalued, disclosure-lite, and fee intensive. CDOs sold like mad— until they didn’t. That can happen here. At the end of the holding period, there may be no bid for Facebook shares anywhere near the price paid. Plus, by that time all the enthusiastic global users of Facebook may have dropped it for thenextgreatfad.com taking the advertiser money along with them.

The Facebook deal sucks so badly that one of Goldman Sachs’ own funds didn’t want a single share of it. Richard Friedman, who runs the money for past and present Goldman partners, among others, said, thanks, but no thanks. That should tell everyone something.

Goldman does seem to have learned one lesson. One of the problems brought up by the Abacus CDO deal that prompted the $550 million fine was the idea that Goldman was helping one client short the deal against another client. To avoid another uncomfortable SEC incident, and the nuisance of public scrutiny, they’ve put the sell possibility right out front: a disclaimer allowing them to dump their shares, or perhaps short them, at any point. Which is extra convenient, since Goldman is privy to far more information about Facebook than the people they would sell them to: insider trading in the public markets—upfront and legal here.

At that point, Goldman could bank more fees by offering its shares to everyone that couldn’t get into the deal during the first oversubscribed round. The firm is even creating a new private-equity fund, Goldman Sachs Partners Private Opportunities Fund, where investors can buy into Facebook, and Goldman will extract a different fee—a straight hedge-fund fee of 1.5 percent of invested capital and 20 percent of profits above 8 percent.

So while Facebook and CDOs would seem to have nothing in common, they share that magic Goldman intangible: timing. During the height of the subprime and toxic-asset crisis, Goldman, even better than its competitors, timed when to invest with or against clients, what to hold on its books, and when to fold. It’s doing it again. And no one seems to have learned anything from either of the last two busts.

Nomi Prins is author of It Takes a Pillage: Behind the Bonuses, Bailouts, and Backroom Deals from Washington to Wall Street (Wiley, September, 2009). Before becoming a journalist, she worked on Wall Street as a managing director at Goldman Sachs, and running the international analytics group at Bear Stearns in London.

This article was originally published on The Daily Beast.