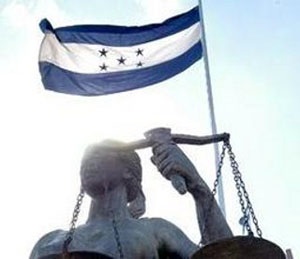 The Honduran Congress’s decision last week to allow popular referendums to amend the Constitution is nothing short of momentous given the country’s tumultous historical span of the last two years. The new measures need to be approved a second time when Congress begins a new session on Tuesday.

The significance, if not the irony, lies in the fact that many of these representatives who support these constitutional reforms opposed them when they were put forward by former President Manuel Zelaya. In total, 103 of 128 members of Congress voted to reform Article 5 of the constitution. Furthermore, they used Zelaya’s initiative for constitutional reform to justify the illegal military coup on June 28, 2008 which deposed the former president. So today’s reformers have in theory legalized consulting the sovereign citizenry on whatever it deems appropriate. At the same time they have in hindsight legitimized Pres. Zelaya’s argument that changes to unchangeable laws were needed. The difference, says the President of Congress Hernandez, is that this reform was “done legally”, after extensive consultation, whereas Zelaya’s presumably was not.

It does not matter if this claim is true. The vote was not completely unexpected and not altogether contradictory, since prior to the coup Lobo—who in June 2009 was president of the Nationalist Party—had repeatedly declared that he personally was in favor of a “constitutional consultation” on a constituent assembly. Lobo’s decision to lead his Party into the coup was widely perceived to be an act of desperate opportunism. At the time he was also the designated National Party presidential candidate for the November 2009 elections, and was seriously lagging behind Liberal Party candidate Elvin Santos. No strategy had seemed to work in his favor despite divisions amongst liberals, and he was expected to lose the national elections for a second time in a row (Zelaya had defeated him in 2005). The coup would, and in fact did, divide the Liberal Party irremediably and guaranteed Lobo a triumph.

But his triumph would prove to be bittersweet. Due mostly to the stance of South American countries, the OAS—which expelled Honduras under the coup regime—refuses to readmit the country until Lobo remedies some of the outstanding injustices the coup had generated, such as widespread acts of violence and repression against the Resistance movement and the forced exile of the deposed president and many of his more loyal collaborators. In the meantime, Honduras has become virtually ungovernable; its two principal cities have been listed amongst the ten most violent in the world, just after Kandahar. The country has also lost international credit, and the economy might have collapsed if not for U.S. foreign assistance propping it up, along with a boom in coffee prices. On the other hand, the President of Congress J. Orlando Hernandez has sustained that rather than being “the same thing Zelaya was calling for,” as most observers have argued, last week’s reform of Article 5 of the Constitution is a completely different beast. He argues, albeit unconvincingly, that in fact, it makes the Constituent Assembly to rewrite the constitution superfluous since any aspect of the constitution can now be amended through a referendum authorized by Congress. We must consider the intent behind and benefits derived from this surprising development as well as the factors that will influence its outcome.

The reasons behind the National Party’s decision (clearly an institutional one) to amend this article are largely practical. There is no need to be sanguine or naive about this. It is obvious that the party in power was aware that it needed to break the current political impasse, which has led to ingovernability and instability, along with external pressure to break the deadlock, readmit Zelaya and enter a genuine dialogue with the real opposition. Furthermore, the decision stems from the government’s realization that it must break the significant isolation which it has pretended to ignore, but which has preempted the flow of international loans and foreign direct investment. It should also be obvious at this stage that the National Party believes it has created the superficial changes necessary to prevent real, profound change from taking place. There is little idealism in all of this, but the practical considerations need not be underestimated. There is opportunism in the measure, in that it threatens to weaken the oppositional power of the Resistance by adopting its stance as legitimate, but such maneuvering is to be expected in politics. The fact that the reform is paradoxically conservative, and thus congruent with theNationalist Party’s traditional ideology, does not mean that the reformers do not believe in what they are doing or do not understand the possible consequences. The amendment has changed the rules, and opened possibilities for the Resistance, despite the intentions of its authors.

There are five major reactions to this policy shift that should be considered. The first one is to be expected: a large proportion of the political middle ground which had been left hopelessly bereft of possibilities is not opposed to the decision to reform, and view the action with some degree of relief. Most people are clearly befuddled, but sympathize with the basic idea of reform and with its avowed intent to allow participation. That is what Nationalists expected—and they got it.

However, a significant segment of the Resistance movement, a cross-section led by many of its hard-liners denounces and even deplores the reform as a token and inconsequential measure, the sole purpose of which is to “fool” the Resistance into a cooperative mood. Resistance ideologues feel betrayed and outdone. A third, predictably fierce opposition to the reform comes from the radical, quasi-fascist right embodied by the UCD (Civic Democratic Union) at the margins of the Nationalist Party, as well as by a more numerous group of politicians in the recalcitrant Liberal Party’s leadership. The right-wing of both parties tirelessly argued that the reform was “illegal” inasmuch as it contemplated possible changes to the set in stone clauses. The UCD, with its influential U.S. political and financial backers, used the local media—over which it still has great influence—to mobilize opposition. It also has increased its presence in Washington, where it has now ever more powerful congressional allies, to pressure the Obama Administration against what its members believe to be an action as criminal as they claimed Zelaya’s poll to be.

A fourth, but all-important reaction, is that of deposed President Zelaya. The former President has welcomed the amendment and called for the government to recognize the National Popular Resistance Front as its next step. He has done this despite pressure to oppose the reform from among his Resistance allies. President Zelaya percieves the reform as one of the few ways out of the country’s predicament, and though he certainly has misgivings about it, he doubtlessly sees the potential that is still there.

A critical analysis of the amendment, in context, needs to take into account the dangers and should recognize its opportunistic and partisan intent. At the same time it must also recognize there has been an opening and that opportunism has created an actual opportunity. Chomsky writes “[t]here are no magic answers, no miraculous methods to overcome the problems we face, just the familiar ones…and the kind of commitment that will persist despite the temptations of disillusionment, despite many failures and only limited successes, inspired by the hope of a brighter future.” The reform can serve as a mobilizing tool; the debate around the reformed amendment is a pedagogical necessity that should bring us closer to our goals. I am a member, though not an authorized spokesman of the Resistance, until a higher authority should determine the contrary. Opposing the reform would be unpopular and unproductive at this moment. It is necessary to prevent division within our movement and to turn our attention to the potential uses and service of the amendment. The F.N.R.P. needs no official recognition to call for a referendum for a Constituent Assembly and to demand the repeal of amnesty for human rights violators on the day the law is officially passed. And soon the Congress may be facing an even bigger challenge: a drive to collect the one hundred thousand signatures needed to call a referendum on the abolition of the Armed Forces has already been announced.