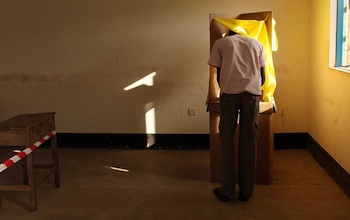 When one thinks of the South as a geographical and cultural entity in any country, it automatically conjures up a space of pleasure intertwined with pain. In the United States, for example, southern culture is infused with everything from Ludacris’ Southern Hospitality to the still divisive “southern strategy” of electoral politics. It is a place of sweltering extremities that feed on each other.

The referendum for independence in the south of Sudan, which began this weekend and will conclude on Jan. 15, is no different. Cries for freedom have been overlapping with tears of pain and separation, in a divided nation that has been gripped by civil wars since its independence in 1956.

Writing from Australia, the antipodes, the south of the south, it is an intense exercise to think of fates in another southern landmass, on the continent where I grew up. Global interest in the war-torn country initially concentrated on the region of Darfur, where almost five million people have been affected by genocide, either through death, mass migrations or disease. Coming after years of such violence, the southern Sudan independence vote is now drawing the world’s eyes, as we all watch the birth of the globe’s newest country and hope for a peaceful future.

Yet, the unasked question lingers: Beyond these benevolent global sentiments, what will be left of this newly created nation after the euphoria of independence wears off?

Geographically, Sudan is the largest landmass in Africa, at least until the results of the southern secession referendum are announced next month. Historically, it has shared the burdens of colonial division, dictatorial rulers and a whole heap of post-colonial problems. The South is considered one of the poorest regions in the world, even though it provides the majority of the country’s oil supply.

The oil deposits are in the South, but the pipelines and refineries are in the North. The Sudanese government based in Khartoum, under the tyrannical leadership of Omar Al Bashir, has managed to disenfranchise most of the vast country’s provinces through decades of political repression and naked robbery of natural resources. Since his arrival to power in 1989, civil war has become an almost daily occurrence with high estimates of two million dead. Cameroonian philosopher and political scientist Achille Mbembe called this haunting state “necropolitics.” He explains, “Death is therefore the point at which destruction, suppression, and sacrifice constitute so irreversible and radical an expenditure” that it becomes normal.

In 2005, a comprehensive peace agreement was reached in which Al Bashir conceded the South could become an autonomously governed region, through referendum for independence. Six years later, election officials in the South—operating under the watchful eyes of international observers, and even satellites organized by humanitarian organizations such Not on Our Watch—have estimated that around two million voters have registered. The sentiment of separation increases daily, and over 120,000 southern Sudanese have already migrated from the North to their ancestral homelands in the South.

U.S. political interest in the secession is more than just humanitarian concern. It offers the Obama administration an opportunity to strengthen the U.S. geopolitically against a northern regime that it has been deemed a terrorist state since 1993. It also will give the U.S. leverage against China’s increasing strategic influence in Africa. And oil, of course, is a contributing factor, with many multinational companies salivating at the profits to be made in a relatively unknown territory.

The elections have been conducted in a relatively peaceful atmosphere. But reports of 30 people being killed in cross-border skirmishes with militias in Abyei have been glossed over in the overwhelming mood of freedom. The autonomous region that acts as an oil-rich conduit between the North and South is potentially explosive. Even the ebullient George Clooney, who has for years lent his popularity to the effort to keep global attention focused on Sudan, affirms the fragility of the situation. “If you underestimate the importance of that area, all of this can fall apart,” says Clooney, “all of this joy and happiness can turn into the bloodiest war of the 21st century.”

It is fitting that Clooney invokes, albeit unknowingly, the title of one of the greatest novels ever written by an African. Chinua Achebe came to prominence in the literary world as a novelist with the publication of his magisterial “Things Fall Apart.” Translated in over 50 languages, the title is a melancholic lament of the ravages of colonialism and the breakdown of societies, taken as a line from the poet William Butler Yeats.

In a 1968 interview with Harvard University’s Transition Magazine, Achebe was asked about the struggle for independence in Nigeria’s Biafra region, his home. Achebe eloquently described a mood that could well be applied to today’s southern Sudan.

It’s a bit difficult to put it over in words. Now we’re right in the thick of the struggle and I find it difficult to explain, but one can say there is a feeling…Suddenly, this big, incredible experience happened, not just to a few people, but to millions of people together, and one cannot escape the impact of this happening to millions of people at the same time. Suddenly you realize that the only valid basis for existence is one that gives you security to you and your people. It is as simple as that. Therefore it became necessary to defend this existence you would do it.

This feeling that he describes is precisely what is being reported on now in southern Sudan, but the expected fall out after is not given much thought. The ongoing hostilities in territories such as Somalia and Eritrea, which have also seceded in recent times, are a testament to the scarred realities of secession.

It is hard to predict if stability in South Sudan will be a lasting feature, with the international community still intently observing Abyei in the coming period. What must be put forward is a democratic and, more importantly, secular polity that will be a safe haven for all Sudanese, not just southern. The repressive policies of successive Sudanese presidents and generals in the North must not be replaced with a new “southern strategy” of exclusion. The challenge is to ward off meddlesome powers and emulate the model espoused by great revolutionary African leaders such as Gamal Abdel Nasser, Kwame Nkrumah and Nelson Mandela based on justice and peace. If not, things could well fall apart.

Farid Farid is a final year doctoral candidate at the University of Western Sydney (Australia). He has been published in several journals including The Australian, The Age, The Australian Literary Review, Al Masry Al Youm and Eureka Street.