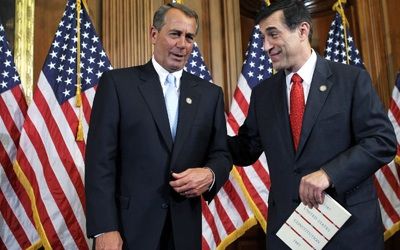 We can get used to a daily dose of hypocrisy from newly minted Speaker of the House John Boehner. Already, House Republicans have spent most of the new year hammering the two themes we can expect to hear constantly over the next two years—fiscal responsibility and reverence for the Constitution—while vowing laws that flout both principles. They’ve passed rules saying any spending bill must identify a matching budget cut, but have exempted their massively expensive (and purely theatrical) repeal of health care reform. And today, they will spend more than $1 million on the meaningless spectacle of reading the Constitution on the floor of Congress.

Vanity Fair’s Peter King said this about the stunt earlier this week:

The amount I get is nearly $1.1 million. $1,071,872.87, to be exact, though of course this is more back-of-the-envelope than exact. When one chamber of Congress is in session but not working, we the people still have to pay for members’ salaries and expenses, and for their police protection, and for keeping their lights and phones and coffee machines on. Even Eric Cantor (R-VA) and Mike Pence (R-IN) combined don’t blow enough hot air to heat the Capitol in January.

To get this estimate, I took the total FY 2011 costs for House salaries and expenses and House office buildings, then added half the costs of joint House-Senate expenses, the CBO, the Capitol Police and the Capitol power plant. Then I divided that sum by 205, the number of days the House was in session last year, then divided again by 24 (the number of hours in a day) and multiplied by 3 (the estimated length in hours of members reading the Constitution). It might not take three hours to read the document, but on the other hand, Congress is usually in session for considerably less than 205 days a year. Also, I didn’t include staff costs, since most aides will probably be working through the reading. But not all will be, so overall I think this is a conservative estimate.