Are you an urban explorer with an academic bent? Then discover Access Restricted, the Lower Manhattan Cultural Council’s popular “nomadic lecture series,” which starts up at the end of January. Entering its fourth year, this year’s installment, Lower Manhattan Revealed, will focus on downtown Manhattan and explore “significant cultural phenomena from the recent history of Lower Manhattan as well as its more deeply rooted past.”

Locations for the six-part lecture series include Pershing Hall on Governor’s Island, the former AT&T building and 7 World Trade Center. In the past, they’ve scoured restricted buildings such as the New York State Supreme Court and the Bank of New York Building, with topics ranging from intellectual property to the informal economy.

“Unbuilding New York,” part three of Lower Manhattan Revealed, will take place Feb. 9 in the Woolworth building. Michael Sorkin, principal of the Michael Sorkin Studio and distinguished professor of architecture at City College of New York, and Jeff Byles, journalist and author of Rubble: Unearthing the History of Demolition, will discuss the impact of the past decade’s building boom and bust on downtown Manhattan. All lectures are free, but a reservation is required. 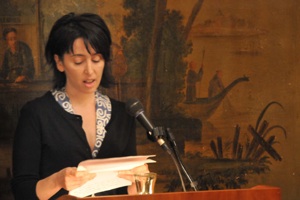 On Feb. 2, stop by powerHouse Books for the launch of Deb Olin Unferth’s Revolution: The Year I Fell in Love and Went to Join the War. Intriguing excerpts of the memoir have appeared in Harper’s Magazine and The Believer. Expect a breathless rendition of the year she ran away from college with her boyfriend and followed him to Nicaragua to join the Sandinistas. Believer co-editor Heidi Julavits joins Unferth for a discussion of her experience.

Also on Feb. 2, the collaborative learning project Trade School will reopen for its second year in downtown Manhattan. Initially a pop-up storefront that sprung out of the barter network OurGoods, Trade School offers a series of classes that you don’t have to pay for (not in cash, at least). Instead, the individual teachers list items they need or want as the price of admission. A random sampling of classes from last year includes “How To Throw an Arts Festival for 1-3 days,” “Grant Writing,” and “Grassroots Community Organizing Basics.” Some items requested by the teachers: wool socks, a one-and-a-half-hour German lesson, small drill bits and vegetarian recipes. Food is very popular, both as a class topic and an object of barter. 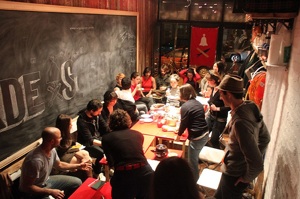 When it first opened for one month in February 2009, Trade School turned out to be so popular that many classes were filled to capacity. In response, the organizers extended the session; this year’s Trade School will be open from Feb. 2 to April 17 (and possibly longer if they’re able to raise additional rent money).

“I’m excited to see what New Yorkers are enthusiastic about right now,” Caroline Woolard, one of the group’s five founders, told me, in an email, “We hope to bring in more people who might continue the project in years to come.”

Woolard hopes that Trade School could become a long-term, even permanent project — either by opening yearly, or eventually staying open year-round.

For information on Access Restricted and to reserve a spot, visit lmcc.net/cultural_programs/access_restricted.

The Powerhouse Arena is located at 37 Main St, Brooklyn. Call 718-666-3049 or visit powerhousearena.com/events.

Trade School will be located at 32 Prince St, New York. Visit tradeschool.ourgoods.org to peruse last year’s classes and to sign up to take — or teach — a class.