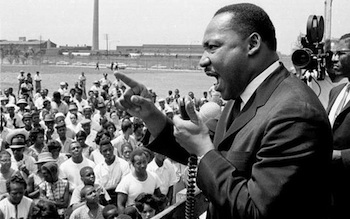 I speak as a citizen of the world, for the world as it stands aghast at the path we have taken. I speak as one who loves America, to the leaders of our own nation: The great initiative in this war is ours; the initiative to stop it must be ours.

When Martin Luther King, Jr. “broke the silence” on the war on Vietnam in 1967, he shattered the establishment rhetoric on America’s mission in Southeast Asia. His speech, “Beyond Vietnam: Time to Break the Silence,” delivered at Riverside Church in upper Manhattan, still has revolutionary ring to it as we approach MLK Day more than 40 years later.

Taking a politically risky and unpopular stance—and bucking the advice of some of his most trusted advisors—King drew a link between the destruction of war in Vietnam and the devastation of America’s stratified society. He framed the independence struggle of the Vietnamese as the freedom struggle of communities of color at home.

Civil rights advocates who had preceded King had often bound up patriotism with ideas of racial uplift—for instance, in the Double V campaign of World War II. But King recognized the cancerous injustice of the Vietnam War:

If America’s soul becomes totally poisoned, part of the autopsy must read “Vietnam.” It can never be saved so long as it destroys the deepest hopes of men the world over.

Today, antiwar activism is much more entwined with movements for human rights and racial justice, thanks in large part to King’s prescience. But the march of war continues to trample souls, in distant battlefields and on blighted American streets. And some activists fear the antiwar movement has waned since the 2008 election, which drained momentum from the opposition that flourished under the Bush administration and left some groups less willing to challenge a presidency hailed as a civil rights victory to itself.

In the coming days, grassroots groups around the country will remember King’s stance on the war and take stock of how much, or how little, the country has progressed since King first broke his silence.

In New York City, Iraq Veterans against the War will bring together community members in the Bronx for a reading of King’s speech. IVAW organizer and Iraq veteran Andrew Johnson said that this time, the silence may be harder to penetrate:

The mobilization of the American people against the wars in Iraq and Afghanistan might be more difficult than against Vietnam. Casualties are lower, of course. Also, there is no draft, which allows most of the American public to ignore the problem without facing such a direct impact as a loved one being drafted. Most major news outlets do not offer serious reports about the wars…. It is important to get messages like those from “Beyond Vietnam,” but it is hard to do in a climate of apathy.

When King told his audience, “The bombs in Vietnam explode at home,” he inverted the prevailing notion that the price of national security would be borne solely by the country we designated as the enemy. He was advancing a globalization of the civil rights movement that was already underway. As historian Mary Dudziak has pointed out, “Third World” activists, embroiled in their on post-war, anti-colonial liberation movements, had watched the protests in Birmingham closely, seeking inspiration and a platform to challenge Washington’s hypocrisy.

King feared that eventually humankind’s capacity to self-destruct would grow faster than its capacity for compassion. Literary scholar David Bromwich wrote that King’s perspective on modern warfare was shaped by the fact that as technology evolved, “Things built over ages can be made to vanish in an instant under its annihilating stroke. That is what happened to the ancient culture, the farms, and the forests of Vietnam under the unleashed assault of American air power.” The methods of war are increasingly mechanized today, enabling an unmanned drone to destroy instantly an enemy on the ground, or the unfortunate civilians and children caught in the crosshairs.

Violence has a perverse way of reconfiguring social divides and loyalties, King noted:

So we have been repeatedly faced with the cruel irony of watching Negro and white boys on TV screens as they kill and die together for a nation that has been unable to seat them together in the same schools. So we watch them in brutal solidarity burning the huts of a poor village, but we realize that they would never live on the same block in Detroit. I could not be silent in the face of such cruel manipulation of the poor.

Tragically, the commemorations of King this year come just days after the shootings in Arizona exposed the violence poisoning the country’s political arena. The senselessness of the carnage bears out King’s imagery of “a society gone mad on war,” caught in a spiral of militarization that yielded only “might without morality, and strength without sight.”

You change Vietnam to Iraq or you change Vietnam to Afghanistan, and you have the most powerful speech you can hear about why the wars that we’re engaged in are wrong, how they are wars against people of color, how they are racist wars, how we don’t care about our own soldiers—people who are struggling here at home just to get a job or an education, whom we’re sending overseas to kill poor people. Unfortunately, it’s not so much an echo of the past; it’s a clarion call to the present.

There is a Martin Luther King, Jr., that we may not recognize from elementary school textbooks, the human rights activist who has galvanized generations of resistance movements from the Horn of Africa to death row. Though many of his successors have taken a more radical tone or diverged from the nonviolent tactics he promoted, his message against war endures. That’s why some Pan-Africanist commentary on southern Sudan’s independence referendum this month invoked the preacher’s words. And Hugo Chavez, proud foe of American hegemony, recently hailed King as a martyr.

A statement commemorating King from the New York-based Pakistan Solidarity Network frames “Beyond Vietnam” as an essentially anti-imperialist critique:

As King urged, we must imagine our work holistically, because the imperial project we are resisting does not obey any boundary: the “War on Terror” has created a social, legal, and economic reality that is destroying countless people of color and migrants at home and world-round.

Yet King’s words are subject to distortion as well. His comments on Zionism, for instance, have been repackaged to bolster Israeli aggression in the occupied territories. His early death left open the challenge of interpreting and internalizing his legacy.

If Dr King had not been assassinated, but had lived to become an old radical activist constantly questioning American policy, I suspect he would never have become so venerated. It is better for a country to have heroes who are dead, because they cannot make embarrassing statements opposing continuing injustice and unnecessary wars.

King was in fact considered an unwelcome troublemaker for most of his short life. The anti-war and antipoverty politics he’d begun to put at the forefront of his activism had drawn increasingly unflattering commentary in the run up to his assassination. We can celebrate that he lived long enough to further a legacy of antiwar activism rooted in racial justice.

This year, the Fellowship of Reconciliation, an interfaith peace organization historically tied to the civil rights movement that now campaigns on every continent, draws inspiration from King’s “Beyond Vietnam” speech in its new campaign, “Demilitarization of Life & Land.”

Focusing on the Middle East and Latin America, the group’s mission statement centers on “Resisting the militarization of territory (high schools, farm lands, military bases, whole nations) and of our bodies (through military recruitment, weapons sales, threats and acts of war),” and campaigning for “peaceful relations through grassroots diplomacy, protective accompaniment of threatened communities, and a federal budget with new priorities.”

At the annual King Peace Program at the King Center in Atlanta today, coordinated by the American Friends Service Committee, community members are revisiting King’s Vietnam speech as a touchstone for contemplating today’s peace movement. Timothy Franzen, a program director with AFSC-Atlanta, pointed to “the striking connections between a bloated military budget, a broken domestic economy, and the institutional racism we see in our schools and communities.”

The financing of war at the expense of “programs for social uplift,” Franzen said, “has created a situation where low-income youth often get caught up in two of our country’s most destructive systems of violence and oppression, the military and prison industrial systems. Both thrive on tax dollars, racial inequity, and the constant production of enough fear to garner unquestioning support [from] the general public.”

When participants in today’s event read from King’s speech, their words will outline the same vision impressed on the audience at Riverside Church in 1967. When he looked “Beyond Vietnam,” King imagined transcendence and convergence: the weaving together of struggles that we’ve always been taught to keep separate, to form “a single garment of destiny.