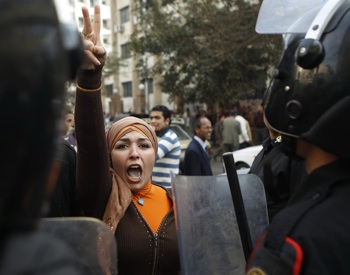 This article was originally published on CommonDreams.org from Al Jazeera English.

Egyptian protesters have called for a massive demonstration on Tuesday in a bid to force out president Hosni Mubarak from power.

The so-called April 6 Movement said it plans to have more than a million people on the streets of the capital Cairo, as anti-government sentiment reaches a fever pitch.

Several hundred demonstrators remained camped out in Tahrir Square in central Cairo overnight, defying a curfew that has been extended by the army.

Thousands were back on the square by mid-day on Monday, chanting anti-government slogans. This as heavy military presence was seen in many parts of the capital.

One of Al Jazeera’s correspondents said the military’s attempts to block access to the square on Monday by closing roads was not working as more people were arriving in a steady stream.

“Protesters say they’ll stay in this square for as long as Mubarak stays in power,” she said.

Protesters seem unfazed by Mubarak’s pledge to institute economic and political reforms. Our correspondent said people feel that such pledges “are too little, too late”.

The newly appointed prime minister of Egypt, Ahmed Shafiq, has formed his cabinet, in which Mahmoud Wagdy has been appointed to lead the crucial interior ministry, responsible for the police.

Wagdy was previously head of Cairo criminal investigations department and also a former head of prisons.

Al Jazeera reporters in Cairo also said police had been seen returning to the streets, directing traffic, after being absent since Friday.

“We are waiting for the minister of interior to announce in what form they are going to come back onto the streets and why they disappeared after Friday prayers, on the ‘second day of rage’,” one correspondent said.

“The absence of police has given looters a free rein, forcing ordinary citizens to set up neighbourhood patrols. Many people are wondering where the police disappeared to.

“There are two schools of thought as far as the police are concerned: One is that many of them decided to join the protesters. The other is that the regime was saying to the people, ‘You want to protest. We’ll pull back the police and you feel what anarchy feels like’,” our correspondent said.

After deadly clashes in which more than a hundred people were killed in Cairo and other cities, protesters complained that police were using excessive force.

But an Al Jazeera correspondent said some locals greeted police as “long-lost friends” on Monday.

“It’s almost as if the population of Cairo is suffering from selective amnesia … We saw one small boy carrying a tray a of tea to a group of policemen. Another man got out of his car, kissed and hugged the policemen.”

Meanwhile, many people are stocking up on bottled water and food, one of Al Jazeera’s correspondents in Cairo said.

“I walked into a supermarket and saw complete mayhem. People are stocking up on supplies as much as they can. There are very few rations available in the stores. They are running out of basic supplies, like eggs, cheese and meat. Deliveries have not been coming for days.”

The former head of the International Atomic Energy Agency told the crowd on Sunday night that “what we have begun cannot go back” referring to days of anti-government protests.

The National Coalition for Change, which groups several opposition movements including the Muslim Brotherhood, wants ElBaradei to negotiate with the Mubarak government.

“The people want the regime to fall,” protesters chanted as ElBaradei walked to the centre of the square, holding hands with some demonstrators.

The show of continued defiance by the people came on a day when air force fighter planes flew low over Cairo along with helicopters and extra troop lorries appeared in the central square.

As the protests continue, security is said to be deteriorating and reports have emerged of several prisons across the country being attacked and of fresh protests being staged in cities like Alexandria and Suez.

Thirty-four leaders from the Muslim Brotherhood were freed from the Wadi Natroun jail after guards abandoned their posts.

The protesters in Cairo, joined by hundreds of judges, had gathered earlier in Tahrir Square in the afternoon to demand the resignation of Mubarak.

Al Jazeera’s correspondent, reporting from the scene, said that demonstrators confronted a fire truck, at which point army troops fired into the air in a bid to disperse them.

He said the protesters did not move back, and a tank commander then ordered the fire truck to leave. When the truck moved away from the square, the thousands of protesters erupted into applause and climbed onto the tank in celebration, hugging soldiers.

Main roads in Cairo have been blocked by military tanks and armoured personnel carriers, and large numbers of army personnel have been seen in other cities as well.

Our correspondent said that extra military roadblocks had been set up in an apparent attempt to divert traffic away from Tahrir Square, which has become a focal point for demonstrators.

“It’s still a very tense scene to have so much military in the capital city of the country.”