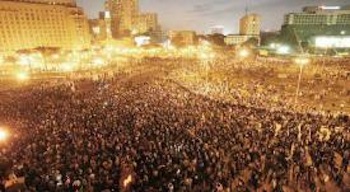 CAIRO – Egyptians have demonstrated in protests rare in size and ferocity against the three-decade rule of Egyptian President Hosni Mubarak.

“Down, Down with Mubarak,” thousands chanted in downtown Cairo Tuesday. “Mubarak, it is your turn after Ben Ali,” they said referring to Zine El Abidine Ben Ali who was topped Jan. 14 in protests in neighbouring Tunisia.

The protests saw factory workers, university professors, political activists, and people from all walks of life, both men and women, braving riot police and taking to the streets across the country – not just in capital Cairo.

Many were also chanting against corruption, unemployment and the regime of the 82-year-old Western-backed President Hosni Mubarak who has ruled the country since 1981 with an iron fist.

The call for the protests came first by young Internet-savvy activists who declared Jan. 25 a ‘day of rage’ on Facebook pages and on Twitter. Interior Minister Habib El-Adly first dismissed the call as ineffective but the numbers that turned out stunned the police. As the day progressed what was initially expected to be yet another day of small protests in Cairo that the police could easily crush evolved into massive unrest in almost all major towns and cities in the Arab nation of 85 million.

Protests broke out at different locations in Cairo, confusing the police further. A nearby demonstration in downtown Cairo targeted the high court while another took place in the affluent district Mohandseen. A third came in the industrial neighbourhood Shobra.

Later in the day the police, clearly surprised by the growing numbers of people, started firing tear gas and using water canons. Riot police blocked all entries to downtown Cairo with armored vehicles. Cars were stopped at check-points, and some passengers were forced out of their cars by the police.

Protesters sat through the cold night in Midan Al-Tahrir, the Liberation Square, Cairo’s most central area. The Interior Ministry has issued an ultimatum for them to disperse. Local TV stations are broadcasting the warning non-stop.

The government, which controls all communications here, started blocking websites in the afternoon as events on the ground heated up and it became clear that many protesters were using the Internet for information.

Aldostor.org, the website of the privately owned newspaper which often carries articles by opponents of the regime, was blocked. Alwafd.org, a website for the opposition daily Alwafd, was also blocked after it reported the death of one protester. Twitter has been blocked for hours. Demonstrators are using mobile phones to coordinate their activities.

Industrial city Al Mahala saw some of the biggest demonstrations. A young protester there told IPS over the phone that “thousands” were taking part.

“It is like the entire city is out,” 30-year Doaa Abdulla said. “I woke up my husband and encouraged him to take part. There were so many people pushing and running around. He fell on the ground and hurt himself but he still wants to continue protesting.”

She said she only left after she heard live shots from the police. “It sounded like bullets. I think they have orders to shoot and kill,” she said over the phone from Al-Mahala.

“We heard of the protests on Facebook,” said a 15-year-old protester who identified herself as Mona.

Riots have been reported in several cities including Alexandria, Tanta, Mahala, Suez and Mansoura, and in some parts of Sinai.

The local privately-owned Al-Mehwar TV station reported that the only areas that didn’t see protests were remote cities such as Luxor, Aswan and the distant western desert city Al-Wadi Al-Gadeed.

Protestors are asking for a rise in the minimum wage, unemployment benefits, an end to marital law, release of political prisoners, and constitutional changes that would bar handing over power to any of the president’s family. Mubarak is widely believed to be grooming his son Gamal to take over the presidency.

“After today, the options before the political leadership in the country have become very limited,” Mahmoud Sultan, a columnist with the independent newspaper Almesryoon told IPS.

“The country looked today like it’s going through a historical turn that could change more than a quarter century of injustice, repression and starvation. Egypt will never be the same after Jan. 25.”

This article was originally published by the Inter Press Service.