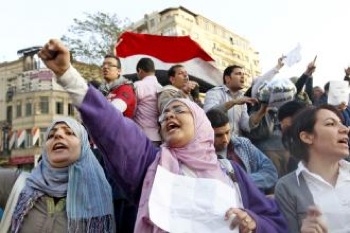 Egyptian politics are on a knife’s edge as the popular uprising in that country has put the question of revolution at the center of world politics.

As Monday dawned over Cairo’s Tahrir (Liberation) Square, thousands of protesters mingled with tanks and armored vehicles of the armed forces that may either be won over the demonstrators’ demand to oust President Hosni Mubarak–or carry out the dictator’s order to repress a widespread popular revolt.

The fact that Mubarak has been forced to rely on an army of uncertain loyalty highlights the profound changes in Egyptian society since the mass protest of January 25. Suddenly, one of the most feared and effective police states in the world is on the brink of collapse, as millions shake off their intimidation and take to the streets across the country.

The working class may soon make its social power felt if a call for a general strike on Tuesday can be heard despite the government’s disruption of Internet and mobile phone networks.

The dynamics of Egypt’s rebellion recalls the classic revolutionary movements of the 20th century. Working people are withstanding assaults by a vicious security force, but continue to assert their rights–and, as so many in the streets told reporters, their dignity.

Beyond the great mobilizations in Tahrir Square, working people fought–and won–pitched battles with police in the cities of Alexandria and Suez. Back in Cairo, protestors managed to burn down the political center of the regime, the headquarters of the ruling National Democratic Party.

Now the role of the armed forces is the central question. The army’s ambiguous behavior was on display in Tahrir Square on Sunday, as U.S.-built fighter jets ominously buzzed the tens of thousands of protesters in the square. Tanks and other army vehicles have taken key positions at key access points to Tahrir Square, according to the Al Jazeera news network.

At the same time, however, demonstrators continued to fraternize with soldiers, with many tank commanders allowing anti-Mubarak graffiti and signs to be placed on their tanks or even use the as platforms to address the crowd.

Nevertheless, the increasing presence of the army is a sign that Mubarak and his reshuffled leadership are counting on the military as a last bulwark to remain in power–if not to keep Mubarak in office, then to preserve as much of his state apparatus as possible in the face of the massive upsurge that began with the January 25 protest and led to days of protests and clashes with the hated police.

When the police repression–including the use of live ammunition that left more than 100 dead–failed to stop the demonstrators, the regime pulled them from the streets and, apparently, unleashed them as looters. Popular neighborhood defense committees across the country reported that they apprehended thieves who were carrying police IDs.

The regime’s strategy was evidently to maximize social tensions and allow the army to play the role of patriotic savior of the nation from chaos.

But rather than intimidate the population, the state-sponsored looting has sparked working people to form popular neighborhood organization to ensure security, including the establishment of checkpoints and the apprehension of thieves–a dramatic sign of the confidence and development of the rebellion.

If Mubarak is still clinging to power, it’s in part because the U.S. government that backed him for decades has been timid in its criticism, even now that rebellion has broken out in the streets of Egypt.

Vice President Joe Biden set the tone when he refused in a January 27 television interview to admit that Mubarak was a dictator. Tortured statements from President Barack Obama and Secretary of State Hillary Clinton call for democratic reforms–but with the aim of avoiding a revolution that could sweep away their most important client state in the Middle East.

Like Mubarak, Obama wants to keep in power as much of Egypt’s military brass and political elite as possible. Egypt, after all, has a peace treaty with Israel–the U.S.’s main ally in the region–and functions as Israel’s de facto ally in keeping the Palestinians in Gaza on starvation rations. The loss of Egypt as an ally would have an incalculable–and negative–impact on U.S. foreign policy in the Middle East and beyond.

The U.S. has apparently concluded that it’s impossible to keep Mubarak in power indefinitely. But rather than see him swept out by a popular revolt, Washington wants a more orderly transition–one that at least keeps the U.S.’s closest allies in the mix. The call by the British, French and German governments for free elections in Egypt was a signal that other Western governments are maneuvering to be on the good side of whatever government does emerge. Since the European powers don’t have as much stake in Mubarak’s clique as the U.S. does, they’re prepared to bet on a different regime.

With Western foreign policy in flux, Mohamed ElBaradei has presented himself as head of the opposition.

ElBaradei, the former top nuclear inspector for the United Nations, has been a critic of Mubarak, and was seen as a possible candidate for the upcoming presidential elections. However, he’s lacked much of a base and continued to live in Vienna before flying home to belatedly join the protests.

ElBaradei acquired some credibility by being placed under house arrest. But in a signal that some in the military–or in Washington–are prepared to use him as a moderate figure who can channel revolutionary energies into a safer direction, ElBaradei was allowed to go to Tahrir Square on January 30. There, he announced that he was prepared to head a transitional government–and both liberal groups and the Muslim Brotherhood declared they supported ElBaradei’s efforts.

For the U.S., the participation of the Muslim Brotherhood–long repressed by the regime and demonized under the guise of the U.S. “war on terror”–is a lesser evil compared to a revolution that could sweep away Egypt’s national security apparatus.

But the Muslim Brotherhood is in fact a conservative middle class movement that refrained from joining the recent rebellion until the pressure of events compelled it to do so. Rather than confront Mubarak’s state, the Muslim Brotherhood has tried to institutionalize itself through professional associations and charity organizations. Banned from open existence, it has been able to elect some members of parliament until last year’s vote were so rigged that it was completely excluded.

For now, given the lack of a forceful push from the U.S., Mubarak is seeking to fortify his position by appointing Omar Suleiman, the country’s former top spy and an ex-general, as vice president, a post that has been vacant for 30 years, as part of broader reorganization of the government. But by picking someone so identified with his regime–and failing to concede an inch on political reforms and free elections–Mubarak has succeeded only in getting the protesters to include Suleiman’s ouster as part of their demands.

Meanwhile, Mubarak is also trying to drive a wedge of social class into the protest movement, which so far has involved a broad spectrum of Egyptian society–virtually everyone other than the superrich who benefited directly from the regime.

In public announcements January 30, Mubarak called for job creation and for food prices to remain subsidized by the government–economic initiatives designed to appeal to the poor and the working class and draw them away from the middle class leaders of the pro-democracy movement. With nearly half of Egypt’s population of 80 million living on less than $2 per day, the regime desperately hopes to forestall revolution with a bit more bread.

But it’s too late for that. As in the uprising in Tunisia that provided the inspiration for Egypt’s own rebellion, economic conditions underpin the movement.

Inflation in food prices have left workers and the poor facing the threat of malnutrition while Egypt’s wealthy live in luxury on par with the elite in any Western country. Most important, the Egyptian working class has in the last five years undergone a revival of struggle, carrying out several successful strikes, most importantly in the textile industry city of Mahalla. These economic struggles set the stage for the political protest that burst into the open January 25.

The question now is whether the political struggle for democracy and the ouster of Mubarak will flow back into the economic demands of workers. That is the perspective of the socialist activists who have tried to forge links between the new workers movements and the pro-democracy efforts that had been–prior to the uprising in Tunisia–led by middle class reformers with a small social base.The movement for democracy has become a vast popular struggle. But it needs the social weight and political organization of the working class–not only to make it impossible for Mubarak to stay, but also to carry on the struggle against his cronies and the corrupt business interests that constitute the core of his regime.

Certainly, the downfall of a hated dictator would be a fantastic achievement by the Egyptian working class. But transforming the miserable conditions of Egyptian workers–and sweeping aside the ruling class that created and protected Mubarak–will take sustained struggle and the revival of independent working-class organization and politics.

In the near term, deepening the struggle will depend in large part on whether the mass of people in the streets can win over the soldiers to their side. On one side, Mubarak, Suleiman and the generals ready to replace them hope that the armed forces, while not able to crush the mass movement in the near term, can slowly squeeze and exhaust it.

Yet the longer the soldiers are on the streets to fraternize with protesters, the greater the risk that the armed forces won’t do the bidding of the top military brass. There is a gulf between the low-level officer earning around $200 per month and the generals who have grown rich from corruption, kickbacks from military contractors and the army’s extensive business interests.

In short, the movement must make an appeal to the soldiers on the basis of working class solidarity in order to neutralize the threat of repression. As the Russian revolutionary Leon Trotsky wrote, the army is “a copy of society, and suffers from all its diseases, usually at a higher temperature. The hierarchy of command in capitalist society is reflected in a more extreme form in its armed forces. The officer castes keep in close touch with the capitalists.”

But even with a regime as isolated as Mubarak’s, there is no guarantee that rank-and-file soldiers will take the risk of disobeying their officers and refuse orders to shoot the people. They have to be confident that the revolution has a place for them, and that it can succeed–and so the appeals to them have to be organized.

A display of workers power–in the form of a general strike–would, of course, give greater impetus to the effort to win over the soldiers.

What happens next depends on the efforts of the Egyptian working class. Through their courage and action, they’ve already shaken one of the world’s nastier authoritarian states to its foundations and destabilized U.S. imperialism in the Middle East. Their actions will inspire further struggles to come.