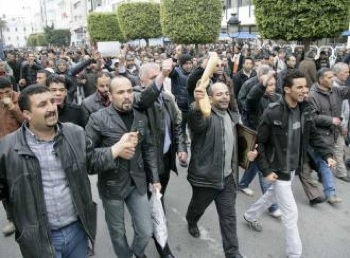 Popular upheavals always carry a distinct sonic resonance. The cascading chants that reverberate through the streets, the roar of the crowd as it drives back the riot police and seizes the city square – all this and more produces an unmistakable acoustic effect. The rhythm of revolt pulsates through society, freedom music fills the air.Ruminating about this as I watched rebellion flow from Tunisia to Algeria, Jordan and beyond, I was brought back to Dizzy Gillespie’s jazz anthem, Night in Tunisia. Gillespie’s tune emerged as part of a musical upheaval known as the bebop revolution. And its unique blend of Afro-Cuban rhythms and bebop idioms makes it an early experiment in “world music,” a border-crossing mixing of genres. And so it has been with the freedom music emanating from Tunisia. It too is hopping boundaries and echoing far and wide.

“The street has spoken,” is how one Tunisian protestor puts it. Indeed it has. And it shows no sign that it is about to stop its raucous agitation.

Riding a noisy wave of mobilizations, riots and strikes, on January 14 the people of Tunisia toppled the 23-year-long dictatorship of President Zine al-Abidine Ben Ali, sending their former head of state into exile and recording the first great popular victory of the new year.

What’s more, the voices of the street are growing louder, echoing across Algeria, Jordan and beyond in a wave of popular protest directly linked to the world economic crisis.

It is vital to insist on this last aspect of events – their connection to the global slump. Not only is this link especially ominous for the powerful and privileged of the world, foreshadowing revolts to come; it is also critical to countering the narrative running through the western press that Tunisia’s revolt is a product of corruption unique to politics in the Arab world.

The claim is a convenient mystification. For the Tunisian revolt grows out of the dialectic of the local and the global.

In many respects, the point is obvious. Tunisia’s riots and demonstrations began as a direct outburst of anger over unemployment and rising food prices. The spark was a police attack on a university-educated street vendor, Mohammed Bouazizi, on December 17 in the central town of Sidi Bouzid. Claiming Bouazizi did not have a permit, police confiscated his goods and assaulted him.

In and of itself, it was an ordinary event in the life of a poor man. But what came next was anything but ordinary. Using his remaining funds, the street vendor bought gasoline, marched to city hall, doused his clothing and set himself ablaze. He died in hospital less than three weeks later.

“WE WILL AVENGE YOU”

In a country where the official jobless rate is 14 per cent and the real rate, especially for the young, is considerably higher, this dramatic episode became a lightning rod for popular discontent. Daily protests erupted immediately after Bouazizi’s desperate act, spreading to cities and towns across the country. Unemployed teachers, bus drivers, high school students and street vendors joined the mobilizations. As the movement gained momentum, demonstrators became increasingly confident, torching police cars and trashing businesses linked to President Ben Ali and his family. Then, following Bouazizi’s death, marchers at his funeral filled the air with chants of “Farewell, Mohammed, we will avenge you. We weep for you today; we will make those who caused your death weep.” They more than made good on the pledge.

By this point, the protests had taken on an explicitly political character. Unemployment and food prices remained key issues, but the movement was now directly attacking the president and his government.

Ben Ali reacted with the tools that had worked for 23 years: a ban on demonstrations; arrests of leftists and trade union leaders; tear gas, truncheons and guns; police repression, including the killing of at least 66 protestors. But none of this was able to break the protests. Not only was the movement growing in size and militancy, but working class organizations were coming to life.

Trade unions, quiescent for years and their leaders initially hesitant to join the struggle, became key hubs of resistance thanks to pressure by rank and file members. Spurred into action and radicalized by events, the General Union of Tunisian Workers Days began organizing rallies and launched a general strike. It is difficult to overstate the potential significance of these developments. A revitalized trade unionism is critical to the development of the movement in the months ahead. If union activism surges forward and makes common cause with students, street vendors and the unemployed, the insurgency could acquire a vital organizational forum and an increasingly working class character. Moreover, an emboldened and dynamic workers’ movement might undercut the demobilizing effects of backroom deals between the old regime and moderate opposition parties.

Equally important will be the degree to which the insurgent wave continues to flow across borders.

In the early days of January, riots broke out in Algeria in response to announced increases in prices for food and other staples. Railway workers struck, as did students at five universities. Clearly emboldened by events in neighbouring Tunisia, demonstrators attacked banks, police stations and government offices. Police violence and mass arrests – at least 1,000 people were detained – failed to dent the movement. As in Tunisia, the struggle moved to a higher level as unions and student groups came together demanding democratization and an end to police violence. In a desperate effort to stave off a Tunisian scenario, Algeria’s government back-tracked, declaring a 41 per cent cut to taxes on food.

Yet the spirit of rebellion did not rest. One day after Tunisia’s president was toppled, mass demonstrations erupted in Jordan on January 15, as thousands of people poured through the streets of Amman, the capital, and other cities to protest rising food prices and to demand the government`s resignation. Dubbed “Jordan’s Days of Rage,” the protests included a sit-in outside parliament by the country’s 14 trade unions.

Two days after the start of the Jordanian demonstrations, a new round of food riots broke out in northern Sudan, where the government is pushing up prices by lifting subsidies on food and petroleum.

This escalating insurgency has clearly shaken the regions rulers. The Arab News warned for instance that “Those who see these disturbances as a local North African difficulty should think again. The hopelessness that drove this young Tunisian to his death, that has prompted several thousand of his compatriots to do the rare thing for Tunisia – take to the streets and riot – and that has seen young Algerians looting and rioting this week against price rises are a breakdown in law and order that was waiting to happen. It can happen elsewhere in the Arab world. It is not just in North Africa that the specter of unemployment looms.”

This is all true. There are indeed reasons specific to the region and the regimes involved that make these states particularly susceptible to rapid outbreaks of mass opposition. But in the West, this has given rise to a colonialist discourse that attributes all ills to the demonstrable brutality of corrupt regimes. This conveniently ignores the direct role of states like the U.S. and France in propping up and supporting Ben Ali’s dictatorship for more than two decades. It also ignores the way in which these are local expressions of revolt linked to global economic issues.

FOOD AND THE GLOBAL SLUMP

For the massive spike in food prices is directly connected to the turmoil in the world economy that has been raging since the outbreak of the financial crisis of 2008.

The first effect of the global economic slump was to dampen rising food prices. As layoffs and unemployment soared, demand slumped and food prices came down. But now, as the crisis changes form, they are on the rise once again and reaching unprecedented heights. Indeed, the UN’s Food and Agriculture Organization’s food price index has reached an all-time high, having risen a staggering 32 per cent in the last half of 2010. Food is now more expensive than ever, aggravating economic hardship across the Global South and throwing fuel on the fire of popular resentment.

One part of the story here has to do with new flows of “hot money” generated by the world-wide bank bailouts and economic stimulus programs. As banks melted down and the world financial system teetered in 2008-9, governments in the dominant capitalist nations poured something in the range of $20 trillion into propping up the system and pushed down interest rates. In the U.S. a further $600 billion is being injected into the system by the Federal Reserve.

With a growing money supply and record low interest rates, there is a huge incentive for investors and speculators to borrow on the cheap in order to buy commodities (and currencies) that look likely to appreciate. So, currencies like the Brazilian real have been soaring, as have prices for basic commodities like food and oil.

All of this is driving forward a wave  of land grabs, particularly in Africa and Latin America, as global corporations and governments, like China’s, buy and lease millions of hectares of arable, drillable and water and mineral rich land. The result is yet further waves of accumulation by dispossession, to use David Harvey’s term, that displace indigenous peoples, peasants and farmers and deprive them of means of feeding themselves, thus exacerbating problems of displacement, hunger and poverty.

Add into the equation two further factors – the increasing use of arable land for the production of biofuels rather than food, and speculation by investors gambling that a poor Russian harvest or floods in Australia will damage food supplies and further drive up prices – and we have all the ingredients for huge price spikes and a new world food crisis. These are yet further ingredients for popular revolt.

This is why protests (some of them being manipulated by opportunists of the Right) are also building in India, where prices are soaring at a rate of more than 18 per cent – this in a country where the World Bank says 828 million live on less than $2 a day. In short, we are not dealing with a problem specific to the Arab world, even if movements there more readily become a direct challenge to authoritarian regimes. No, the problem has deep roots in the global economic system and the particular forms of its current crisis.

In my last blog I wrote that I would soon take up the question of resistance to the politics of austerity that characterize this period of global slump (“Like we said, it’s a global slump,” here. But the insurgents of Tunisia and beyond have beaten me to it. They are showing far better than any blogger what can be accomplished by spirited mass insurgency and revived working class activism.

David McNally teaches political science at York University, Toronto and is the author of the recently published book, Global Slump: The Economics and Politics of Crisis and Resistance (here).

This article was originally published on PMPress.org.