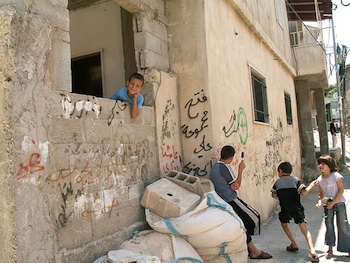 For more than a decade, since the collapse of the Camp David talks in 2000, the mantra of Israeli politics has been the same: “There is no Palestinian partner for peace.”

This week, the first of hundreds of leaked confidential Palestinian documents confirmed the suspicions of a growing number of observers that the rejectionists in the peace process are to be found on the Israeli, not Palestinian, side.

Some of the most revealing papers, jointly released by AlJazeera television and Britain’s Guardian newspaper, date from 2008, a relatively hopeful period in recent negotiations between Israel and the Palestinians.

At the time, Ehud Olmert was Israel’s prime minister and had publicly committed himself to pursuing an agreement on Palestinian statehood. He was backed by the United States administration of George W. Bush, which had revived the peace process in late 2007 by hosting the Annapolis conference.

In those favorable circumstances, the papers show, Israel spurned a set of major concessions the Palestinian negotiating team offered over the following months on the most sensitive issues in the talks.

Mahmoud Abbas, the Palestinian Authority president, has tried unconvincingly to deny the documents’ veracity, but has not been helped by the failure of Israeli officials to come to his aid.

According to the documents, the most significant Palestinian compromise — or “sell-out,” as many Palestinians are calling it — was on Jerusalem.

During a series of meetings over the summer of 2008, Palestinian negotiators agreed to Israel’s annexation of large swaths of East Jerusalem, including all but one of the city’s Jewish settlements and parts of the Old City itself.

It is difficult to imagine how the resulting patchwork of Palestinian enclaves in East Jerusalem, surrounded by Jewish settlements, could ever have functioned as the capital of the new state of Palestine.

At the earlier Camp David talks, according to official Israeli documents leaked to the Haaretz daily in 2008, Israel had proposed something very similar in Jerusalem: Palestinian control over what were then termed territorial “bubbles.”

In the later talks, the Palestinians also showed a willingness to renounce their claim to exclusive sovereignty over the Old City’s flashpoint of the Haram al-Sharif, the sacred compound that includes the al-Aqsa mosque and is flanked by the Western Wall. An international committee overseeing the area was proposed instead.

This was probably the biggest concession of all — control of the Haram was the issue that “blew up” the Camp David talks, according to an Israeli official who was present.

The concessions did not end there, however. The Palestinians agreed to land swaps to accommodate 70 percent of the half a million Jewish settlers in the West Bank, including East Jerusalem and to forgo the rights of all but a few thousand Palestinian refugees.

The Palestinian state was also to be demilitarized. In one of the papers recording negotiations in May 2008, Erekat asks Israel’s negotiators: “Short of your jet fighters in my sky and your army on my territory, can I choose where I secure external defense?” The Israeli answer was an emphatic “No.”

Interestingly, the Palestinian negotiators are said to have agreed to recognize Israel as a “Jewish state” — a concession Israel now claims is one of the main stumbling blocks to a deal.

Israel was also insistent that Palestinians accept a land swap that would transfer a small area of Israel into the new Palestinian state along with as many as a fifth of Israel’s 1.4 million Palestinian citizens. This demand echoes a controversial “population transfer” long proposed by Avigdor Lieberman, Israel’s far-right foreign minister.

The Palestine Papers, as they are being called, demand a serious re-evaluation of two lingering — and erroneous — assumptions made by many Western observers about the peace process.

The first relates to the United States’ self-proclaimed role as honest broker. What shines through the documents is the reluctance of US officials to put reciprocal pressure on Israeli negotiators, even as the Palestinian team make major concessions on core issues. Israel’s “demands” are always treated as paramount.

The second is the assumption that peace talks have fallen into abeyance chiefly because of the election nearly two years ago of a right-wing Israeli government under Benjamin Netanyahu. He has drawn international criticism for refusing to pay more than lip-service to Palestinian statehood.

The Americans’ goal — at least in the early stages of Netanyahu’s premiership — was to strong-arm him into bringing into his coalition Tzipi Livni, leader of the centrist opposition party Kadima. She is still widely regarded as the most credible Israeli advocate for peace.

However, Livni, who was previously Olmert’s foreign minister, emerges in the leaked papers as an inflexible negotiator, dismissive of the huge concessions being made by the Palestinians. At a key moment, she turns down the Palestinians’ offer, after saying: “I really appreciate it.”

The sticking point for Livni was a handful of West Bank settlements the Palestinian negotiators refused to cede to Israel. The Palestinians have long complained that the two most significant — Maale Adumim, outside Jerusalem, and Ariel, near the Palestinian city of Nablus — would effectively cut the West Bank into three cantons, undermining any hopes of territorial contiguity.

Livni’s insistence on holding on to these settlements — after all the Palestinian compromises — suggests that there is no Israeli leader either prepared or able to reach a peace deal — unless, that is, the Palestinians cave in to almost every Israeli demand and abandon their ambitions for statehood.

One of the Palestine Papers quotes an exasperated Erekat asking a US diplomat last year: “What more can I give?”

The man with the answer may be Lieberman, who unveiled his own map of Palestinian statehood this week. It conceded a provisional state on less than half of the West Bank.

Jonathan Cook is a writer and journalist based in Nazareth, Israel. His latest books are Israel and the Clash of Civilisations: Iraq, Iran and the Plan to Remake the Middle East (Pluto Press) and Disappearing Palestine: Israel’s Experiments in Human Despair (Zed Books). His website is www.jkcook.net.

This article was published on ElectronicIntifada.org. A version of this article originally appeared in The National, published in Abu Dhabi.