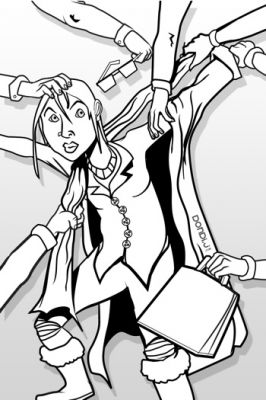 While the initial backlash against the use of full-body scanners in airports has faded, the decision by a Washington, D.C. federal judge in January to allow the Department of Homeland Security (DHS) to refrain from releasing more than 2,000 scanned body images to a civil liberties group has brought the issue back into focus.

The request was part of a Freedom of Information Act lawsuit filed in 2009 by the Electronic Privacy Information Center (EPIC), which described the use of body scanners as “unlawful, invasive and ineffective.” EPIC has already obtained and made public federal documents that describe how body-scanner equipment can store, record and transmit images.

The court’s decision in favor of DHS is just one more instance of the United States’ misguided efforts to prevent terrorist at-tacks. Instead of addressing the root causes of these acts, it seems we are doomed to growing encroachments on our right to travel. Worse, in lieu of requiring an individualized suspicion to justify a bodily search in accord with the Fourth Amendment, our efforts to stomp out terrorism seem certain to spill over into racial profiling.

The court’s support of body scanners and pat-downs in airports will depend on whether or not the searches serve a “special need” and are minimally intrusive compared to this need. Normally, the police need a warrant that is grounded in particularized suspicion, but the special-need exception allows the government to proceed without such proof. One example of this would be DUI checkpoints on highways.

The special-needs exception was established by the U.S. Supreme Court decision in the 1984 case New Jersey v. T.L.O., which upheld a high school’s warrantless search of a teenager’s purse for contraband after she was caught smoking. But in 2009, the high court ruled that this concern doesn’t justify a student’s strip search (Safford Unified School District v. Redding), so at least some of the justices would probably not like to see adults forced to appear virtually naked as they step through backscatter machines at airports.

Though the issue of airport screenings has never reached the Supreme Court, the Ninth Circuit Court of Appeals in California has ruled that such searches must be limited to weapons and explosives. When Samuel Alito was on the Third Circuit, he approved the use of hand-held metal detectors only after a passenger set off an alarm in a magnetometer.

Whether backscatter machines are, in fact, minimally intrusive and effective for the purpose of preventing a terrorist attack remains to be seen.

SEARCHES FROM THE UNDERGROUND

Meanwhile, in New York City, suspicion-less subway searches have been permissible since 2005.

In MacWade v. Kelly, the New York Civil Liberties Union challenged the New York Police Department over the constitutionality of bag searches, arguing that they were too infrequent and haphazard to be effective and violated commuters’ Fourth Amendment rights.

In his ruling on the case, U.S. District Judge Richard Berman stated that searches may be a reasonable precaution against “a substantial risk” of terror attacks at subway stations, airports, courts and government buildings, regardless of whether it is the most effective measure.

In 2009, the NYCLU brought another suit against the NYPD, Sultan v. Kelly, et al., this time on behalf of a 32-year-old native New Yorker of South Asian descent who had been stopped and searched at subway entrances 21 times in the four years of the supposedly “random” program. The suit maintained that flaws in the checkpoint program resulted in racial profiling. What is most revealing is the city’s response to the lawsuit. The plaintiff offered to forgo monetary damages if the city would simply agree to monitor and supervise subway check-points to ensure racial profiling did not occur. The city rejected this offer, twice.

Apparently it preferred to pay damages — using taxpayer money — of $10,000.

The most disturbing part of this trend is the Second Circuit’s ruling that a traveler’s right to privacy is secondary to the government’s efforts to protect public safety. Judge Berman’s comment in his 2005 ruling that he would support the use of body-scanner machines and pat-downs in government buildings is equally troubling.

The fact that the scanners cannot detect plastic explosives concealed by body parts is one reason EPIC urges the courts to ban their use on principle. But perhaps the hysterical claims that body scanners are “government child pornography” will have more impact. As Mark Twain said, “the s’preme court follows the ‘lection returns.”

Ann Schneider is a member of the NYC Chapter of the National Lawyers Guild (nlgnyc.org). The opinions expressed in this article are those of the writer and do not necessarily reflect the position of the organization as a whole.