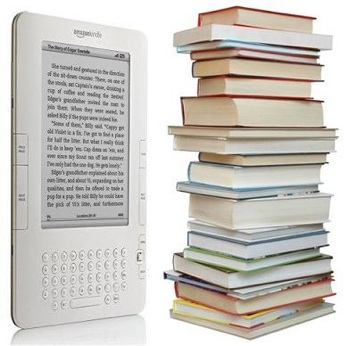 Just as our credit cards are coming in from last Christmas, one bookstore in Portland, Oregon presents an intriguing proposition: trade in your Kindle for paper. Microcosm Publishing is currently offering any dissatisfied recipient of an e-reader the full resale value of their gadget in cold, hard books.

“The idea was that anyone who had unwanted e-readers that were given to them for Christmas can trade them in for books,” said Rio, who manages the Microcosm store in Portland.

“Our customers think it’s hilarious,” said Joe Biel, another member of the collective. “We’ve gotten two this week, and we’re told there are two more on the way.”

Microcosm, a self-described not-for-profit, collectively-run publisher and zine distributor based in Portland and Bloomington, Indiana, is the publisher of titles like Firebrands  and Viva Vegan!.

To determine a Kindle’s value in books, Microcosm works off the current billing price on Amazon.

A quick look at their Facebook page shows mostly positive comments, except one. “Sorry, I’m 99% behind what you guys do, but I have to disagree with this one,” says a user named Paul Ftagn.“I think electronic media and traditional print media can live side-by-side.”

“Even the supporters of the [Kindle] are very quick to point out that in a year there will be a superior product,” says Joe. Also, “the cost in resources and human rights cost isn’t really in the dialogue about it, and on that level the response has been phenomenal.”

As to what will happen to the Kindles they’ll get? “We will clear a spot for them in the store and we’ll mount them on the wall,” along with obsolete cell phones and possibly laser discs, says Joe.

While the jury’s still out on whether books or e-readers present the greater environmental threat (this 2009 article in Mother Jones comes out in favor of the Kindle), Rio says the goal is to “see the technology put to its best use – these [Kindles] were sent in by people who obviously prefer print.”

If you’re one of those people, the offer’s good through Feb. 2.