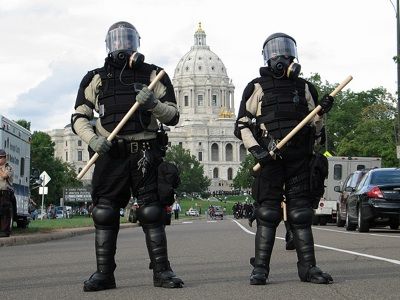 As part of fulfilling a Freedom of Information Act request, Virginia’s Richmond Police Department accidentally released homeland security and crowd control guides—outlining how the police target protesters. The police attempted to secure an emergency court order prohibiting the release of the documents, arguing that they were in the hands of an “admitted anarchist.” But it was too late. They were already posted online. According to journalist Will Potter:

… buried in the training guides are insights into three trends in law enforcement that have been occurring not just in Virginia, but nationally: the demonization of protest, the militarization of police, and turning local cops into “terrorism” officials.

These trends, which Potter outlines in more detail, are a disappointing truth about the perception of activism in this country. As activists rightfully prepare to deal with the expected crackdown, it’s important, however, that they not resert to a militaristic defense—such as wearing body armor and gas masks.

While the inclination to want to protect oneself is understandable, activists must realize how they will be perceived, not just by the police, but by the general public. Images of armored protesters in all sorts of defensive gear, facing off against riot police, will likely not draw sympathy to the cause, but instead more support for the security forces.

Gandhi and King recognized this dynamic and that is why they were adamant that the people in their campaigns present themselves as the ordinary citizens they were—even if that meant enduring physical pain. It’s not a pleasant thought, but if activists are “in it to win it”—so to speak—they must accept that the growing threat they face is an opportunity to prove the justness of their cause, not an opportunity to return violence for violence.