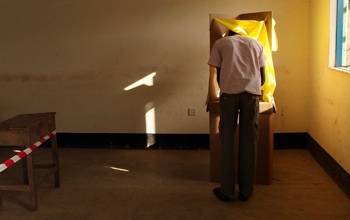 Egypt’s not the only place in North Africa where massive change is afoot. Yesterday, the commission established to run South Sudan’s secession vote officially announced the unsurprising, if overwhelming tally: 99.57 percent of voters in Sudan’s 10 southern states opted for independence. Turnout was a whopping 99 percent. Southern Sudanese voted throughout the diaspora, in eight countries, including the United States. Here, 99 percent of roughly 6,000 voters chimed in for independence, according to the Christian Science Monitor/2). And so, South Sudan will declare independence on July 9, becoming the world’s newest nation. It’ll also likely be the world’s poorest.

Which begs the question: What now? Farid Farid pursued that question for Colorlines at the voting’s outset, a month ago. Farid wrote,

Global interest in the war-torn country initially concentrated on the region of Darfur, where almost five million people have been affected by genocide, either through death, mass migrations or disease. Coming after years of such violence, the southern Sudan independence vote is now drawing the world’s eyes, as we all watch the birth of the globe’s newest country and hope for a peaceful future.

Yet, the unasked question lingers: Beyond these benevolent global sentiments, what will be left of this newly created nation after the euphoria of independence wears off?