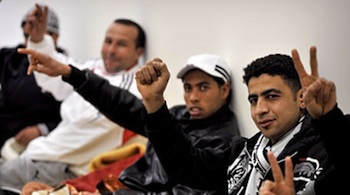 On January 25, three hundred (300) migrants who work in Greece without papers or any civil rights began what is perhaps the largest hunger strike in Greek history.

The strikers are asking for the “legalization of all migrant men and women,” and for “the same political and social rights and obligations as Greek workers.”

The struggle of these migrants highlight the general crisis of migrants and refugees across Greece and Europe.

The Assembly of Migrant Hunger Strikers explain that they came to Greece “to escape poverty, unemployment, wars and dictatorships.” And that they were left no choice other than to repeatedly risk their own lives “to journey towards Europe’s door.”

“I want papers to be able to go to hospital, to be treated as a human being,” explained a 29-year old Moroccan. “I’m fed up with this life without papers.” He has been working “menial” jobs on the Island of Crete for 5 years.

Another hunger striker, who said he found it impossible to obtain legal papers, explained “There is no going back for us. … We will win this fight or we will die.”

With no other way to make their voices heard or demand their rights 250 migrants have occupied an unused building in the Law School of Athens where Police are forbidden by the University Asylum law to enter university grounds.

Another building, the 7th floor of the Labor Center of Thessaloniki, has also been occupied by 50 others.

Even during times of “business as usual”—when elite profit, power, and privilege is not in jeopardy, but the everyday lives of everyone else are—migrants are easy targets for blame and exploitation.

However, as material conditions worsen in Greece due to the current financial crisis, so have the lives of migrants worsened—becoming more precarious.

The statement of the Assembly of Migrant Hunger Strikers explains that the lives of migrants have become even more unbearable as workers “salaries and pensions are cut and prices rise.” Migrants have become targets more often and their lives more vulnerable.

“Far right discourse is reproduced through the media when they talk about us. On issues of migration, the propaganda of fascist and racist parties and groups has become the formal language of the State while their ‘proposals’ have already become government policy: the wall in Evros, floating detention centres and a European army in the Aegean, repression in the cities, massive deportations.”

Under these conditions faced by the striking migrants, it is imperative not to remain silent, and to lend support for the demands of the migrants.

Intellectuals of Greece, Europe, and elsewhere must express their solidarity by lending support for the demands of the migrants and participating in their struggle and defense.

Public expressions of solidarity and support are urgently needed as the deadline for striking migrants to leave the Law School of Athens’ is currently under consideration.

We, the authors, wish to express our solidarity with the 300 migrant workers on hunger strike in Greece. Their struggle is an important part of the struggle for migrant justice and human rights all over the world.

(Signatories are listed here in personal capacity only. If you support this statement, please sign the petition.)

Peter Bohmer (Faculty in Economics at The Evergreen State College, and Olympia Movement for Justice and Peace, Olympia, Washington) – USA

(If you support this statement, please sign the petition.)