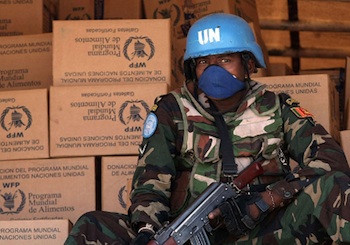 This article was originally published on UpsideDownWorld.org from the Latin America Information Agency.

If any nation in the history of humanity has been terrorized by the naked brutality and hypocritical logic of modernity, it has been Haiti. One would assume that the Haitian Revolution in 1804 would be looked upon as a pivotal moment which helped to shape the ideas of freedom, equality and justice. This was not the case. Haiti has been the victim of both history and hypocrisy, since it’s independence in 1804 as the small nation who fought for the freedom, dignity and justice has been met with a nightmarish hell of slavery, genocide, racism, isolation, extreme oppression and economic terrorism exercised in the name of modern civilization that has not disappeared in the 500 years since Christopher Columbus first landed on the island. The recent turmoil surrounding the Haitian elections on November 28th must be seen as an extension of international support in the undermining of the Haitian people’s right to self determination.

During the 18th century, Haiti, then known as Saint Domingue, became France’s most valuable colonial possession. By the mid 1700’s Saint Domingue became the most lucrative colony in the world, producing more wealth than the 13 colonies of what would eventually become the United States of America[1]. This relationship of exploitation would continue until 1791, when a slave uprising led by Toussaint L’Ouverture began. This thirteen year war led Haiti to become the second independent country in the hemisphere, and the first black republic in the world

In response to the new constitution, France and the United States decided to bleed Haiti to death in a slow and agonizing process. The international powers of France, the United States, England and Holland put aside their colonial rivalries and were determined to strangle this revolution in its infancy, as it had the potential to bring down the whole system of slavery and colonialism. Haiti would not be allowed to become a success, as it would turn the racist, capitalist global order on its head. The only way Haiti could exist was if it was turned into the basket case of the hemisphere. The “failed state” of Haiti that we read about today has been consciously constructed over 200 years by the world’s industrial powers.

In exchange for diplomatic recognition after 21 years of isolation, Haiti agreed to take out a loan from a designated French bank and pay compensation to French plantation owners for their loss of “property,” including the freed slaves – in effect Haiti was paying twice for its freedom; one time with blood the second with money. The amount of the debt totalled $150,000,000 Francs. Today that amount would equal $21 billion dollars[2]. No mention was ever given to the fact that the land and people were both stolen to begin with.

If the economic stranglehold imposed by the international community was not enough, Haiti happened to be the leading target of US intervention in the 20th century. The United States was determined to make sure that Haiti’s economy complemented their own. Haiti was to engage in export agriculture, producing coffee, sugar, cotton and tobacco for American consumption. The US invasion of 1915 brought back slavery to Haiti in all but name and rewrote the Haitian constitution of 1804, giving US corporations free rein.

Haiti may have been the first nation to escape colonialism through revolution, but Haiti also became the first “third world” nation in the traditional sense, as they were poor and overburdened with debt. The Haitian government could not build schools, hospitals or roads because nearly all of the available money went to pay France. In 1915, for example, 80% of government revenues went to debt service[3]. Haiti did not finish paying the loans that financed the debt until 1947[4]. Over a century after the global slave trade was recognized and eliminated as the evil it was, the Haitians were still paying their ancestors’ masters for their freedom.[5]

As Haiti was in a desperate financial position due to economic blackmail, the United States saw it as a potentially dangerous hotspot for “communist subversion”. Under the dictatorship of the Duvaliers (1957-1986), notable public assets such as the railroads, public utilities and the Haitian National Bank were auctioned off to Citibank and the Haitian Corporation of America for next to nothing.[6] When Jean Claude Duvalier was forced into exile in 1986, he reportedly landed in the French Cote d’Azur he had a comfortable net worth $1.6 billion.[7]

It was within this debt riddled framework of the new global economic order, fighting against the unjust demands of the IMF, World Bank and the United States, that led a Roman Catholic Priest named Jean Bertrand Aristide to become Haiti’s first democratically elected president in 1991. Aristide’s grassroots support among the poor of Haiti led to his landslide victory with Fanmi Lavalas receiving 67% of the vote[8].

Aristide led calls for reparation of Haiti’s odious $21 billion debt to France, and was against further rounds of privatization of the Haitian economy. These concerns did not sit well with the United States or France resulting in a coup in September 1991. Due to international as well as internal pressure, Aristide was placed back in power by the Clinton administration but was not allowed to complete a full 6 year term or run for re-election in the next available term. In 2000, Aristide was elected once again, with 91.8% of the vote[9].

Instead of the aid being channelled to the state, the funding was shifted to anti-Aristide NGOs and business organizations like the Group of 184 which operated in the Haitian civil society. Much of the money went into funding anti-Aristide militias – known as “democracy enhancement groups”, who would replace the disbanded Haitian army as a tool of the rich.[10] In February 2004, Aristide was overthrown again by American, French and Canadian backed forces, and sent into exile. The nation was ripe once again for the picking by American corporations.

According to Peter Hallward “the period that began with the military coup of September 1991 is best described as one of the most prolonged and intense periods of counter-revolution anywhere in the world. For the last 20 years, the most powerful political and economic interests in and around Haiti have waged a systematic campaign designed to stifle the popular movement and deprive it of its principal weapons, resources and leaders.”[11]

The devastating earthquake on January 12th and the tragic aftermath is being used as a backdrop of excuses to mask the engineered irregularities of the recent election. The November 28th election is the most recent step in the international community’s attempt to stifle the demands of self determination by the Haitian people. Fanmi Lavalas, by and large the nation’s most popular political party has been banned in every election since the overthrow of Aristide in 2004. The exclusion of Lavalas continued into the November 28th elections based on the party failing to meet last minute technicalities invented by the highly controversial Haitian Provisional Electoral Council – heavily influenced by current President Rene Preval. Fanmi Lavalas and 14 other political parties were excluded from participating in the November 28th elections without any transparent reasoning.

Ignoring reports highlighting the irregularities of the November 28th election from civil society organizations both domestically and abroad, the international community continued to support and finance the highly flawed process. As early as June, the Institute for Justice and Democracy in Haiti issued a comprehensive report titled The International Community Should Pressure the Haitian Government for Free and Fair Elections but the international community did not pay attention to the warnings of political turmoil resulting from their backing of highly flawed elections.

The reasoning behind such vehement support for Haiti’s current flawed elections is simple. There is over $10 billion in reconstruction contracts[12], an amount too large to be trusted to any independent, or heaven forbid progressive candidate who would channel the money into the building of much needed public services and infrastructure which served the Haitian people. What the international community demands from these elections is a President which will rubber stamp any of their self serving development projects. An article in the Washington Post titled “Would be Haitian Contractors Miss out on Aid” further demonstrates the self serving nature of aid to Haiti stating that of every $100 of US contracts, only $1.60 makes it into the hands of Haitian contractors.[13]

There must also be a movement away from the further “NGOization” of the nation, and a strong movement towards the development of public institutions which will serve the most poor and vulnerable. Public health, education and water systems should be priorities for any reconstruction effort – however the plans outlined by the Interim Haiti Reconstruction Committee (chaired by Bill Clinton) simply call for more of the same failed policies which have devastated Haiti. The IHRC is intent on enforcing policies which will turn Haiti into a protectorate of offshore slavery for American garment manufacturing corporations.[14]

The engineered collapse of Haiti through both economic and political action offers an important example of how power shapes relations to the benefit of stronger party through both conditionalities and military intervention. Haiti stands as a devastating example of what is wrong with the current economic order. Haiti has paid the costs over and over again, simply for its people wanting to exercise their right to self determination – whether through rebellion against slavery and colonialism, or through the demands to participate in a free and fair election. All the Haitian people have demanded is freedom and respect – and they have been punished without an equal for these demands ever since.

[2] “Building on the foundation of democracy: an overview of the first two years of President Jean-Bertrand Aristide’s presidency”, February 7 2001-February 7 2003 Embassy of the Republic of Haiti in Washington D.C., 2003