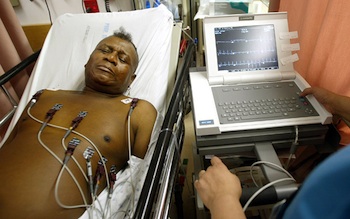 It’s certainly not surprising that the House of Representatives voted to repeal the Obama administration’s historic health care reform bill Wednesday night. For the new Republican House majority, it’s a largely symbolic vote that will likely get thwarted by the Senate. But what’s been stunning is that both sides of the aisle have largely ignored the issue of race.That omission is crucial when you consider that the lack of good, quality health care is among the most racialized policy discussions around. Time and again, statistics have shown that on average people of color are sicker, have less coverage and get worse care.

Take these facts, for example: This month the Centers for Disease Control released an analysis that showed that racial health disparities are more ripe now than ever. Black babies are up to three times more likely to die than infants born to women of other races. Meanwhile heart disease and stroke remain at the core of inequalities in life expectancy between whites and African-Americans.

This sort of mounting evidence of persistent health inequalities has led some officials to call for not just reform, but health equity.

“Access to healthy foods, healthy housing, health care, safe neighborhoods, education and employment opportunities, and transportation – often collectively referred to as social determinants of health – play as important a role in keeping us healthy as they do in making us sick,” Baltimore Health Commissioner Dr. Oxiris Barbot said in a statement last week.

Similarly, studies have shown that people of color are more likely than whites to go without insurance. According to the Center for American Progress, twelve percent of whites are uninsured, while that number is nearly double for African-Americans. For Latinos and American Indians, the uninsured rate is nearly triple that of their white counterparts.

The tally of who lives and who dies from preventable diseases is also a good estimate of how important race is to the health care debate. For instance, asthma rates are highest among black children, who have a 500 percent higher death rate from the disease than white children. On the whole, people of color experience higher mortality rates from certain cancers that are much more amenable to treatment when diagnosed and treated earlier.

Yet the reason that some of those diseases go untreated or under treated has a great deal to do with the type of care patients of color receive when they do visit a doctor. According to CAP, one in five Latinos report not seeking medical care because of language barriers. Kai Wright has reported that the Right’s colorblind attack on health care is a decades-long struggle that’s proved especially costly to patients of color. Pointing to a landmark 2002 study from the Institute of Medicine (IOM), Wright remarked on the poor quality of care offered to folks of color who do have insurance:

[The IOM study] declared that even given the same insurance, the same income and the same type of treatment facility, people of color were less likely to receive quality care. The disturbing gap existed across a wide range of treatments-breast cancer screenings, angioplasties, hip fracture repairs, and on and on. Whites were even more likely to get an eye exam than nonwhites.

The IOM cited a host of complex and dynamic causes for this inequality. There were structural factors, such as financial incentives to limit services given to poor patients; communication factors like missing translators or English-only signage and literature; even factors driven by the patients themselves, whose own beliefs and preferences led them to refuse certain types of care or fail to follow doctors’ instructions. But what grabbed everyone’s attention was the IOM’s charge that at least part of the disparity results from care providers making racist and stereotyped decisions about when and what treatment to offer.

These sorts of colorblind attacks on health care won’t be ameliorated with the passage of one bill, but it seems like a good place to start. While the GOP’s effort to repeal health care reform probably won’t go too far any time soon, it seems like an opportune moment to begin schooling the public on exactly what the bill’s intended to do, and who could benefit the most.