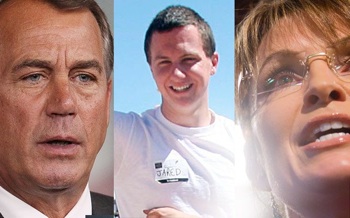 It is sad that in the wake of this weekend’s horrific violence, we begin an absurd debate over whether Sarah Palin pointed her rhetorical crosshairs at Rep. Gabrielle Giffords as gun sights or “surveyors symbols,” as her spokesperson now suggests. It doesn’t matter.

Jared Loughner’s alleged “assassination” attempt should force far broader questions than the semantics of Palin’s hate speech; the right has always preferred that sort of narrowed public discourse about its divisiveness. Rather, the bloodbath in Arizona should give us pause about the enemy-in-our-midst perspective from which the right has both politicked and governed for decades. It’s apparent that Loughner is a troubled young man. But it’s also clear that the right’s ongoing anti-government crusade became destructive long before he fired into a crowd with his legally purchased semiautomatic hand gun.

“Government is not the solution to our problem; government is the problem,” Ronald Reagan famously declared in his first inaugural address. He sought to explain the crippling economic downturn, to which many have compared our recent recession, but he spoke more broadly than economics. He warned that “we the people” must fight government’s “intervention and intrusion in our lives” at all points. “It is time to check and reverse the growth of government, which shows signs of having grown beyond the consent of the governed.”

The great communicator was careful to define his government-vs.-the people perspective as a bizarre sort of unity. He scoffed that “we hear much of special interests” before declaring that we must rally across sectional and racial lines to defeat our own representative government. But the unmistakable implication was that government had been hijacked by those evil “special interests,” something which others called civil rights.

Sarah Palin’s less subtle us-versus-them politics—which she and others have peddled to great profit—are the emotional and intellectual heirs to this notion. Her warnings that there are those in government who don’t represent the “real America” offer a more blunt explanation than Reagan’s for why government is the problem. Sharon Angle’s “Second Amendment remedies” to mythical threats like the onset of Sharia law offer a more wild-eyed solution than the conservative establishment, but it is born of the same perspective: that our government has been corrupted into an enemy of the people, and we must destroy it to save our nation.

The overt violence these ideas stir didn’t start Saturday. Before Giffords ever cast the health care reform vote that drew her into Palin’s sites, the threats of the tea party mobs that filled her campaign rallies had taken life on the steps of the Capitol. They spat at Rep. Emanuel Cleaver and other black congress members, hurled homophobic slurs at Rep. Barney Frank, phoned in graphic threats to several members and vandalized a number of their homes and offices, including Giffords’.

Nor has the violence been limited to elected officials. Mosques are vandalized and Muslim Americans threatened. Reports of hate crimes against Latinos are on the rise. Good luck and the keen eyed policing of a California state trooper is all that prevented mass murder at the Tides Foundation last summer. This weekend, luck ran out.

All of this violence is horrific and worsening, to be sure. But the right’s enemy-in-our-midst politics inflicts a broader destruction on the nation, too. Anti-government zeal has taken a toll that can be measured in tens of thousands of lives.

The question is not whether Palin’s rhetoric has gone too far; plainly it has. The question is whether the right’s government-vs.-the people ideology has reached its natural climax: a government that cannot function enough to keep us safe and a nation defined by anger at itself. At what point will that be understood for the self-destruction that it is?